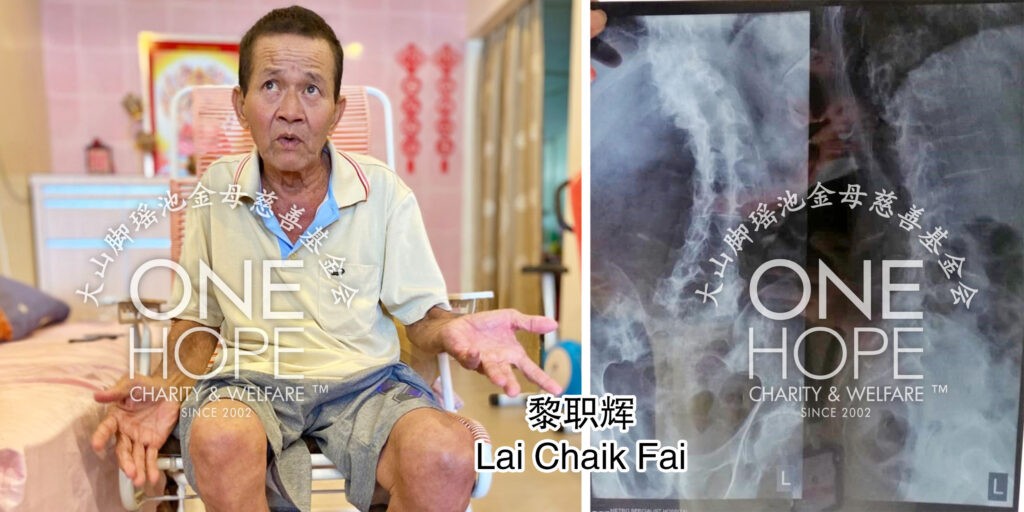 When he was young, he took up a job where he had to jump from a height – to support his family. The sequelae gradually emerged in his old age. The hip bone of his left thigh has damaged and needed a surgery. However, the 58-year-old lorry repair technician could not afford the huge amount of medical expenses, and he hopes that the public could help him so that he could walk again.

Lai Chaik Fai, 58, from Sungai Petani suffered from leg pain about a year ago, and he went to see a doctor. The doctor found out that his left hip bone was damaged, and he needed a surgery to remove the damaged part and get a total hip replacement.

Chaik Fai worked as a repairman at a shipyard in Singapore when he was young, and returned to Sungai Petani in 1993. In order to continue supporting his family, he worked as a lorry repair technician. Due to the job nature, he always had to jump down from the top of the lorry, and carried heavy objects.

He believes that it was the job nature in the past that resulted him to often suffered from body ache. He also suspects that his hip bone damage was most likely caused by his past job. His right leg has begun to shrink, and his right leg is now shorter than his left leg by about two inches.

The damage to his left hip bone has caused him to be in pain and he was unable to sleep well at night. Currently, he is unable to walk on his own. He has to hold a chair and hardly move forward. As he is unable to walk, his family members moved his bed to the living room to reduce the need of him moving around.

When Chaik Fai was young, he managed to make some money from his lorry repairing work, and he was actively involved in charitable works. He has never thought that he would feel ill and doesn’t not have enough money for his treatment when he is old. His income reduced sharply due to the movement control order, which resulted him to finish almost all his savings. He has no other choice but to seek help from One Hope Charity.

Chaik Fai has five children. His four daughters are all married and have their own burdens. His youngest son was a worker at a chain steamboat restaurant, but due to the pandemic, he does not have income at the moment.

After reviewing the case, One Hope Charity decided to help Chaik Fai in raising RM25,000 for his surgery, so that he could undergo the surgery as soon as possible and could resume his normal life.