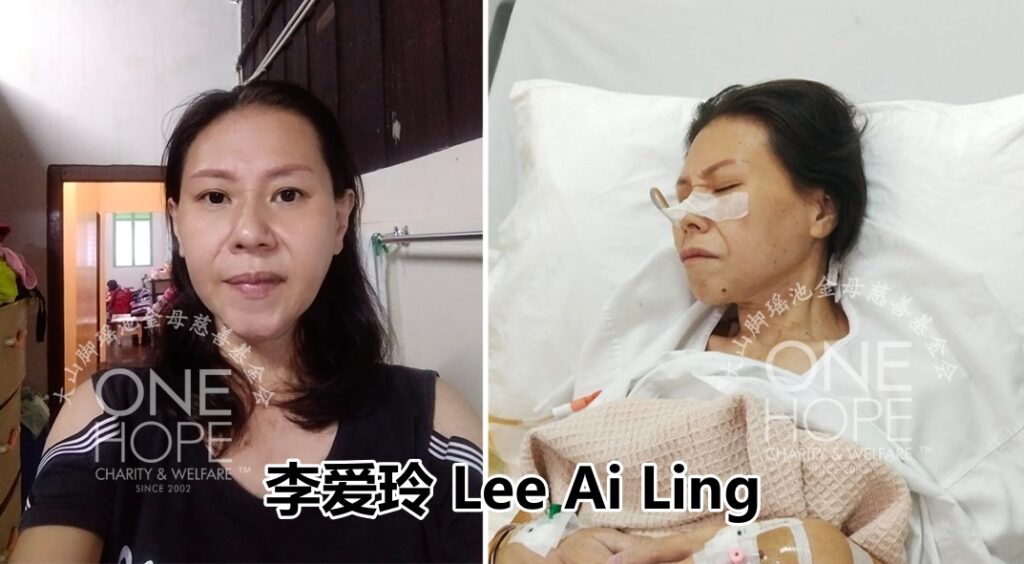 A 42-year-old Chinese woman suffers from menstrual disorder, abdominal pain and sudden weight loss. After going through some examinations, it turned out that her ovarian tumour had occluded the surrounding small intestine, and the small intestine has been swollen, which resulted her to experience abdominal pain, vomiting and diarrhoea. She is in urgent need of RM45,000 for a tumour removal surgery, otherwise, her swollen small intestine will burst at any time, which will put her life in danger.

Lee Ai Ling, a 42-year-old woman from Perak Kuala Kurau, suffered a sudden menstrual disorder in July this year, so she went to a private hospital for an examination. After taking a computed tomography (CT scan), the doctor discovered that she had tumour in her ovary, as well as white spots in her lungs. The doctor suspected that she had tuberculosis and referred her to Seberang Jaya Hospital.

The doctor later confirmed that she did not suffer from tuberculosis, but she still suffered from consistent abdominal pain coupled with diarrhoea. At the beginning, she experienced the symptoms a few days in a week, and her husband took her for treatment at a clinic but it did not help at all.

In mid of October, Ai Ling’s abdominal pain and diarrhoea worsened. Besides having diarrhoea, she would vomit whatever that she ate, and she lost her appetite. This has resulted her weight to drop from 68kg to slightly over 40kg.

The doctor checked her and discovered that her condition was serious, and she must be admitted. After the examination by the doctor, it was confirmed that the tumour in her ovary had occluded the small intestine. The small intestine had been severely swollen and might burst at any time. If she is not treated in time and the small intestine burst, her whole body would be infected with bacteria and her life will be in danger.

Her husband was very worried. He can’t afford to pay or raise the huge amount of surgical fee in a short period of time, furthermore, his wife is in critical situation.

Ai Ling’s 45-year-old husband Ng Seong Huat felt helpless, hence he approached One Hope Charity for help, hoping that One Hope Charity could extend a helping hand so that his wife could undergo surgery in time to save her life.

After receiving Seong Huat’s request for assistance, One Hope Charity immediately conducted a home visit, as well as going to the hospital to check with Ai Ling’s doctor in charge to confirm her condition. The volunteers were told that Ai Ling has not been eating for three days, and they could only wet her lips with water. She is in a very critical condition.

Seong Huat is a runner who helps people to renew their road taxes. He earns about RM1,000 a month. Earlier, he used to work as a guest relations in a bar in Johor, earning  about RM3,000 a month, but due to the change of management in the company, he left in late 2019 and returned to Kuala Kurau. Ai Ling is a housewife and the couple has a seven-year-old daughter Sally Ng.

After reviewing the case, One Hope Charity decided to provide assistance. Based on the priority of saving lives first, arrangement for Ai Ling to undergo the surgery immediately had been done. Her family agreed to authorise One Hope Charity to take charge of the fundraising and collect donations from the well-wishers on their behalf.