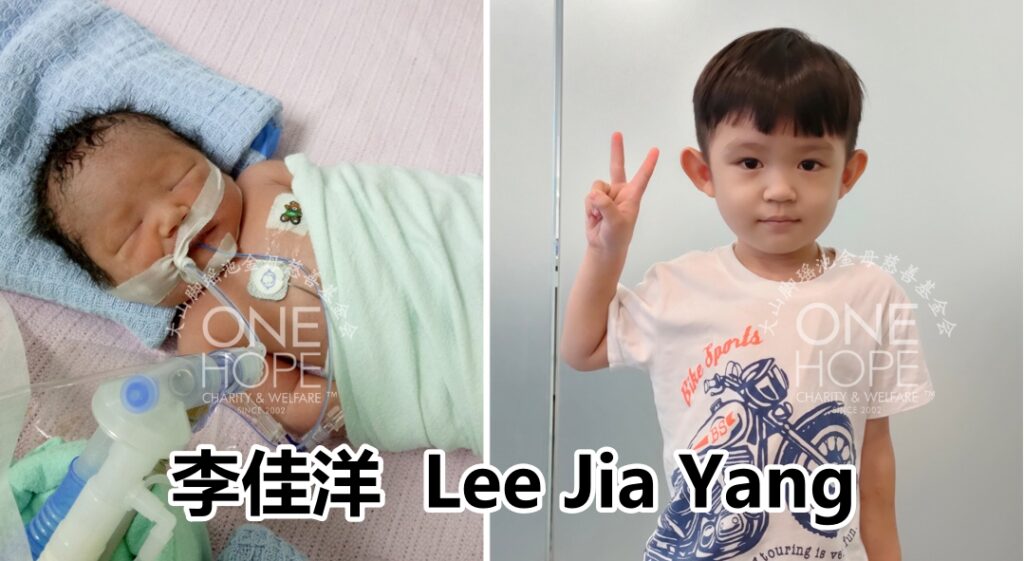 The mother met with a car accident when she was 32 weeks pregnant, and her baby boy, who was born prematurely, was diagnosed with severe congenital heart disease. The baby had a heart surgery when he was a week old, but the heart started to overload as he grew up. And now, the boy needs another heart surgery. However, the four-year-old boy is still short of RM60,000 surgical fee, and his family is hoping for help from the public.

Four-year-old Chinese boy Lee Jia Yang from Masai in Johor was a premature baby. His mother met with a car accident when she was 32 weeks pregnant. In an emergency, the baby was born prematurely but safely with the help of the doctor. As the baby was born prematurely, a series of examinations were conducted after his birth, and the doctor discovered that the baby’s heart was abnormal, and a surgery was needed to save the baby’s life.

His mother Teoh Tze Ee said that the car accident happened when they were on their way home after the family attended her daughter’s dance competition. Their car was hit by a lorry which resulted the car to lost control and hit a big tree by the roadside. Her mother-in-law, three daughters and herself, who were in the car were seriously injured and were rushed to the hospital for emergency treatment.

“At that time, I was pregnant with Jia Yang. After I was sent to the hospital, the doctor helped me to deliver my baby immediately. However, baby Jia Yang was premature and some of his organs were not completely development. The doctor who performed examinations then found out that he had heart problem and needed a detailed examination.”

The Johor General Hospital referred baby Jia Yang to a specialist hospital in Kuala Lumpur for the detailed examination, and the results revealed that his heart and blood vessels were reversed and he needed a surgery as soon as possible to save him.

When Jia Yang was a week old, he had his first surgery. Most of his surgical fees were borne by his family.

After the surgery, Jia Yang went for his follow-up visits regularly. When he was three, the doctor told the parents that his situation was suitable for another surgery. However, the family had spent all their savings in Jia Yang’s first surgery. The huge sum of surgical fee stopped the parents from allowing their son to undergo the second surgery. They could only pray that his heart problem would heal on its own.

However, miracle did not happen. Jia Yang’s condition did not recover as his parents’ wish, but instead, it became even more serious. In a follow-up visit recently, the doctor told them that Jia Yang’s condition has deteriorated and treatment should not be delayed anymore.

Four-year-old Jia Yang is very active. However, he suffers from shortness of breath when he runs around, and this happens very frequently.

His second surgical fee cost RM80,000. The family was intended to save money to treat the child, but due to the Covid-19 pandemic in the past two years, the father’s income from his renovation business has been greatly affected, but the child’s treatment should not be delayed. They have no choice but to come forward and coming forward to seek help from the public.

The boy’s 41-year-old father Lee Tuan Teck runs his own renovation business. He could earn between RM5,000 and RM6,000 a month before the pandemic. However, due to the Movement Control Order, renovation works were not allowed, which greatly affected his income. And now, renovation businesses are allowed to resume recently and he started to get some works. The boy’s 41-year-old mother Tze Ee is a housewife. The couple has three daughters, aged 14, 12 and six. All of them are still studying, and Jia Yang is their youngest son.

After reviewing the case, One Hope Charity decided to help Jia Yang to raise the shortfall of RM60,000 surgical fee. The family agreed to authorise One Hope Charity to take charge of the fundraising and collect donations from the public on their behalf.