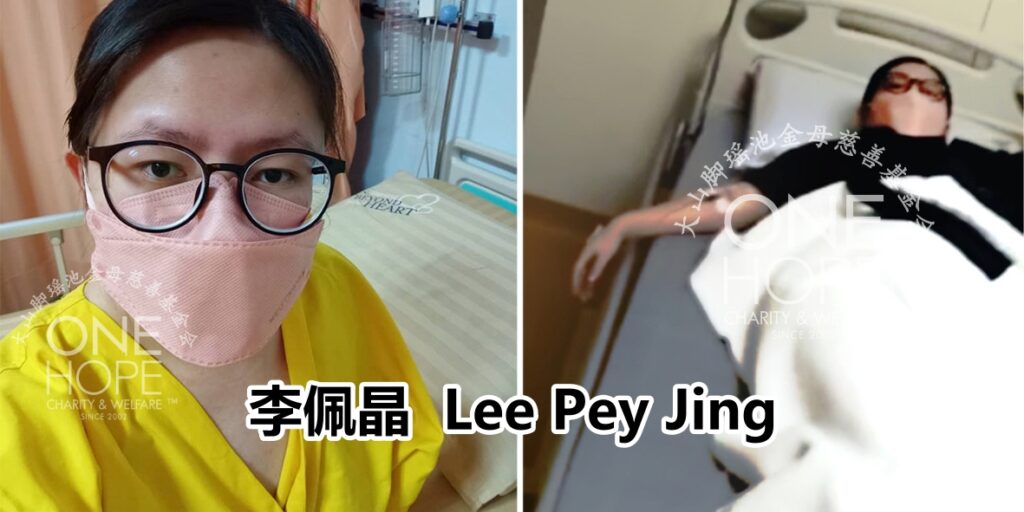 Life is priceless. When Lee Pey Jing found out that her heart disease had worsened, she was not only worried about the huge amount of medical expenses, but also worried that the surgery will leave scar on her chest. She even worried about Covid-19 and decided not to undergo the surgery. However, if she does not undergo surgery in time, her life will be threatened. For her own health and the love for her family, she finally decided to accept the life-saving surgery.

“I will not find any excuses anymore. I want to face all the challenges with courage, and I will not escape. I can’t be selfish, I must be responsible to those who love me, so I hope that you can give me a chance to survive. I am still young, there are still many things I have not done, I don’t want to miss important decisions in my life, so I beg the public to help me!”

【She was a premature baby with congenital heart disease, but she managed to grow up safely. Without showing any symptoms, she was told that she needed a heart repair surgery out of a sudden. She once escaped, resisted, frustrated and disappointed, and she even thought of giving up the surgery】

26-year-old Pey Jing from Ampang, Selangor was a pre-term baby born at the seventh month of her mother’s pregnancy. Due to premature birth, defect was found in her heart defect, and she was diagnosed with patent ductus arteriosus (PDA). She needed regular monitoring and was subsequently referred to the National Heart Institute (IJN) for follow-up.

Her parents were unable to afford the cost of follow-up consultations at that time, and she was only asthmatic and frail due to premature birth, and not showing any other serious symptoms, they did not bring her for follow-up visits after a year. However, the child grew up safely, and after completing her primary and secondary educations, she obtained a bachelor’s degree in accounting and finance. After graduation, she worked as a clerk in a company with a monthly salary of about RM2,500.

In September 2021, Pey Jing had a persistent fever after gastric. During the examination, she was found to have heart problem, and she was transferred to the National Heart Institute for examination. She was told that her heart condition had worsened. She suffers not only patent ductus arteriosus (PDA), but also aortic stenosis, mild aortic regurgitation, and other heart problems. If her heart problems are left untreated, it will not only lead to heart failure but will also affect the other organs to fail.

Due to her critical condition, the doctor arranged the surgery to be carried out in the near future. However, she can’t afford the RM65,000 surgical fee. In addition, Pey Jing is also very concerned about the scar left on her chest after the surgery and is even more worried about being rejected by her future partner. However, she finally overcome all the negative thoughts and agreed to accept the surgery bravely.

Her 61-year-old father Lee Kah Sing worked as a renovation works’ contractor when he was young. Four years ago, when the market was bad, he became a van driver, earning a monthly salary of RM1,500. Her 60-year-old mother Yap Swee Koon is a housewife. The couple have three children – eldest daughter Pey Jing, a 24-year-old daughter, who is still studying, and the youngest son, who just completed his Form 5 and about to seek for a job.

After reviewing the case, One Hope Charity decided to help Pey Jing in raising the medical expenses. Her family agreed to authorise One Hope Charity to take charge of the fundraising and collect donations from the well-wishers on their behalf.