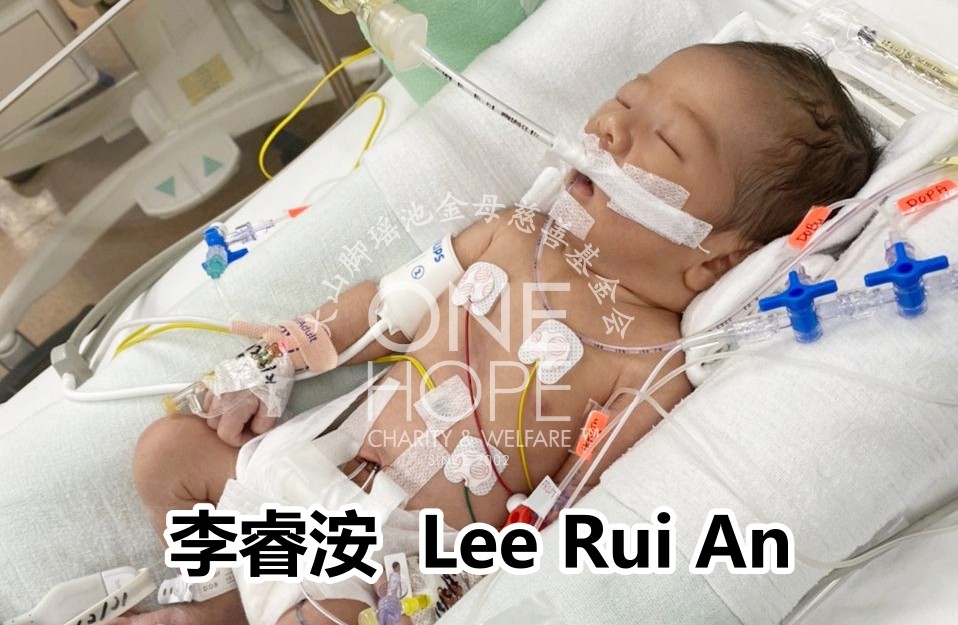 Your help is much needed!

10-month-old baby boy Lee Rui An from Taiping, Perak, was diagnosed with congenital heart disease since he was born. He had underwent two surgeries. However, emergency happened during his second surgery and he needed another surgery within three days. The parents are worried about the RM50,000 surgical fee.

Rui An had his first surgery before one-month-old. He had his second surgery on December 3 due to cyanosis. Unexpectedly, emergency happened and he needed a third surgery.

His parents spent all their savings on the two surgeries amounted to RM130,000. And now, he needs a third surgery that cost RM50,000. As the parents are unable to afford the surgical fee, hence they approached One Hope Charity, hoping to raise funds and gather blessings to save their son.

【Although he had undergone several surgeries at a young age, but he is still resilient and showing strong will to survive】

During her mother’s pregnancy, he grew up steadily and normally. Baby Rui An was born on February 12, 2021, but he was found to have cyanosis and breathing problems on the same afternoon. He was transferred to Taiping Hospital, and later referred to Serdang Hospital for thorough examination. The baby was diagnosed with atrioventricular septal defect (AVSD), double outlet right ventricle (DORV) and other rare and complicated congenital heart problems.

The parents were told that the child needed three surgeries in different stages of growth. While waiting for the scheduled surgery, he was treated in the intensive care unit. However, his blood pressure dropped drastically, and the doctor told the parents that the baby’s condition was critical and he even might die. The parents were distraught. They found out that a specialist hospital in Kuala Lumpur might be able to treat their child and they sent their son to the hospital for surgery immediately. The child underwent BT-Shunt surgery on March 12 to increase his pulmonary blood flow and blood oxygen saturation. The RM70,000 surgical fee then was borne by the parents.

The child returned home after being discharged from the hospital, and he also went for regular follow-up visits. During his regular follow-up visit on November 30, the doctor discovered that the child had cyanosis and a second surgery was arranged on December 3. The parents also paid for the surgical fee amounted to RM60,000.

Unfortunately, he had severe obstruction of bilateral Glenn shunt at the anastomosis site, which required urgent re-do surgery to relief the obstruction. The parents are worried as they are unable to afford the RM50,000 surgical fee.

His 28-year-old father Lee Yi Kai and 27-year-old mother Low Kah Kah are involved in online businesses, earning about RM5,000 to RM7,000 a month. The couple also has another two-year-old son.

As the parents are taking care of the baby in the hospital, the baby’s uncle represented the parents to attend the press conference.

After reviewing the case, One Hope Charity decided to assist baby Rui An in raising the RM50,000 surgical fee. His parents agreed to authorise One Hope Charity to take charge of the fundraising and collect donations from the well-wishers on their behalf.