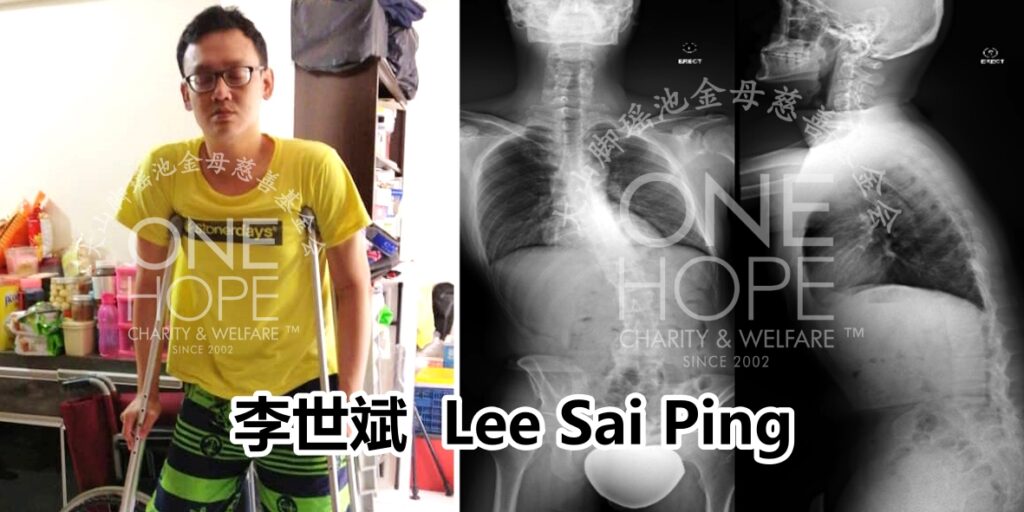 This is the best time for him to propel his career, but unfortunately, he was diagnosed with Kyphoscoliosis secondary to Ankylosing Spondylitis, which resulted in scoliosis. What’s worse was the severe pain that hit him, which made him wanted to end his life. However, the concern of his family motivated him, and he decided to undergo the high-risk corrective surgery, but he can’t afford the RM38,000 surgical fee.

35-year-old Lee Sai Ping from Kepong, Kuala Lumpur, has been suffering from back pain since he was in his 20s. Although he tried to seek treatment in various hospitals but the doctors failed to determine the cause and only prescribed painkillers to him.

Sai Ping is a car mechanic. He often needs to bend over and carry heavy objects. Whenever the pain suddenly strikes when he is at work, he can only take painkillers to relieve the pain. In June 2019, his condition deteriorated and the curve in the cervical spine worsened.

Earlier, he went to a hospital for treatment, but the doctor later referred him to a specialist hospital. The examination report revealed that he suffers from Ankylosing Spondylitis, which resulted the scoliosis to worsen.

The doctor suggested him to undergo a surgery. If he does not undergo the surgery, the scoliosis will press on the nerves and internal organs, and this will cause Sai Ping to gradually lost his mobility and become paralysed. Although there is also a risk of paralysis after the surgery, but there is also the possibility of recover, so, he decided to give it a go.

【The surgery was delayed many times due to the pandemic, and his mobility is greatly being affected】

The surgery was originally scheduled in 2020, but at that time, the Covid-19 was very serious in the country, so the surgery was delayed again and again. During this period, Sai Ping’s condition deteriorated and he was once unable to walk. Later, he relied on his own willpower and managed to walk again slowly with crutches.

Sai Ping said that he suffered from ankylosing spondylitis when his career was in full swing. He was very depressed and even wanted to end his life. Fortunately, he found the strength to continue survive, thanks to the comfort and support from his family.

He said that the boss of his previous job appreciated his services very much. Unexpectedly, he became unwell and the pain in his body forced him to stop working, which made him despair.

“My family has been supporting me, comforting me all this while, which enabled me to start thinking positively. Now, I can finally undergo the surgery and I hope that all generous individuals can help me.

He needs to undergo a surgery as soon as possible but he and his family are unable to afford the RM38,000 in surgical fee. Hence, he approached One Hope Charity for help.

His 66-year-old father Lee Tek Hing was an excavator operator, but lost his job after the pandemic. Due to the age factor, he is unable to secure a new job. His 61-year-old mother Tan Ching Yan is a housewife. Sai Ping’s siblings are all married and they have their own commitments, so they are unable to afford the fee as well.

After reviewing the case, One Hope Charity decided to help Sai Ping in raising the surgical fee. His family agreed to fully authorise One Hope Charity to take charge of the fundraising and collect donations from the well-wishers on their behalf.