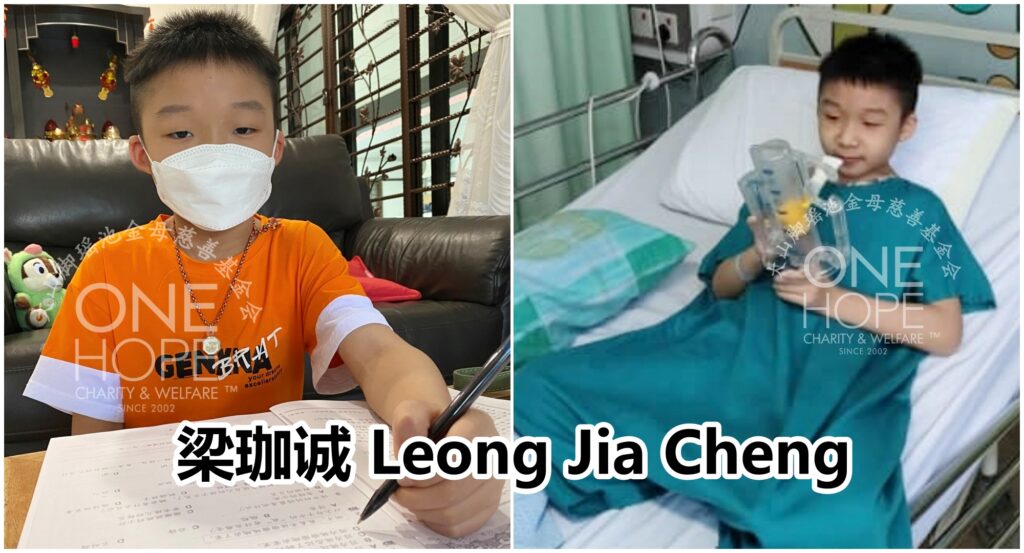 A nine-year-old boy was discovered to have hidden heart disease after he fell ill five years ago. Although he did not show any symptoms but his condition was found to have deteriorated during a recent follow-up visit. He needs to undergo a surgery as soon as possible but he still short of RM35,000 for his surgery

Five years ago, the boy fell ill which later revealed that he has a hidden heart disease. Although he did not show any signs or symptoms of heart disease, but his condition was found to have deteriorated during a recent follow-up visit. The doctor suggested him to undergo a surgery as soon as possible, otherwise, his heart will gradually fail.

Nine-year-old boy Leong Jia Cheng from Sungai Petani in Kedah, was found to have a hole in his heart when he was four years old. However, the doctor then believed that the hole could be closed on its own. Recently, his condition has deteriorated and he must undergo a surgery which cost RM65,000 soonest possible, but his parents can only afford RM30,000. The parents are hoping that they public can help them with the shortfall of RM35,000 so that their son can get rid of the heart disease and grow up healthily.

When Jia Cheng was born, everything was normal. The doctor did not detect any heart problems in him. However, when he was four years old, he fell sick and he went to a clinic for treatment. Unexpectedly, the doctor heard a murmur in his heart and suspected that he has heart problems, so he was referred to a heart specialist.

After the diagnosis by the cardiologist, little Jia Cheng was found to have a hole in his heart, but his condition was not serious at that time, and the hole might be closed on its own. He also did not need to take medicine to control his condition. What he need was only to go for regular follow-up visits once every six months. The parents also followed the doctor’s instructions and brought Jia Cheng for his regular follow-up visits as scheduled.

Even though Jia Cheng suffers from heart disease, but he has never had any symptoms. He also does sports as usual during physical education classes at school. Just like other children, he is active, and he does not experience shortness of breath, or cyanosis or any other symptoms.

In 2020, Malaysia started to impose the Movement Control Order (MCO) and crossing to other states were not allowed. And as Jia Cheng did not show any symptoms, his parents did not bring him for his regular follow-up visits. Until January this year, his parents brought him back to the hospital for a follow-up, and the doctor discovered that the hole in his heart has become larger. He was referred to a government hospital and the parents were told that the government hospital has a device that can repair the hole in the heart without having the need to be operated.

After seeing him, the doctor at the government hospital discovered that the hole in his heart is very close to the heart valve and the procedure can’t be performed on him. He was referred to a pediatric heart specialist. Jia Cheng’s heart problems are ventricular septal defect (VSD) and right coronary artery valve prolapse, so he must undergo a surgery in the shortest time, otherwise his life might be in danger at any time. The surgery fee is RM65,000.

His 48-year-old father Leong Boon Chong and 47-year-old mother Ng Lee Peng operate a lighting shop in Sungai Petani. They earned about RM10,000 a month before the pandemic, but the MCO greatly affected their business and they had to rely their previous savings to support the family’s cost of living. Although businesses are allowed to operate now, but their sales volume is no longer as good as before.

The couple has two sons – the elder son aged 17 and Jia Cheng is their younger son, aged nine. The husband has to pay for the expenses of his paralysed mother. He is overwhelmed with the huge amount of living expenses, and now, the son needs to undergo emergency surgery, but he can only afford RM30,000 and cannot afford the remaining RM35,000.

After reviewing the case, One Hope Charity decided to assist Leong Jia Cheng in raising the shortfall of RM35,000 medical expenses he required. The family agreed to authorise One Hope Charity to take charge of the fundraising and collect donations from the well-wishers on their behalf.