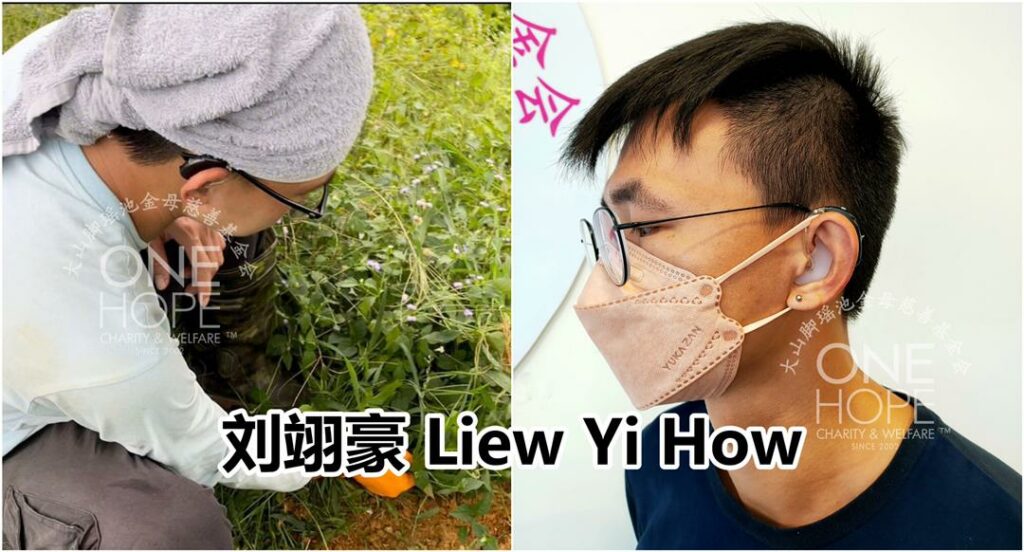 A student’s life is supposed to be memorable, but for Liew Yi How who suffered from hearing loss, it was a time when he always did not want to look back. When he started work, he also lost many job opportunities due to his hearting problem.

However, Yi How often being bullied and ridiculed for the past 20 over years. He even lost his job due to poor communication caused by his hearing impairment. In order to be self-reliant, he resolutely decided to undergo a cochlear implant surgery. The doctor also determined that his left ear is suitable for the cochlear implantation. However, he is still short of RM30,000 in medical expenses so he needs the help from kind-hearted individuals. He is still young, please help him so that he can continue to contribute to the society.

【He worked as a waiter, glass installation worker, car air-conditioning mechanic and other jobs, but he encountered communication problems due to his hearing problem, and he was even been scolded by his employers】

During his school days, his learning progress was affected due to his hearing impairment, he was also bullied and ridiculed by the other schoolmates. He did not have many friends since young, but he has a few friends who always supported and encouraged him.

After completing his secondary education, he continued with a car air-conditioning course in a technical college. After graduating, he started working but his career path was not smooth due to the hearing problems. In his last job as a car air-conditioning mechanic, Yi How could not hear the request from his boss and he was scolded as he failed to fulfil the task. In addition, his work required him to listen to the sound of the air conditioner, so he was forced to resign.

And now, he decided to stay away from the hustle and bustle of the city and went to Raub in Pahang to help his relative in the durian plantation. He earns RM2,000 a month, which is enough to cover his own expenses. He also did not give up on himself. He was actively looking for treatment. And now, the doctor suggested him to undergo cochlear implant surgery on his left ear which cost RM88,000.

His parents purchased savings insurance for him since he was young, so he decided to discontinue the savings insurance and withdraw RM58,000 to pay for the cochlear implant. He is still short of RM30,000 that needs help from the public. As he holds a disabled person card, his surgical fee, hospital admission fee and other expenses will be borne by the government.

Yi How’s 56-year-old father is a heavy machine salesman, and his 51-year-old mother is a housewife. His 28-year-old sister is an administrative staff earning slightly more than RM2,000. Three of them are living in Kepong, and Yi How is currently staying in Pahang.

After reviewing the case, One Hope Charity decided to raise the medical expenses that Yi How needs. His family agreed to fully authorise One Hope Charity to take charge of the fundraising and collect the donations from the well-wishers on their behalf.