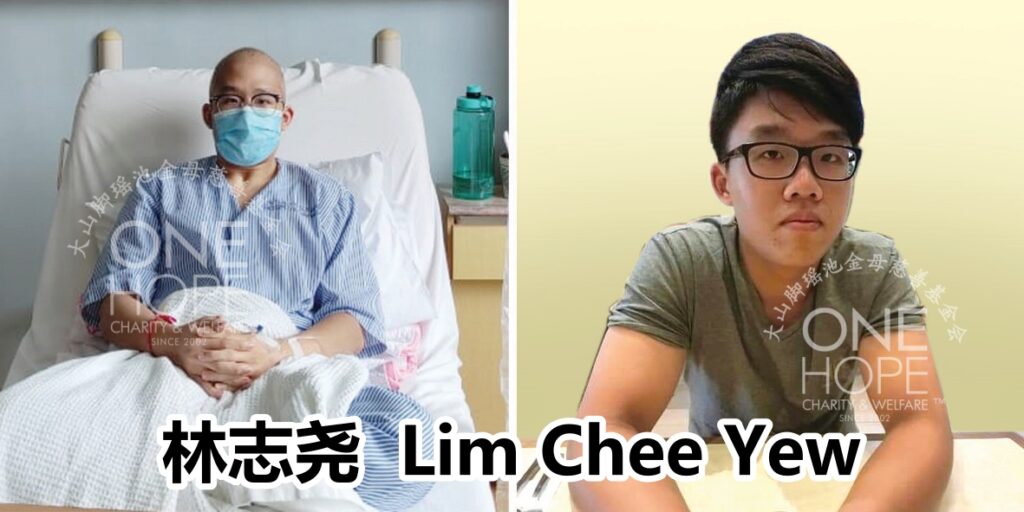 A 25-year-old young man suffered from blood cancer and he urgently needs RM230,000 for bone marrow transplantation. He hopes that kind-hearted individuals can lend a helping hand and to give him a miracle of hope to expend his life.

Lim Chee Yew from Kuala Lumpur, who worked as an auditor, was supposedly having a happy and promising life. However, everything changed drastically when he was diagnosed with leukaemia (blood cancer) in April this year.

After he graduated from college in accounting, Chee Yew started his career as an auditor. In the eyes of many, he was an outstanding young man with a bright future. At the same time, he has a girlfriend who has been in love for many years. They planned to work hard together and to build up their careers, and then form their own family after a few years. However, he fell ill suddenly since last year, which brought huge changes to his life.

After being diagnosed with leukaemia, he started the chemotherapy. However, the treatments did not achieved its expected effect. Until May this year, he had repeated fevers. At first, the doctor suspected that he was infected with Covid-19. After detailed examination, the doctor discovered that even after the chemotherapy, the cancer cells in Chee Yew’s blood increased instead of decreasing. Therefore, he must undergo bone marrow transplantation. This is the hope for him to continue his life.

【His body weight dropped suddenly by about 30kg. After examination, he was diagnosed with leukaemia】

Chee Yew suffered a sudden weight loss last year. He didn’t take it seriously at first, and thought that it happened due to tiredness. Little did he know that he had already fell ill at that time, and more symptoms shown up after that.

In January this year, he went for blood test. After some tests, the doctor told him that there was a problem with his blood and suggested him to undergo a detailed examination. The report was released in April and he was diagnosed with leukaemia. The news was like a bolt from the blue to him.

Chee Yew once distraught and refused to seek medical treatment. Fortunately, his family and girlfriend have never gave up on him. After persistent persuasion, he decided to accept chemotherapy to extend his life. And now, he has found a matching bone marrow, however, he needs a huge amount of medical expenses for the bone marrow transplantation.

He hopes and pleads the generous individuals to help him, so that he can raise the medical expenses to undergo a successful bone marrow transplantation, and then regain health and return to work and serve the community.

Chee Yew’s father Lim Thiam Chuan is a welding worker, and he is currently unemployed due to the pandemic. His mother Tee Lian Geok is a housewife. His sister Lim Jie Shin is a financial analyst, earning RM3,000 a month to support the family. After Chee Yew quitted his job, he is now relying on his savings to support his cost of living. However, none of his family can afford the huge amount of medical expenses.

After reviewing the case, One Hope Charity decided to raise RM230,000 for Lim Chee Yew’s medications. His family members agreed to authorise One Hope Charity in taking charge of the fundraising and collect donations from the well-wishers on their behalf.