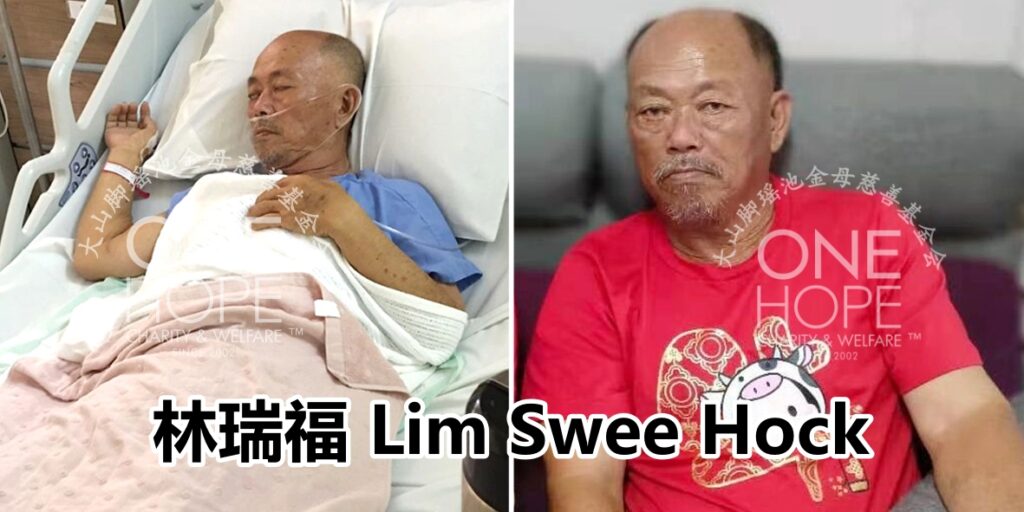 A 63-year-old fisherman thought that he would be able to enjoy life after his children grow up. Unexpectedly, he was diagnosed with lung cancer and the cancer cells had spread to the brain. The medical expenses earlier have depleted his children’s savings, but now, he needs to rely on precision medicine to control his condition. His children begged the public to donate RM55,000 so that their father can continue to take the precision medicine to prolong his life.

63-year-old fisherman Lim Swee Hock from Tanjung Piandang, Perak, was diagnosed with lung cancer and it has spread to the brain. As his condition was not suitable for surgery and chemotherapy, the doctor suggested him to take precision medicine to shrink the tumor. He has sold his fishing boat to treat the cancer, and his family borrowed money to pay for his medication for two months.

Swee Hock’s condition has greatly improved since he started taking the oral medication in December last year. He was bedridden, unable to eat, cough and experienced shortness of breath in the beginning, but he can get out of bed and walk after taking the medicine for a week. He can also eat, take care of himself, speak, and think clearly. When he returned to the hospital for a follow-up visit early this year, the doctor was surprised by the improvement of his condition.

Swee Hock needs RM55,000 in medical expenses. His family hopes that the public can help them, so that he can continue taking the medicine to prolong his life and give him a chance to give back to the society. Please help him!

【He was bedridden and very weak, but after taking the precision medicine, he can take care of himself, eat and drink, and even get out of bed and walk. These improvements have boost his confidence in fighting against the cancer】

Swee Hock started coughing, fatigue and weak in his legs since October last year. He was once experienced asthenia and confused and was unable to walk. His family suspected that he suffered a stroke and sent him to the hospital for treatment. After examination, the report revealed that he has a 4cm tumor in his brain. The tumor pressed on the nerves and weakened his right hand and foot, resulting his family members to mistaken it for a stroke.

He underwent a detailed examination the next day, and was diagnosed with lung cancer, and the cancer cells had spread to the brain. As the tumor is too large and has pressed on the nerve, affecting his mobility, movement, speech ability, so the doctor did not recommend him to undergo surgery and biopsy.

In November last year, he had chest and back pain. He coughed up blood and was sent to the hospital for treatment. After examination, it was found that his blood oxygen level was low, his body was deficient in water and salt, and his blood was infected with bacteria. He then underwent antibiotic treatment. As his body was too weak, chemotherapy was not recommended so the doctor suggested him to take precision medicine for a year. The medicine is effective in shrinking the tumor.

He underwent five sessions of radiotherapy, resulted him to be unable to walk and swallow. Hie condition was not well, and the hospital once referred him to the hospice ward.

Swee Hock was a fisherman. He worked hard to earn enough money to buy a fishing boat. Together with a few crew members, they fished in the ocean to earn a living. After the tsunami in 2004, the amount of catch reduced, and his earned about RM2,000 every month. After he fell ill, he was forced to sell his fishing boat for medical expenses. His 63-year-old wife, Lai Hoong Chin helps people to peel shrimps for some extra income for the family. They have four children who work for the others. They share the living expenses of their parents, but they are helpless as they are unable to afford the huge amount of medical expenses.

Swee Hock still needs RM55,000 for the precision medicine for 10 months. After a home visit and reviewing of the case, One Hope Charity decided to help him in raising the medical expenses. His family agreed to fully authorise One Hope Charity to take charge of the fundraising and collect the donations from the well-wishers on their behalf.