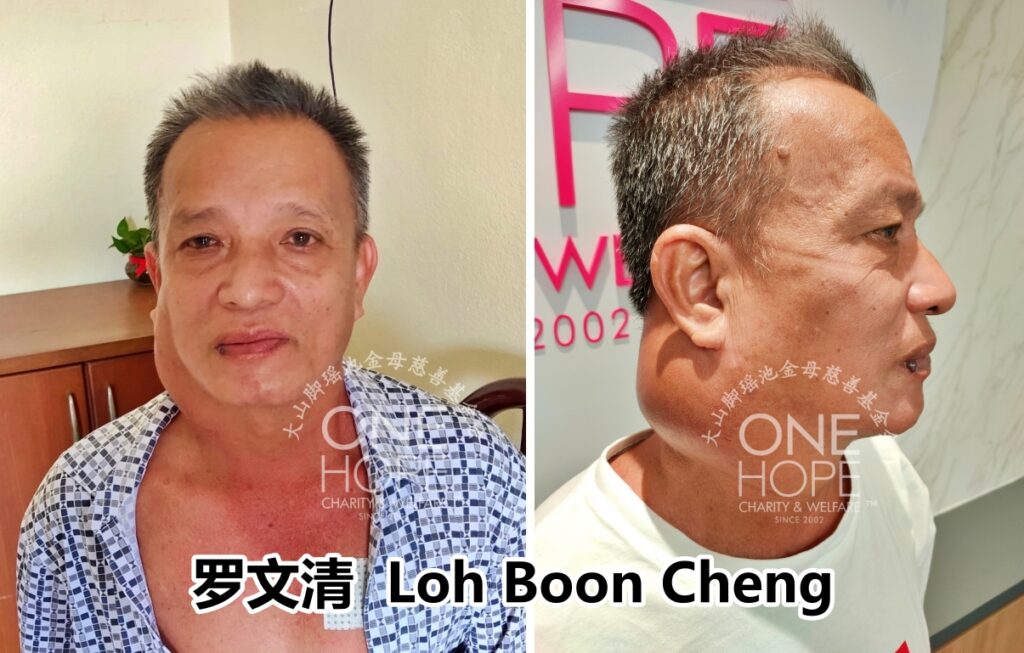 He did not care much about the 5cm lump on his neck five years ago. However, the lump grew into the size of a fist in July this year, and he was diagnosed with third stage of lymphoma. The 61-year-old loving father needs RM25,000 for a seven-week-long chemotherapy, and his children hope that the public could assist in saving their father.

61-year-old Loh Boon Cheng from Bukit Merjatam, Penang, had a 5cm lump on his neck five years ago. He ignored the lump then as it did not cause discomfort to him. However, the lump on his neck started to grow since mid of July, and now, it is almost the size of a fist. He went to a hospital for examination and was diagnosed with stage III lymphoma cancer.

He needs to undergo 35 rounds of radiotherapy and six rounds of chemotherapy, which will be performed simultaneously and alternately. The seven-week-long treatment course cost RM25,000. He hopes that the public could lend him a helping hand.

【Boon Cheng has two children who are still schooling. He knows that his responsible as a father has not completed. He hopes that he could give back to his family and society after he recovered from cancer】

In the eyes of his children, Boon Cheng is always a loving father. Although he did not receive high education qualification but he played a crucial role in the growth and development of his children by teaching them the principles of life and cultivate them with good moral.

And now, he has been diagnosed with stage III lymphoma, and he needs to undergo seven weeks of radiotherapy and chemotherapy. After learning about his health condition, his relatives and friends helped him with about RM10,000. However, the sum had already been used up for his examinations and treatment deposits. He does not have extra money for the treatment course.

Boon Cheng is a cement worker. The pandemic has affected his livelihood. His 50-year-old wife works as a temporary factory operator. As her job is uncertain, she earns about RM1,000 a month. Their 21-year-old eldest son is a salesman earning slightly more than RM1,000. Their 20-year-old second son was a temporary working at a factory, but he was retrenched due to the pandemic. As he is unemployed now, he is responsible for sending his father for treatments.

The couple also has two daughters, aged 17 and 15, who studies in Form Five and Form Three respectively. The family of six relies on the income of their mother and eldest brother. They did not have savings or extra money for their father to undergo the treatment course. Hence, they approached One Hope Charity for help.

After reviewing the case, One Hope Charity decided to provide the assistance he needed. The family agreed to authorise One Hope Charity to take charge of the fundraising and collect donations from the well-wisher on their behalf.