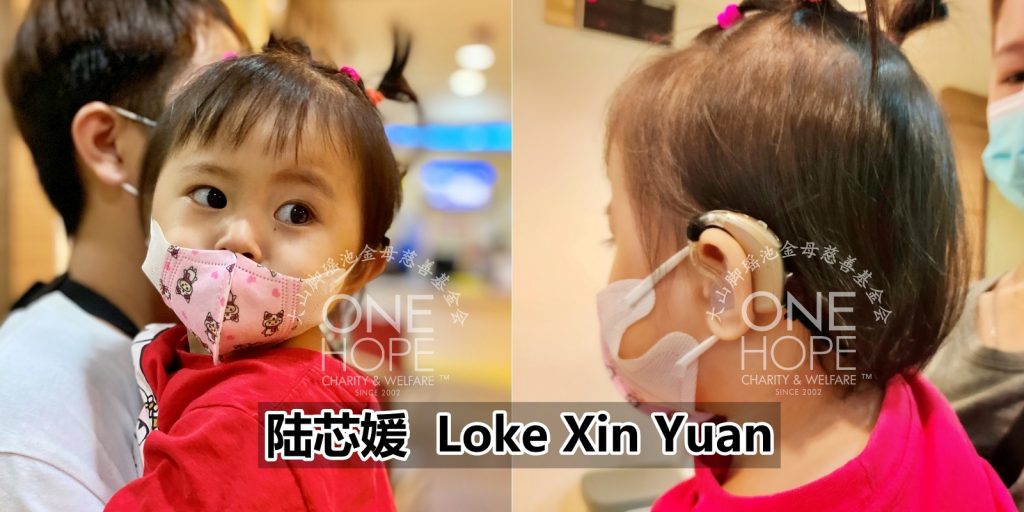 She is lively, adorable and joyous but she could never hear her own laughter. She needs the help from everyone to bring her out of the silent world and grow up with beautiful voices around her.

Two-year-old Loke Xin Yuan is very adorable. Although she might look similar to any other children of the same age, but the reality is that she is born with hearing defects, and she needs cochlear transplantation in both her ears in order for her to hear.

In February last year when Xin Yuan was about seven months, her grandparents realised that she could not sit steadily, her mother who was in Singapore was worried. She returned home to take care of little Xin Yuan.

During Chinese New Year, Xin Yuan’s parents and grandparents also discovered that she did not react to the huge noise produced by firecrackers. It was when they started to suspect that Xin Yuan is suffering from some hearing problems.

After that, her family members also tested her by banging the door in front of her, but Xin Yuan did not respond at all. After confirming that Xin Yuan could not hear, they brought her to the hospital for hearing test.

After several assessments, doctor confirmed that Xin Yuan was almost completely deaf and she could only listen to very little sounds. Doctor advised her to wear a hearing aid to improve her hearing.

Hearing is very important for a child as it would affect a child’s language and social development in the future. Therefore, the earlier the cochlear implantation is being done, the lesser the impact of hearing loss will be. The total cost of the cochlear implantation surgery for both Xin Yuan’s ears is RM190,000 and the family could only afford RM80,000. They are still lack of RM110,000 surgical fund.

Her mother Chan Sook Yin, 23, was a hairstylist in Singapore but she had resigned and return to Malaysia in February last year after her daughter could not sit steadily. The doctor then worried it might be related to Xin Yuan’s bone development issue. After that, Malaysia had implemented the Movement Control Order (MCO) and she could not return to Singapore anymore. She is now staying at home taking care of Xin Yuan.

Her 27-year-old father Loke Tze Yeong is an employee at a curtain shop, earning about RM2,000 a month. However, his job is being badly affected by MCO. He has to stop the job at the curtain shop at the end of this month and seek for a new job. Xin Yuan is their first born.

After reviewing little Xin Yuan’s case, One Hope Charity decided to help her to raise RM110,000 fun for her cochlear implantation surgery, so that she found hear the beautiful noises around her as soon as possible.

Her family agrees to allow One Hope Charity to take charge of the fundraising and collect donations from the well-wishers on their behalf.