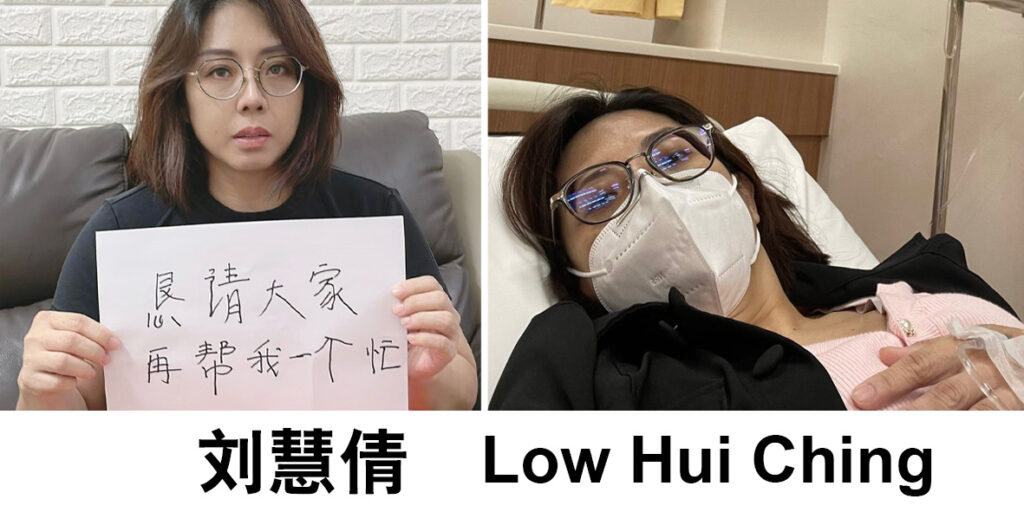 Internet celebrity pastry chef Low Hui Ching has advanced colorectal cancer treatment and needs to change the targeted drugs and increase the dose. She begs the public to help her once again by donating RM150,000 in medical expenses for her targeted therapy treatment.

In October last year, Hui Ching had a recurrence of colorectal cancer and raised RM150,000 for her chemotherapy. She has undergone three months of first-stage chemotherapy and her condition has been controlled and improved. The cancer cells have softened but the tumor has not shrunk. Fear of recurrence and other variables, the doctor recommends her to undergo targeted therapy and increase the dose to avoid the proliferation and spread of cancer cells, as well as limit the growth and control the number of cancer cells.

The targeted therapy drugs are costly, but 46-year-old Hui Ching and her 57-year-old husband are unable to afford the medical expenses as they do not have any source of income. Hui Ching is sick and is unable to run the cake and pastry shop, while her husband, is a retired bank employee. In order to provide her with a chance to survive, the couple decided to approach One Hope Charity once again, with the hope to raise funds for her treatment.

Last year, One Hope Charity helped Hui Ching to raise funds for her medical treatment. After the early stage of chemotherapy, the colorectal cancer cells were under control and her overall condition has greatly improved. Considering the effect of chemotherapy for the first three months which led to positive improvement to her condition, such as the improvement of the fatty liver index and the ability of her doing simple outdoor exercise, One Hope Charity had a meeting and decided to help her and her family once again by raising funds for her targeted treatment, with the hope that she can recover after the advanced treatment, so that she can return to her job as a pastry chef, and to take care of her pair of 12-year-old dizygotic twins of different genders and an 11-year-old daughter.

The new cancer treatment plan for Hui Ching, which is to replace the targeted treatment drugs and increase the dose, requires RM200,000 in medical fees. The RM150,000 raised in October last year was originally used for radiotherapy and chemotherapy. However, due to the need to change her drugs and increase the dose in the middle of her treatment, Hui Ching’s medical fees increased. The remaining RM50,000 from the funds raised earlier is not sufficient to cover the new treatment expenses. Hence, she begs the public to help her again with RM150,000.

Hui Ching said that although the cancer cells have softened but the tumor has not shrunk after the chemotherapy. Fear of recurrence and other variables, the doctor-in-charge suggested her to use anti-cancer targeted therapy drugs. However, the new treatment plan is costly, which left her at a loss and dare not make any decisions.

She added that her treatment fees came from the public, which have given her a hope to continue survive. After the completion of the new treatment course, in addition to going back to the private hospital for regular follow-up visits, she will also be transferred to a government hospital for examinations.

Earlier, Hui Ching needed five hours for each chemotherapy session. As for radiotherapy, although it only lasted for about 10 minutes, but the side effects of radiotherapy were far more severe than chemotherapy. She once had diarrhoea until she suffered from dehydration. Thinking that her children still need a mother, she has to ask for help to raise funds, and continue to stay strong for her treatment, which will be held once every two weeks.

After reviewing the case, ONE HOPE CHARITY decided to help her in raising the RM150,000 in medical fee. The family agreed to authorise ONE HOPE CHARITY to take charge of the fundraising and collect donations from the well-wishers on their behalf.