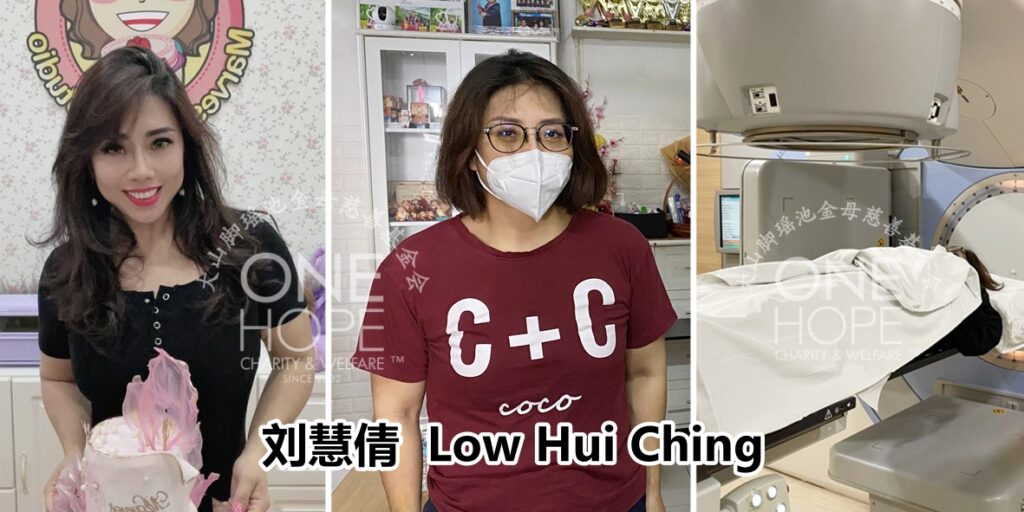 Please help her. A pastry chef has a recurrence of colorectal cancer and urgently needs RM150,000 for her medical expenses!

45-year-old Low Hui Ching is a pastry chef in Bukit Mertajam. She has three young children. Her only hope now is to receive donations from generous individuals, so that she can start her treatment quickly to extend her life and continue to raise her children.

Hui Ching was a well-known pastry chef before her fell ill. She made countless themed cakes by hand and her artworks were hyper-realistic and creative, such as cakes that imitated a roast pig, 3D fondant cakes, mooncakes that looked like mahjong tiles, among others. However, she found out that there was a tumor in her large intestine during a health check in 2016. She removed the tumor immediately, and it was sent to laboratory test and the result showed that it was not a malignant tumor. Therefore, she did not need to undergo radiotherapy or chemotherapy then, but she needed to go to the hospital for regular follow-up visits. At that time, the medical expenses were fully paid by her husband’s company insurance.

Before that, Hui Ching weighed 100kg. After the tumor was removed, she followed the guidance from the doctor to start losing weight. She also went to fitness classes and controlled her diet. With much perseverance and determination, she successfully reduced her weight to slightly over 60kg, and she still maintain a healthy lifestyle. Since she fell ill for the first time, she became very health conscious and paid special attention to her physical condition. She will go for detailed health check and get her cancer index report every year, including the health check report in December last year which revealed that she was healthy.

Unexpectedly, she started to feel abdominal pain in September this year, and since October, the abdominal pain became severe. Her stomach started to swell and has a lump, so she went for another check. It turned out to be a recurrence of colorectal cancer.

She said that the report showed swelling of her uterus, liver and the edge of her spine, and white spots could be seen in her lungs. The doctor decided to perform a biopsy and the report was out on October 11, which confirmed that her colorectal cancer has recurred.

In the middle of the night on October 17, Hui Ching became ill. She had unbearable abdominal pain and she was weak. Her husband immediately sent her to the hospital, but the doctor told her that her condition was very critical and could not undergo a surgery to remove the tumor. The only way to extend her life was to undergo five radiotherapy sessions to shrink the tumor and undergo chemotherapy for six months (once every two weeks), and the medical expenses is amounted to RM150,000. As she wants to continue accompanying her children to grow up, Hui Ching has started her first of radiotherapy on October 18.

Suffering from illness and having to face the huge amount of medical expenses, Hui Ching felt hopeless and desperate, and she wanted to give up on treatment. However, her husband did not want to see his wife suffer, and did not want their children to lose their mother at young age, hence, he approached One Hope Charity for fundraising assistance.

Hui Ching was a pastry chef and might looked glamour in the eyes of the others. However, she had some difficulties that she did not share with others. Her business was badly affected by the movement control order which imposed since two years ago. In the past two years, Hui Ching has been relying on her husband’s pension to support her business and receive medical treatments. And now, she suffered from cancer and her whole family that used to be happy and worry-free, needs to worry about her medical fee.

Looking at Hui Ching’s current situation, her family has no source of income, and she is unable to afford the medical fee at all. Earlier, she thought of transferring to a government hospital, but the doctor explained that her condition should not be dragged any further. Only immediate radiotherapy allows her to continue survive. If she transfers to another hospital, she needs to go through all the examination procedures once again, and it may delay her treatment which will result in deterioration of her condition and her life may be in danger at any time.

Her 57-year-old husband Tan Eng Huat is a retired bank staff. He planned to obtain a real estate agent license initially after his retirement, but the plan was put on hold due to the movement control order. Hui Ching has a cake shop but she handed over the business to her partner after she fell ill, so that she can concentrate on her treatment. The couple has a pair of dizygotic twins of different genders and an 11-year-old daughter, and does not have any source of income. As they cannot afford the medical expenses, so they approached One Hope Charity for help.

After reviewing the case, One Hope Charity decided to help Hui Ching in raising the RM150,000 cancer therapy expenses. The family agreed to authorise One Hope Charity to take charge of the fundraising and collect donations from the well-wishers on their behalf.