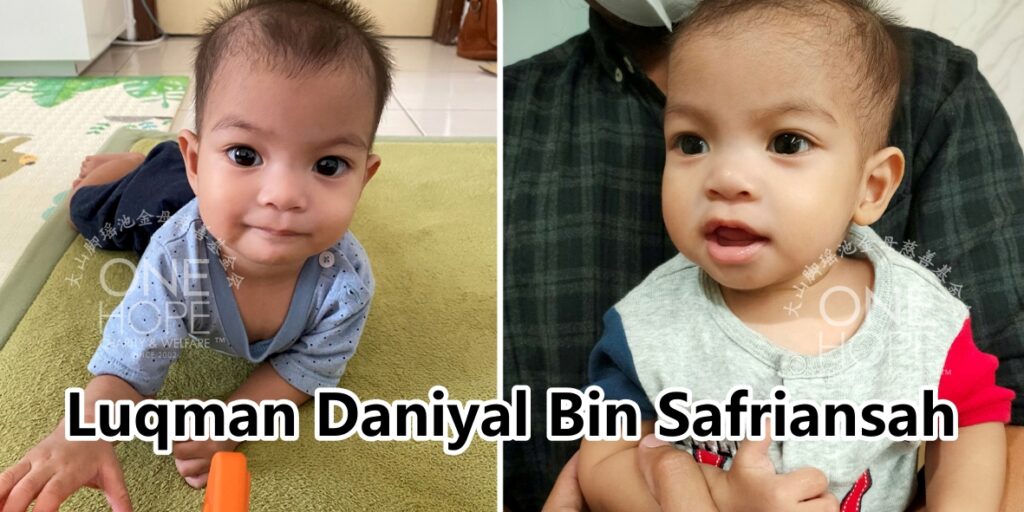 The 11-month-old baby boy weighs only 5.75kg. A thorough examination revealed that his heart condition has deteriorated and needs to undergo a surgery within the golden window. His parents plead the public to help them with RM65,000 so that their baby can continue to survive.

A young couple moved from Sabah and settled down in Penang. After completing their studies, they built a happy family. Unexpectedly, their youngest son was diagnosed with severe heart disease shortly after birth and needed a heart surgery. The young couple who had no relatives in Penang, hope that well-wishers can offer them some help.

Doctor heard a murmur in the heart of Luqman Daniyal Bin Safriansah, an 11-month-old Malay boy, shortly after he was born, but it was only mild then, so the doctor did not perform further examination.

Until when he was two weeks old, repeated examinations revealed that baby Luqman Daniyal had a hole in his heart. He was diagnosed with ventricular septal defect (VSD). At a young age, he had to take medicine to control his condition and have regular follow-up visits. At that time, the doctor also advised him to undergo a heart repair surgery when he reaches a specific weight.

However, baby Luqman Daniyal, who suffers from heart disease, has not been able to gain weight. He is now 11 months old, but is only 5.75kg, which is lighter than any babies of his same age (babies of his age weigh around 7kg to 8kg). Although doctor recommended him to take special milk formula for weight gain, but that didn’t help either.

At a recent follow-up visit, the doctor found out that his condition had deteriorated to the point where surgery was needed. The doctor does not recommend any further delay as the hole in his heart has been enlarged day by day. His heart may fail at any time, and it is life threatening to him.

Both his 33-year-old father Safriansah Bin Laud and 28-year-old mother Nor Aziah Binti Aziz are Sabahans. The moved to West Malaysia to study when they were young, and then settled down in Penang and formed a happy family. They soon had their first child. They were happy to welcome their eldest daughter three years ago. Unexpectedly, their youngest son was diagnosed with heart disease when he was born. The young Malay couple were overwhelmed by the huge amount of medical expenses.

The baby’s father, Safriansah, is an engineer with a monthly salary of RM5,000. His mother, Nor Aziah Binti Aziz, is a housewife. The family of four lives in South Seberang Prai in Penang. The couple are unable to afford their child’s surgical fee, hence, they approached One Hope Charity for help.

The mother, Nor Aziah, told One Hope Charity that apart from the fact that their child is smaller in size compared to the other children, there are no other obvious symptoms showing that their son’s condition had deteriorated as he is still active and lively. She said that her son’s condition made her worried, and the couple have no relatives in Penang, so they don’t know where to seek help. She added that asking help from One Hope Charity has become their only hope.

After a home visit, One Hope Charity decided to assist Luqman Daniyal Bin Safriansah in raising RM65,000 for his surgery. His family agreed to authorise One Hope Charity to take charge of the fundraising and collect donations from the well-wishers on their behalf.