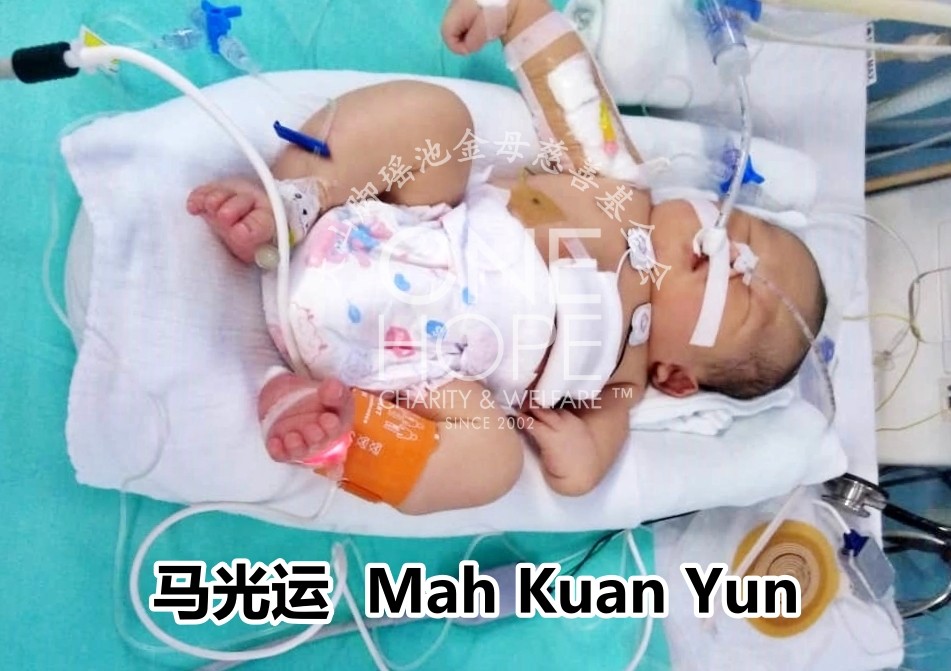 A Chinese newborn baby boy was born with VACTERL association. His vertebral, anorectal, heart, chest, ears and limbs were malformed at birth. However, the top priority for him is to undergo a live-saving heart surgery.

Baby boy Mah Kuan Yun from Padang Serai in Kedah was born in Kulim Hospital on  September 8. He suffers from imperforate anus, bent left hand, his lower limbs could not move, having abnormal heartbeats and other symptoms.

Due to the special condition, the doctor referred him to Penang Hospital for thorough examination. It was confirmed that he was born with VACTERL association with multiple anomalies.

【His blood oxygen dropped to critical level before, but when the parents rushed to the hospital, his condition returned to normal】

Baby Kuan Yun has two holes in his heart, and his blood vessels could not transfuse blood. He is diagnosed with interrupted aortic arch (IAA) type B, atrial septal defect (ASD) and ventricular septal defect (VSD). A heart surgery must be performed as soon as possible, otherwise his life might be in danger at any time.

Two days after his birth, the doctor first performed anoplasty so that his stool can pass. Kuan Yun has been put under observation and treatment in the intensive care unit (ICU) and he is now surviving on medical aid and medicines.

At present, the most urgent thing is for him to undergo heart repair surgery. His life will be saved after a successful heart surgery. After that, the doctor will continue with the repair and treatment for the other parts of his body.

His 32-year-old father Mah Cheng Huat was a worker at a food catering company before Covid-19. In August last year, he quitted and started a hawker stall selling noodles at a coffee shop, earning about RM1,500 a month.

His 29-year-old mother Tang Yuh Meei is a teacher at a childcare centre. Her monthly salary was RM1,350 but since the pandemic and movement restrictions, her salary has been reduced by 10% to 20%.

The couple has three children, aged 2, 1, and baby Kuan Yuan. The couple could not afford the surgical fee amounting to RM90,000, so they approached One Hope Charity for assistance.

After reviewing the case, One Hope Charity decided to assist. The family agreed to authorise One Hope Charity to take charge of the fundraising and collect donations from the well-wishers on their behalf.