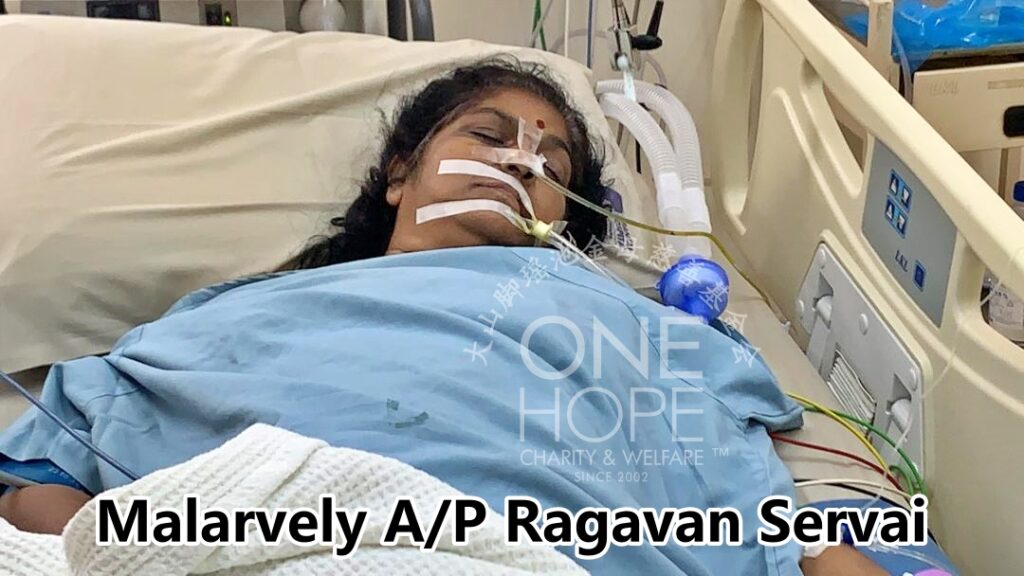 “I can’t live without her. She is my strongest support. As long as she survives, I am willing to take care of her.”

A doting husband looked at the photograph of his critically ill wife and tried very hard to hold his tears. His greatest hope is that his wife would be able to survive.

53-year-old woman, Malarvely A/P Ragavan Servai from Bukit Mertajam, was tested positive for Covid-19 a week ago. She was sent to the hospital for two days due to a sudden drop in the oxygen level. She was later allowed to be discharged and continued with home quarantine as she was no longer needed a breathing aid.

One day when she and her husband were chit chatting during her home quarantine, she suddenly could not speak, and her mouth drooped to one side. Her husband immediately contacted the officials from the Health Department for help. She was sent to the hospital and preliminary examination confirmed that she suffered from cerebrovascular obstruction, and she is urgently in need to be transferred to the specialist hospital for mechanical thrombectomy which cost RM50,000.

Her 51-year-old husband, Balandran A/L Michael is a factory operator. He was tested positive for Covid-19 after getting infected from his factory in early August. Three days later, his wife developed fever and cough, and was also tested positive for Covid-19. Their 21-year-old daughter was not spared; both the husband and daughter were taken to the low-risk quarantine centre at different times.

53-year-old Malarvely has hypertension, diabetes, and high cholesterol. She also suffered from breathing difficulties and sudden drop in oxygen level due to Covid-19, hence, she was sent to the hospital for treatment before being discharged for home quarantine after two days. When she returned home, her husband had completed his quarantine, but their daughter was still in the quarantine centre.

Few days ago, she was chit chatting with her husband as usual. Her husband suddenly discovered that his wife was unable to speak, and her mouth drooped to one side. Her right hand and foot could not move. The husband immediately called the Health Department, where they sent the medical personnel to check on her. They then rushed her to the Seberang Jaya Hospital and the doctor confirmed that she suffered from cerebrovascular obstruction. She needed to be transferred to the specialist hospital for emergency surgery.

Malarvely is a hawker who sells Indian kuih in front of her house. She earns about RM40 to RM50 a day after deducting the expenses.

Her husband Balandran is a factory operation with a monthly salary of RM1,568. He surrendered all his salary to his wife. The family only has what they need for a living, and they do not have any savings, or some extra money to seek medical treatment.

The couple has a 21-year-old daughter and she is pursuing a diploma in technology management at UTM Kuala Lumpur with a government loan. She will be undergoing her internship between August and December, and start working after that.

After receiving the case, One Hope Charity knew the urgency and approved the application for assistance immediately, so that the patient could be transferred to the specialist hospital for surgery. Currently, she had undergone the surgery and it went smoothly.

The family agrees to authorise One Hope Charity to conduct the fundraising and collect donations from well-wishers on their behalf.