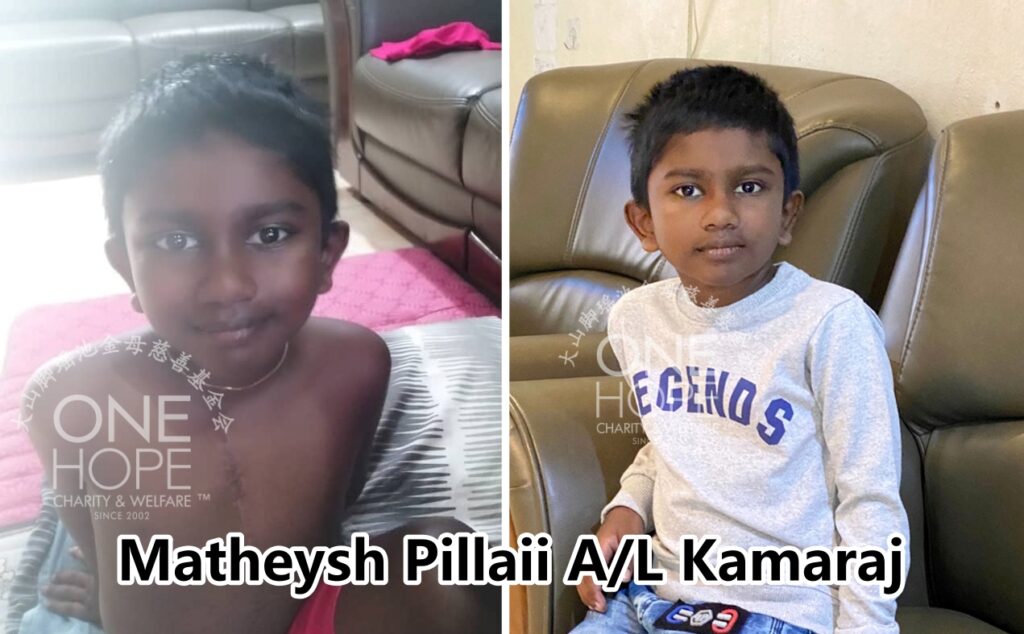 The five-year-old boy is active and lively. Others can’t tell from his appearance that he has congenital heart disease since birth. He had undergone two surgeries when he was still an infant, and now, he needs his third heart surgery in order to get rid of the heart disease and grow up healthily.

Five-year-old boy Matheysh Pillaii A/L Kamaraj from Sungai Petani, Kedah, was diagnosed with a congenital malformation of his heart, namely the Complex Univentricular Heart. He also suffers from cyanosis. At a very young age, he had undergone two heart repair surgeries  and he has successfully spent his five years safely.

During a routine follow-up visit in September this year, the doctor discovered that the boy’s heart vessel has narrowed and it is the suitable time for him to undergo the third surgery. The surgery has been scheduled in November.

One Hope Charity has successfully save the boy’s life in 2018. Due to the Covid-19 pandemic that hit the world since two years ago, the country had implemented several rounds of movement control order. The boy’s parents lost their job since about six months ago, and they are living in a difficult situation. They are unable to afford the huge amount of surgical fee needed by their son, hence, they approached One Hope Charity for help.

【Although he has undergone two heart surgeries, but the boy, who is at the growing stage, will have cyanosis in his hands, feet and face when he is too active】

The boy was born in 2016. He had an emergency surgery to save his life when he was less than one month old. In 2018, when he was two years old, he underwent a second surgery called the Glenn Shunt. Without the surgeries, the boy’s ventricle would not grow normal. The two surgeries went smooth and he survived.

He is currently living normally at home, but occasionally when he was too tired, he will experience cyanosis in his face and hands. As the boy grows up, during a routine follow-up visit on September 9 this year, the parents were told that the boy had a cardiovascular stenosis and he needed a third heart repair surgery.

The parents had finished up their savings when the boy underwent his first surgery. They even borrowed money from their relatives and friends to pay for the surgical fee. In 2018, One Hope Charity launched a fundraising of RM70,000 to support the boy’s second surgical fee. And now, the boy needs to undergo his third surgery that cost RM75,000.

Matheysh Pillaii is the only child in his family. His father Kamaraj A/L Jayakumar and mother Jenthi A/P Govindasamy, both 39, run a wedding planning and event decorating business. Their average income was about RM3,000 a month, but they have no income since the implementation of movement control order, and they have been relying on savings to support their cost of living.

After reviewing the case, One Hope Charity decided to help the boy in raising the shortfall of RM75,000 in surgical fee. His family agreed to authorise One Hope Charity to take charge of the fundraising and collect donations from the well-wishers on their behalf.