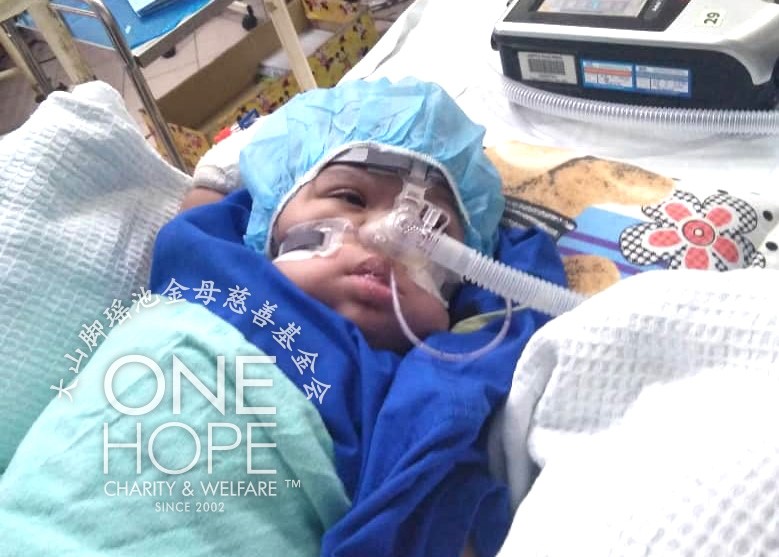 Imagine a child has to stay in a hospital for the rest of their life right after birth, relying on breathing aid to survive and having their mother to stay in the hospital by their side for a whole year... While it is a sad and depressing image to visualise, it is an unfortunate reality to a family.

Mohamad Iskandar Bin Mohamad Syaimi was borned with a serious congenital heart disease and although he is currently one-year-old, his body is covered with tubes and was unable to experience the joy of a normal child: to be able to walk or stand, nor able to laugh or cry. With his body full of tubes, his cries were voiceless. The least he could express his emotions was through minimal movements on his limbs as well as his tears, and her mother has been watching her child struggle for one whole year.

The parents have cried for help from the general public, as the couple have been mentally exhausted over the struggle for the past year. All they could ever hope for now is to have their child reunite with them in their own home.

【The child is now one year old, but because he still needs to rely on breathing aid, he can only make small movements with his limbs. If he doesn’t undergo surgery, the boy won’t live long】

Ever since Mohamad Iskandar was given birth, the doctor found out that he has a hole in his heart, as well as other problems in his lungs, ears and thyroid. He has always been dependent on breathing aid in the hospital ICU.

The doctors have informed earlier that the child needs to be at least five months old or weigh at least 8kg to be able to undergo heart surgery, but right now the boy weighs 13kg and urgently needs to perform the surgery.

According to the medical report, the boy not only suffered an atrioventricular septal defect (AVSD), but the pulmonary artery banding since he was 4 months old has been dislocated and needs to be restored once more.

Furthermore, he also suffered from other diseases such as gastroesophageal reflux and high pulmonary pressure, which could affect the heart surgery. This will be a very complicated heart surgery and requires a delicate post-surgery care. The estimated medical cost goes as high as RM90,000, but to a poor family, it is a huge figure and a heavy burden. They could not afford such expenses.

The father Mohd Syaimi bin Abdul Rahim, 46, is a factory operator, with a salary of RM1,360, while the mother Robiah binti Saad, 42, is a housewife. The couple have been taking care of 5 children, ages ranging between 1 and 13.

Robiah has been spending most of the time in the hospital watching the youngest child, while the father goes to work. The rest of their four children have been self-dependent, with the eldest one taking over their mother’s duty to watch over their siblings.