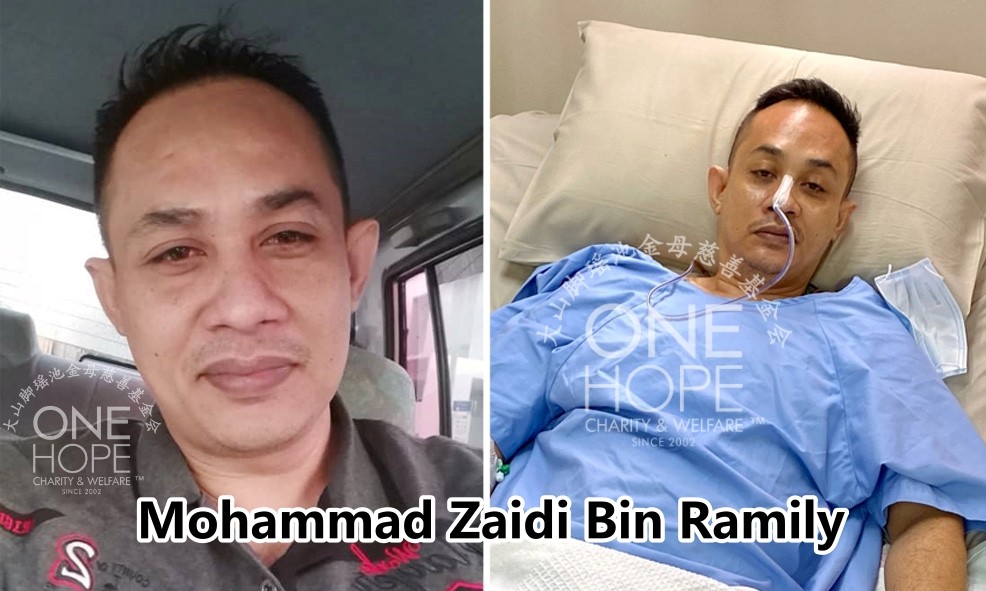 A burly 38-year-old private bodyguard suddenly collapsed. He was diagnosed with a stroke and needs to undergo an emergency surgery during the golden window, otherwise, he may be paralysed for the rest of his life. His wife eagerly begged the public to donate RM50,000 so that her husband can undergo a surgery to save his life.

38-year-old Mohammad Zaidi Bin Ramily suddenly felt dizzy and was unable to speak on October 21 (Thursday) morning. He fell into a chair and his left limbs were weak. Upon seeing that, his father-in-law, who is in his 70s quickly called his daughter home, as well as to call an ambulance to send him to the hospital.

After examination by the doctor, the man was diagnosed with a stroke. He needs to undergo mechanical thrombectomy within the golden window. Otherwise, his brain cells may be damaged which will seriously affect his other physiological functions, or even paralyse his whole body.

The surgery needs to be performed in the only specialist hospital in Northern Malaysia that owned the technology. However, the wife and children are helpless as they are unable to afford the surgical fee amounting to RM50,000. Hence, they approached One Hope Charity for help.

This is an urgent case. After the emergency approval given by One Hope Charity, the man was rushed to the surgery room to remove the blood clot in his brain within four hours of him suffering from a stroke. The surgery went smoothly; he is currently put under observation in the intensive care unit (ICU) and is temporarily out of danger.

【He is strong and young, but he suddenly suffered a stroke. If emergency treatment was not given, he may be paralysed for life, or even threaten his life】

Mohammad Zaidi is 180cm tall and weighs 94kg. Many years ago, he used to be one of the bodyguards for the Pahang Royal family. After that, he worked as a private bodyguard in Pahang. As his work was affected by the movement control order (MCO), he decided to become a part time bodyguard. In addition, due to his work location that was away from his family, Zaidi decided to resign and return to Penang to reunite with his wife and children.

Merely a day after he returned to Penang, Zaidi suddenly fell into a chair and discovered that his left hand and feet were weak. As he was tested positive for Covid-19 in early October (he was a first stage Covid-19 patient with no symptoms) and completed his quarantine on October 10, his wife was worried that it was the sequelae of the pandemic. However, he was told that he suffered a stroke after being sent to the hospital for examination.

In the eyes of his wife and children, Zaidi is a family man who cares a lot about his family and loves his children very much. He will spend his time with his children in his free time. Therefore, the wife was very helpless when she learned of her husband’s sudden stroke.

Zaidi just bought an insurance in March this year and the insurance company refused to insure as the policy was less than two years. Therefore, the patient’s family was worried as they had nowhere to ask for help, until they found One Hope Charity.

Zaidi’s 37-year-old wife, Karmabee bt Dasa is a civil servant with a monthly salary of RM2,485. After deducting monthly contributions from the salary, she takes home RM1,877 a month.

The couple has to support the living expenses of their five children, aged 12, 8, 7, 5, and 3. They have no extra savings, and cannot afford the medical expenses at all.

After reviewing the case, One Hope Charity decided to assist Zaidi in raising the surgical fee. The family also agreed to authorise One Hope Charity to take charge of the fundraising, and collect donations from well-wishers on their behalf.