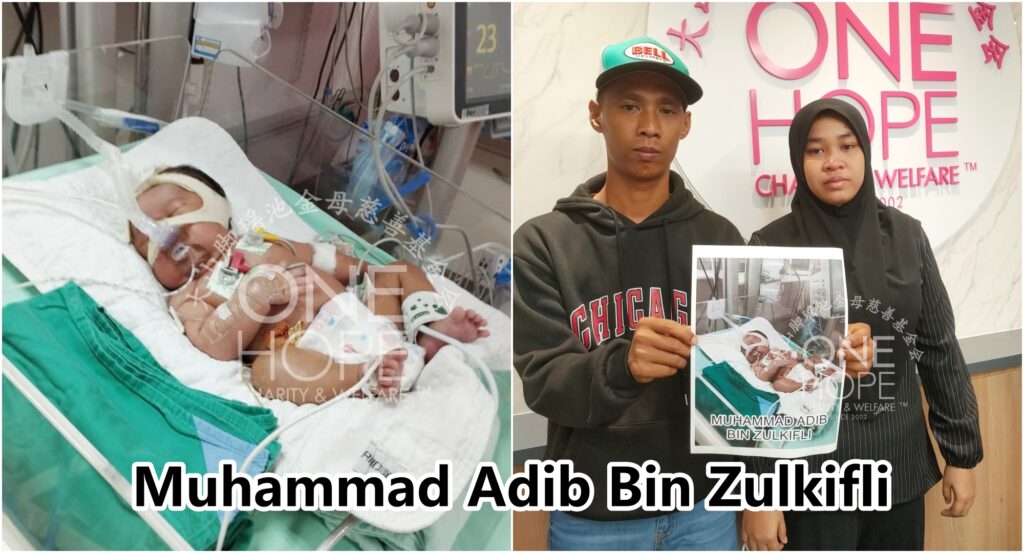 He has not been held by his parents since he was born. For nearly three months, he has been staying alone in the incubator, relying on breathing aids and medicines to relieve his heart disease. He is struggling to survive, and he hopes to have a chance to live.

Muhammad Adib Bin Zulkifli, a nearly three-month-old baby boy from Langkawi, Kedah, was diagnosed with congenital heart defect right after he was born. However, the baby boy could not take long-term medication to control his condition, so he needs to undergo a surgery. It is a race against time, and the parents can only cheer for their child through the incubator.

And now, the baby boy is able to undergo the surgery, but the shortfall of RM65,000 in surgical fee is beyond the means of the family, so they plead the public for assistance.

【The baby boy’s family is poor, the parents only own a motorcycle. The parents always relied on public transport, and now, they have to travel all the way to Penang to bring the child for medical treatment】

In an examination, the baby boy was found to have transposition of the great arteries (TGA), pulmonary atresia with ventricular septal defect (PA-VSD), atrial septal defect (ASD) and patent ductus arteriosus (PDA). He was supposed to be referred to Penang Hospital for a stent placement surgery, but it was not done due to his bronchial problems.

The baby boy needs to undergo a modified Blalock-Taussig shunt as he cannot rely on medications for too long. He needs to be referred to a private specialist hospital for the surgery, but the parents are worried about the huge surgical fee. Besides praying, they have no other way to help the child.

His 32-year-old father Zulkifli Bin Akib is a service crew at a hotel earning RM1,600 a month. His 28-year-old mother Aniesma Bt Mokhtar is a housewife. The couple have two other children – a six-year-old daughter and a three-year-old son. The father also needs to support the expenses of his mother and his 12-year-old younger brother, so he is unale to afford the medical expenses.

As the parents only own a motorcycle, they have to take a boat from Langkawi to Perlis and stay at their relative’s house for a night, before sending them to Penang the following day. On their return journey, they will have to call an e-hailing service to the train station, take a train back to Perlis for a night, before returning to Pulau Langkawi by boat the next day.

After reviewing the case, One Hope Charity decided to assist the boy in raising the RM65,000 in medical expenses. His family agreed to fully authorise One Hope Charity to take charge of the fundraising and collect the donations from the well-wishers on their behalf.