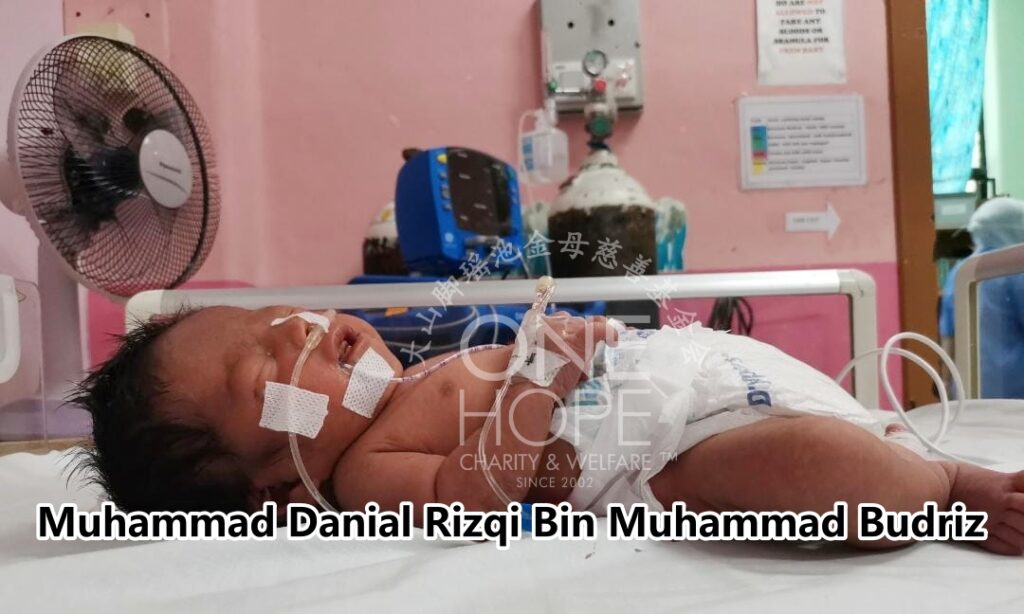 When he was still in his mother’s womb, he was found to have a heart problem. As he was the first child of his parents, they hoped for miracle to happen. However, there was no miracle when the baby boy was born, and he was diagnosed with a serious congenital heart disease.

Baby Muhammad Danial Rizqi Bin Muhammad Budriz from Penang Island was born on 6 March. He is now 15 days old but he is currently in the neonatal intensive care unit, relying on assistive devices to survive. The first-time parents cannot afford the huge amount of surgical fee, so they hope to receive help from generous individuals to save their son.

His mother Nur Amira Binti Adnan went for a detailed examination when she was 28 weeks pregnant. At that time, the doctor suspected that the fetus in the womb might have heart disease, but the doctor also comforted the mother immediately that the baby might be born fine.

The mother thought that her baby would be fine, and she also prayed that the child would be born healthy, but the baby boy was born three weeks before the expected due date.

After the baby was born, the doctor conducted a check on him and found that he had serious heart disease. He must stay in the neonatal intensive care unit and use a ventilator to help him breathe. He needs to stay in the hospital until he completed the surgery.

He paediatric heart specialist pointed out that his condition is serious, and a surgery needs to be arranged as soon as possible. If the surgery delays too long, his life will be in danger. He must undergo three surgeries, and the surgery now is to save his life. The next surgery will be at the age of three, and the other one will be done when he becomes an adult.

The baby boy suffers from ventricular septal defect (VSD) and atrial septal defect (ASD), and at the same time, his heart has only one blood vessel, which is a serious problem.

During the home visit, the mother Nur Amira told One Hope Charity’s team that although the doctor suspected that the fetus in her womb might have a heart disease, she remained optimistic and hoped for miracle. She thought that the baby might be born healthy, but the baby was diagnosed with heart disease. She and her husband were very upset as they are unable to afford their baby’s medical expenses.

His 26-year-old father Muhammad Budriz Bin Bahari is an operator in a factory, earning about RM1,700 a month. The 28-year-old mother works as a clerk in a government agency, with a basic salary of about RM1,300. The baby boy is their first child.

After reviewing the case, One Hope Charity decided to assist baby Muhammad Danial Rizqi Bin Muhammad Budriz in raising his medical expenses. His family agreed to fully authorise One Hope Charity to take charge of the fundraising and collect the donations from the well-wishers on their behalf.