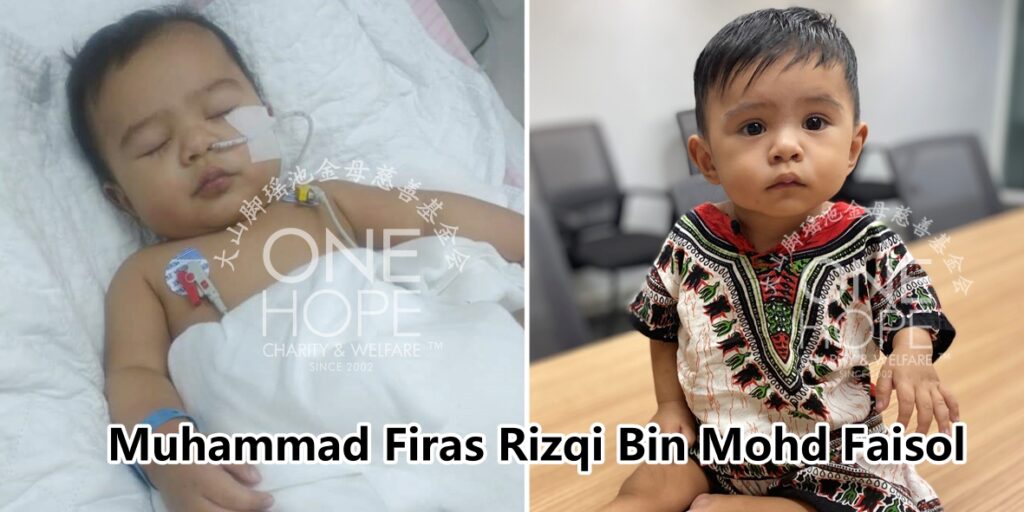 His hands and feet became cyanotic when he cried, and his blood oxygen once dropped to 40%. His condition was critical and was supposed to undergo a surgery when he reaches 10kg. However, his condition has deteriorated, and a surgery is urgently needed to continue his life. His parents beg the public to help their child with RM85,000 in surgical fee.

Muhammad Firas Rizqi Bin Mohd Faisol is a one-year-old boy from Sungai Petani, Kedah. His mother, Roslah Binti Hassan, was already a diabetic patient before she became pregnant. However, when she knew that she was pregnant, she was overjoyed and decided to give birth to the baby.

The 42-year-old mother knew that being advanced maternal age and a diabetic patient, she must be more careful. Therefore, she took special care during the whole pregnancy. During her obstetric examination, the baby was also normal.

She delivered to a baby boy on 30 December 2020. However, what caught them off guard was that the baby’s blood oxygen dropped sharply as soon as he was born, and the baby was sent directly to the neonatal intensive care unit (NICU). After examination, it was revealed that the baby had heart defect, and was then referred to Penang Hospital for a thorough examination.

After detailed examination by the doctor, the baby boy was diagnosed with serious congenital heart disease and the doctor had performed a surgery to implant a stent in his heart when he was six months old. The doctor also told the parents that it was a temporary solution as the baby boy must undergo a heart repair surgery when he reaches 10kg.

Muhammad Firas Rizqi is now over a year old, and not only is he not up to the target weight, but his heart condition has started to deteriorate.

The parents said that the child’s fingers, toes and lips would became cyanotic when he cried. He would also experience shortness in breath, which made his parents anxious. At the beginning, when he became cyanotic, the parents would stop their works immediately and quickly send the child to the nearest hospital.

According to the doctor’s report, Muhammad Firas Rizqi suffers from Tetralogy of Fallot (TOF) and the surgery should not be delayed any longer or wait until he reaches 10kg, as his condition has deteriorated. However, the surgery cost RM85,000, which is an amount that the parents cannot afford. Hence, they approached One Hope Charity for assistance.

His 41-year-old father, Mohd  Faisol Bin Mat Shah, is an odd job worker. His main job is to repair roofs and his wages are calculated on a daily basis. He brings home between RM1,200 and RM1,400 a month. His 42-year-old mother, Roslah Binti Hassan, is a housewife. They have three children.

Their eldest son is 16 years old, and their 11-year-old second son is a Down syndrome child. Although he also suffers from congenital heart disease but the condition is not serious. The hole in his heart has been closed. He had intestinal stenosis, and he had undergone a surgery funded by the government when he was small.

After reviewing the case, One Hope Charity decided to help baby Muhammad Firas Rizqi to raise his medical expenses. His family agreed to fully authorise One Hope Charity to take charge of the fundraising and collect the donations from the well-wishers on their behalf.