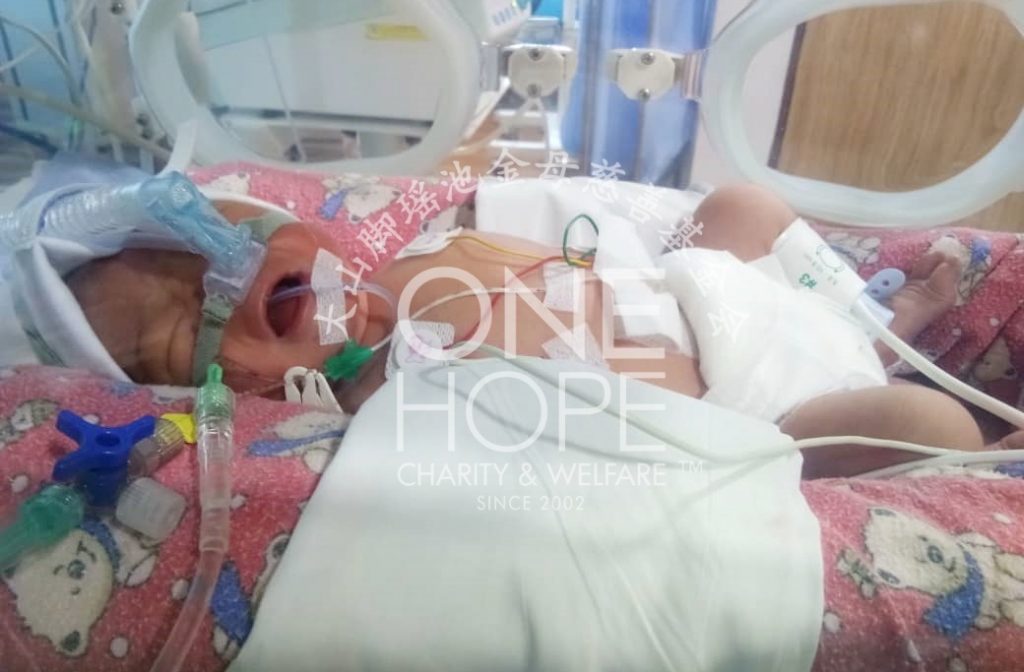 The baby boy’s lungs are not developed properly, leading to breathing issues and must stay in the incubator until his lungs are fully developed. Looking through the incubator containing a small baby coupled with tubes all over was a worrying sight for the family, but the huge medical expense left the parents even more distraught. The parents cried and begged for the public to help save their child.

Muhammad Hafiy Bin Ainol Hakim was born in Ipoh. When he was still in his mother’s womb, there was no problem or irregularities detected by the doctor. The baby boy was delivered smoothly on April 9.

When the doctor took the baby for examination, they found out that his oxygen content was extremely low and showed signs of breathing difficulties. The situation was urgent and critical, but due to the hospital not equipped with facilities for the baby, the doctors recommended the parents to admit the baby to the nearest specialist hospital to receive treatment.

Due to the urgency of the situation, the baby boy must receive immediate treatment. Leaving no other choice, the parents had to make the move in order to save their child.

【Diagnosed with lung hypoplasia, hole in his heart and cardiovascular stenosis】

Once reaching the hospital, the doctors immediately place the baby boy in an incubator. After further checks, the doctor diagnosed that not only the baby’s lungs were not fully developed, but also a hole in his heart. At the same time, the biggest issue is that the boy also suffers from cardiovascular stenosis.

According to the doctor’s preliminary judgement, Muhammad Hafiy must stay in the NICU ward for 2-3 weeks, with a fee of around RM110,000. During this period, doctors would provide medication to ensure that his lungs can properly develop. Furthermore, the doctor has also diagnosed the baby with D6PD deficiency.

Ever since the baby boy was transferred to the hospital, the father not only worried about their baby’s well being, but also the immense medical fee for treatment, so he approached One Hope Charity for help.

The father Ainol Hakim bin Honan, 35, works in the accounting department for the Ipoh Defense department, with a monthly income of RM2,500. The mother Zainorina binti Zainal, 32, is a housewife. Both are taking care of two sons, aged 5 and 3.

Ainol Hakim bin Honan said that his eldest son had a brain injury when he was three months old, allegedly due to the maid’s negligence. He had to undergo surgery but luckily there was no major problem after the treatment. Since that incident, he had asked his wife to quit her job and become a full-time mother.

After receiving the case, the Association decided to help Muhammad Hafiy in raising RM110,000. so that the baby boy could receive treatment during this period.