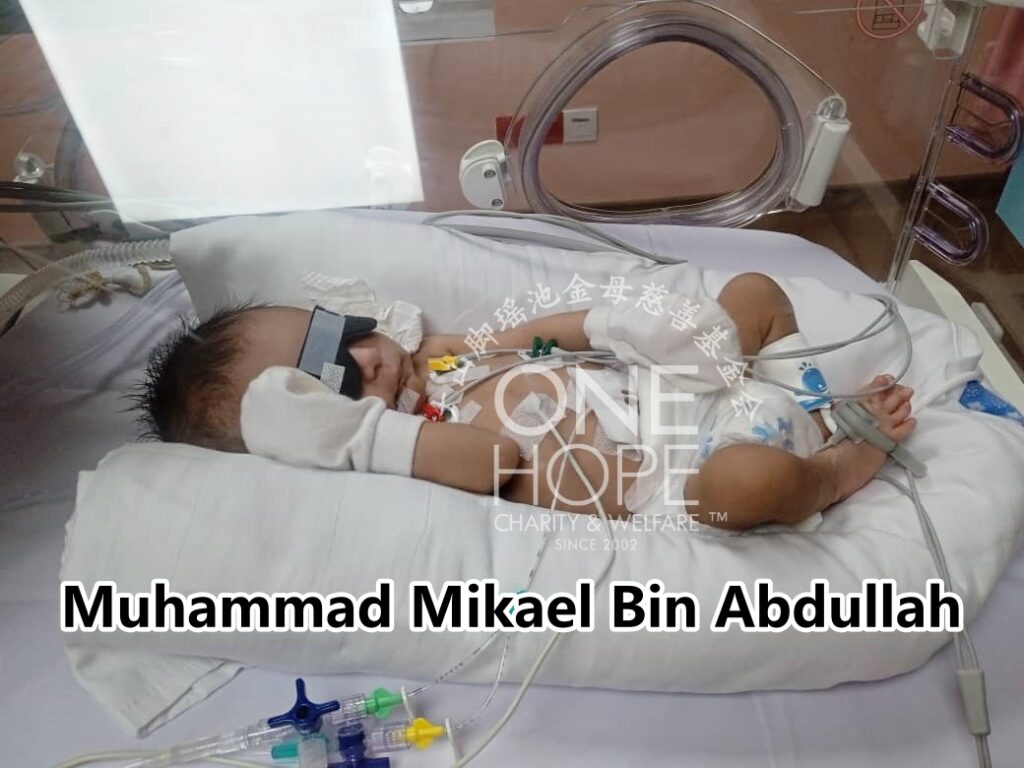 She was abandoned by her husband just after giving birth. The 32-year-old mother gave birth to a baby boy when she was seven months pregnant, but the baby boy had a bacterial infection in his lungs which required two weeks of treatment. The mother not only had to have face the pain of being abandoned by her husband but also to face the burden of her child’s health condition and medical expenses.

Premature baby boy Muhammad Mikael Bin Abdullah from Ipoh, Perak, was born when his mother was seven months pregnant. Although he was 2.1kg at birth, but his lungs were not fully developed. He also suffered from infection due to inhalation of meconium, which was life threatening to him. The baby boy needed a two-week treatment in an incubator in the intensive care unit, but his mother was unable to afford the remaining medical expenses of RM45,000.

【The mother experienced abdominal pain when she was seven months pregnant, she mistakenly thought she had gallstones and took her insurance card to the hospital for treatment of gallstones. Unexpectedly, it was a sign of labour, and she gave birth in an emergency at the hospital】

His 32-year-old mother Nurazani Binti Ahmadon married her husband in 2019 and she finally conceived a baby after three years of marriage. At the beginning of her pregnancy, the mother had difficulty urinating, and she was diagnosed with gallstones. The doctor prescribed her with some medications. At the end of February, she experienced lower abdominal pain, and as she did not have experience in labour, she thought that it was due to gallstones, so she took her company’s medical card to a specialist hospital for gallstones treatment. Unexpectedly, when she arrived at the emergency unit of the hospital on 25 February, the doctor confirmed that the abdominal pain was not caused by gallstones, but she was experiencing labour pain then.

Within 20 minutes of her arriving at the hospital, the mother gave birth to a baby boy at seven months. The baby was 2.1kg, and after examination, the doctor discovered that his lungs were not fully developed. At the same time, the baby also inhaled meconium which caused bacterial infection in his lungs. He needed to receive treatment for about two weeks.

If he does not receive treatment, his condition might also affect his brain development, or even threaten his life. The estimated medical fee required is RM50,000, but the mother can only afford RM5,000. She is unable to afford the remaining RM45,000.

His mother, Nurazani, is a salesperson at a supermarket, earning a basic salary of RM2,550 a month. She is staying at the hostel provided by the company. Her husband works in the same supermarket as her, with a salary of RM1,350. She thought that having a child would enhance the relationship with her husband, but she never expected that her husband gave her the cold shoulder, and eventually ignored her and the baby after she became pregnant, which made her heartbroken. And now, she only hopes that the baby can get out of danger, and she is ready to raise the child alone in the future, so she begs the public to help her in saving her baby.

After reviewing the case, One Hope Charity decided to assist the baby boy in raising the medical expenses. His family agreed to fully authorise One Hope Charity to take charge of the fundraising and collect the donations from the well-wishers on their behalf.