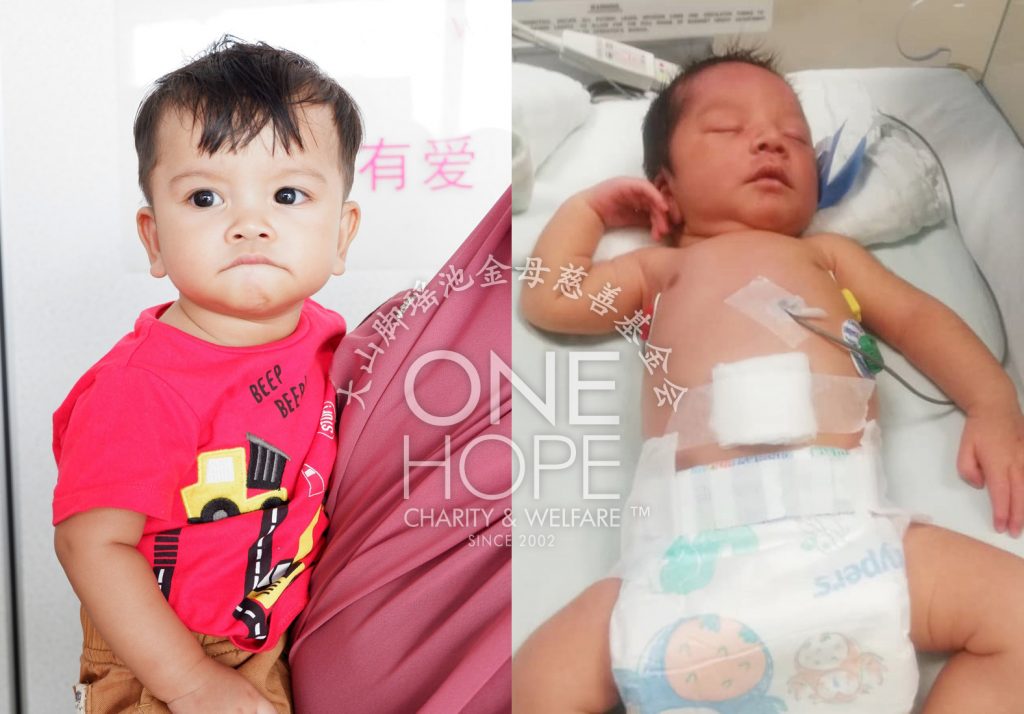 One Hope Charity & Welfare aims to raise RM65,000 for surgery fee to save an 11-month-old boy with severe heart disease. The surgery must be performed within a month due to his lung pressure gradually rising.

The 11 month-old boy was born with a serious heart disease which poses lethal threat for him. Due to his rising lung pressure, the baby has to undergo surgery within a month. The operation cost is RM65,000 and the family urged the Association to save their precious child.

It is a race against time and Muhamad Hadif Arsyad must undergo surgery as soon as possible. Otherwise, this could be the end of his life.

The father, Mohd Hafiz Arif bin Azihar, 31, worked in a restaurant runned by his mother-in-law. He used to earn a daily income of RM70, but was greatly impacted due to MCO 2.0. The mother, Nadiah Anati binti Zainol is a housewife, who has to take care of her 5-year-old son and her 11-month old baby.

Both of the parents were impacted by the COVID-19 pandemic, but with their youngest child’s condition worsening overtime, they left no choice but to plead for One Hope Charity & Welfare for financial aid.

When Nadiah Anati was pregnant, she had taken her birth check according to the time and everything seems to be normal for the child. Unexpectedly, the baby was born at the 34th week of pregnancy. The doctors noticed signs of cyanosis on the baby’s face after birth, and immediately sent to the intensive care unit (ICU), which later discovered that he had suffered several cardio-related illnesses.

According to the doctors, the baby has a complex univentricular heart of RV morphology, including Double outlet right ventricle (DORV), Mitral Atresia, LV hypoplasia, Transposition of the great arteries (TGA) and pulmonary stenosis (PS). The baby boy was permitted to be discharged after two weeks in the ICU.

Afterwards, the baby boy was admitted to Hospital Pulau Pinang for his regular checkups and has undergone catheterisation surgery last year to relieve his condition.

After a medical checkup on Jan 12, 2021, the doctor found that the baby boy’s lung pressure had risen and needed to undergo surgery as soon as possible. If the lung pressure has exceeded a certain index level, then it would be of no avail to perform surgery.

The parents of the 11-month-old have agreed to hand over the fundraising activities to One Hope Charity & Welfare, as well as to collect donations from the general public.