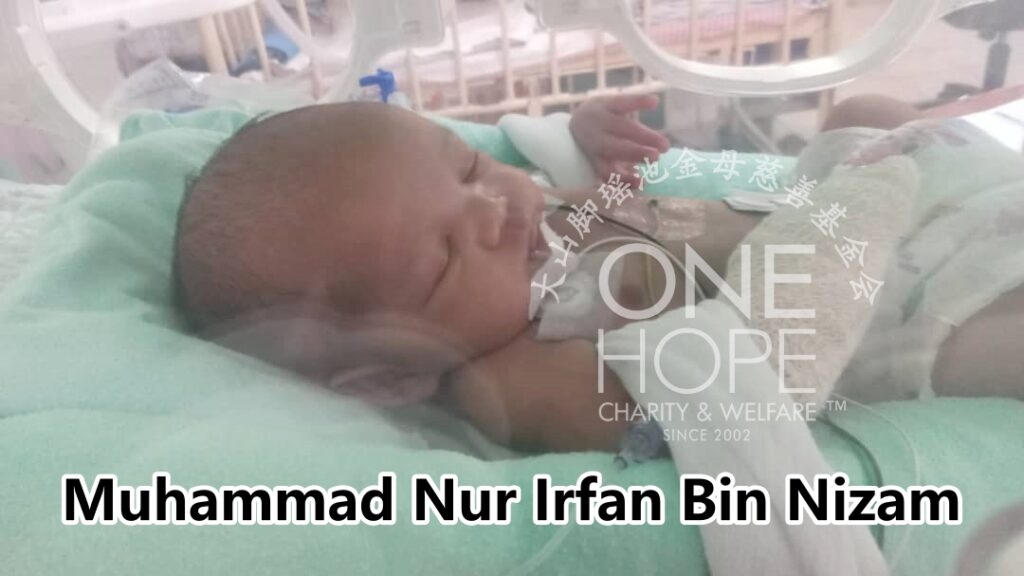 At six months pregnant, he was tested with fetal arrhythmia. As soon as he was born, the baby boy was rushed to the incubator in the intensive care unit. For the past month, he has been surviving on an assistive device. His parents plead the public to help their newborn, so that he can undergo a life-saving heart surgery during the golden window and return home healthily.

Baby Muhammad Nur Irfan Bin Nizam from Penang Island was found to have heart problem when his mother was six months pregnant. His mother gave birth to him on October 1 after 38 weeks of pregnancy. He was weighed 2.35kg at birth. However, due to his congenital heart disease, he was rushed to the newborn intensive care unit (NICU) right after he was born, and he has been relying on a ventilator to breath.

When he was one week old, the doctor initially wanted to implant a heart stent for him, but the surgery was not carried out as his blood vessels were too fine.

And now, the baby boy is still in the NICU, relying on a ventilator to breath. He also needs to be fed through tube. Only surgery can change his condition and let him get rid of the ventilator, as well as to discharge and return home.

The paediatric cardiologist said that Muhammad Nur Irfan Bin Nizam’s condition is complicated. His heart problems include dextrocardia, transposition of viscera, transposition of the great vessels, ventricular septal defect (VSD), patent ductus arteriosus (PDA), among others. Therefore, he needs to undergo at least three surgeries in order to grow up healthily like other children and get rid of the ventilator. And now, he is in urgent need to undergo his first surgery that cost RM50,000.

His 35-year-old father Nizam Bin Mustakin works as a technician in a shopping mall, earning RM2,500 a month. His 34-year-old mother Norshida Binti Md Salleh is a housewife. She used to sell some food near her house but she stopped the business since the implementation of the movement control order. She is now selling ice creams at their kampung house which they rent it for RM300 a month. They have three children – an 11-year-old son, a nine-year-old daughter and the one-month old Muhammad Nur Irfan.

st is strictly prohibited. Stern actions will be taken against the offenders.