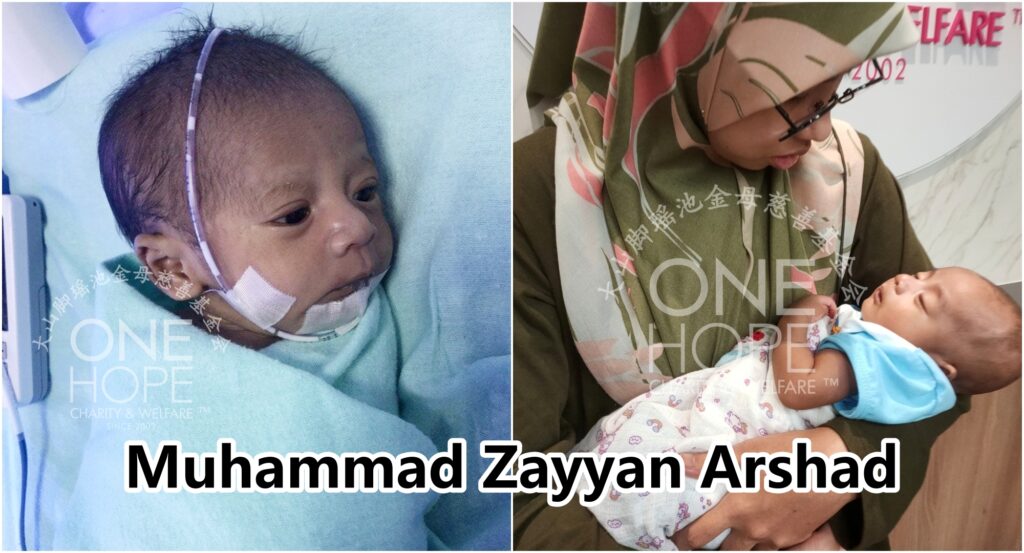 The baby boy always slept for long hours and would not cry. The parents thought that he was easy to be taken care of. Little did they know that lethargy was one of the signs of heart disease.

The two-month-old baby boy has a rare heart disease. He needs to undergo a surgery before the pulmonary pressure soars, otherwise, his life will be in danger. The baby boy is lethargic, short of breath, and has arrhythmia. Recent examination revealed that the baby boy has enlarged heart and pulmonary edema. The surgery is a race against time.

The doctor informed that the surgery cost about RM90,000. The parents, who are employees in the tourism industry can only afford RM7,000 and they are hoping that the public can help them with the remaining RM83,000.

Baby Muhammad Zayyan Arshad Bin Muhammad Zahren Haiqal from Langkawi in Kedah, was born on 2 June. His mother conceived one year after her marriage. After a full term pregnancy, the mother’s amniotic fluid broke, but he was not born after 18 hours. The doctor worried that the baby might drown and decided to conduct a caesarean section. The baby boy weighed 2.11kg at birth and was discharged three days after birth.

The baby returned home for a night, and he was brought to the Langkawi Hospital the next day for treatment due to jaundice. The doctor discovered that the baby experienced shortness of breath and immediately referred him to Penang Hospital for a detailed examination. He was diagnosed with Truncus Arteriosus, which is a rare congenital heart defect that not only has a hole in the heart but also has only a single trunk, which causes oxygen-poor blood and oxygen-rich blood are mixed together as blood flows to the lungs and the rest of the body, causing serious and bad blood circulation cycles.

Due to the serious condition, the baby boy was placed in the hospital for observation for a month, and he was discharged when he weighed 2.5kg. He has been relying on medication to control his condition, and the surgery date could not be confirmed, so the hospital referred him to a specialist hospital for surgery.

And now, the two-month-old baby is 3kg. He needs to undergo the surgery as soon as possible. If the lung pressure soars, even a surgery will not save his life. This is a race against time, otherwise the baby’s life will be in danger at any time.

His 29-year-old father Muhammad Zahren Haiqal Bin Mohd Nasir works as a maintenance technician in a hotel with a salary of RM2,080. His 28-year-old mother Nurizzati Bt Ramdzan is a sales coordinator in a hotel, earning RM1,510 a month. The baby is the couple’s only child. As the future follow-up visits and transportation fees are a burden to the family, so they can only afford RM7,000. They hope that the public can help them with the shortfall in surgical fee.

After reviewing the case, One Hope Charity decided to assist in raising the RM83,000 in surgical fee. His family agreed to fully authorise One Hope Charity to take charge of the fundraising and collect the donations from the public on their behalf.