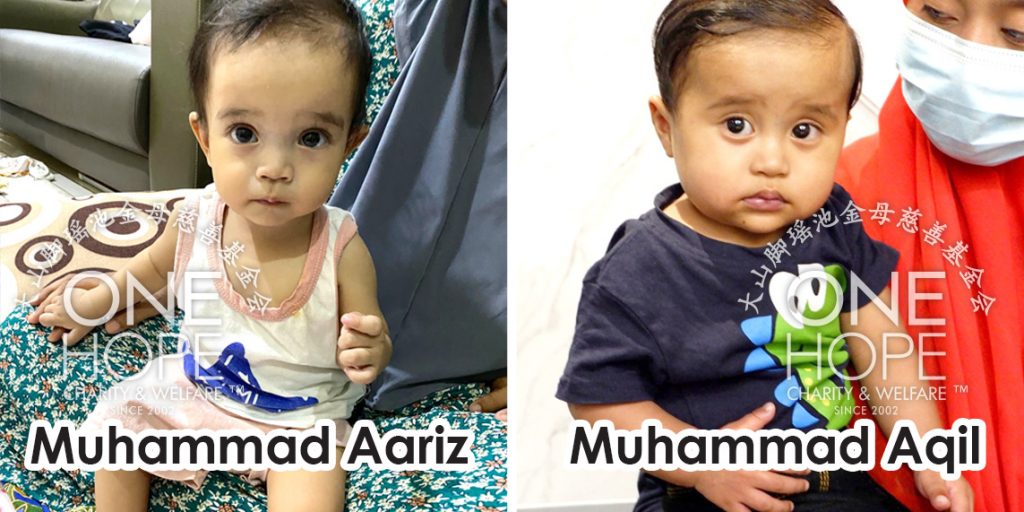 The two young boys may look adorable and healthy, but within their body lies a sick and broken heart, which would only grow weaker as the boys grow up if not treated. They need a total of RM140,000 to settle for their respective heart surgery in order to save their lives.

One month after the baby was born, the doctor diagnosed him with a serious heart disease. He had his first heart surgery when he was two months old and the boy, who is currently one year old, is going to get his next heart repair surgery. If not treated, he may lose his life.

Muhammad Aqil Bin Mohd Rashdan is born in Tasek Gelugor, Penang. Back when he was still in her mother’s womb, everything was normal up until the delivery period when the doctor noticed an irregular heart beat, hence the doctor performed an emergency C-section.

When Muhammad Aqil was one month old, the doctor notice that he has a complexing heart beat and was further diagnosed him with a congenital heart disease, specifically the missing of a right heart valve. Therefore, when he was two months old, the doctor performed his first surgery known as the BT Stunt, and the medical expenses were paid by the parents.

Afterwards, the parents had been taking him for regular checkup and recently found that his heart has other irregularities. After careful examination, the doctor noticed that the heart suffered from Tricuspid Atresia, Hypoplastic RV and ASD and must go through a heart surgery in three different phases. The first phase of surgery was already done when he was two months old. Now he must undergo the second phase, followed by the final phase when he is five years old.

Currently, the one-year-old now weighs 8 kg and the doctor said that he is ready to undergo the second heart surgery. The surgery would include the bidirectional Glenn shunt procedure, atrial septectomy and MBTS procedure. The medical fee for this complicated surgery cost RM70,000.

The father Mohd Rashdan bin Ibrahim Sahati, 33, works as a technician for a factory in Penang island, with a monthly income of RM1,865. The mother Nadzirah binti Ahmad, 29, is a housewife. They also have another four-year-old son.

Muhammad Aariz bin Ahmad Azriman is born in Seberang Perai Utara. His mother gave birth to him when she was 42 years old. Because of her old age, she has been extra careful during her pregnancy period.

After four months of pregnancy, the doctor diagnosed her with gestational diabetes. At the same time the bloodstream of the baby inside the mother womb may also have problems, but at this point in time, no treatment can be done.

Muhammad Aariz was born in Feb 11, but due to the baby’s heart disease, the doctors immediately sent him to ICU for treatment and examination for four days. The doctor allowed him to be discharged, but must take regular checkups. When he was five months old, the doctors began to prescribe medicines to control his condition.

When he was one year old, the boy felt tired and fatigued whenever he drank milk due to his heart disease. Hence we currently only weigh less than 6kg. Furthermore, all his 10 little fingers were also turned purplish. If he ever cries or gets too excited, his condition would worsen.

In a recent medical checkup, the doctor recommended that his condition must not develop any further as he is suffering from TOF, which could potentially take away his life. The fee for the heart surgery cost RM70,000.

One Hope Charity has reviewed both cases via home visits and agreed to launch a fundraising campaign to raise a total of RM140,000 for the two families.