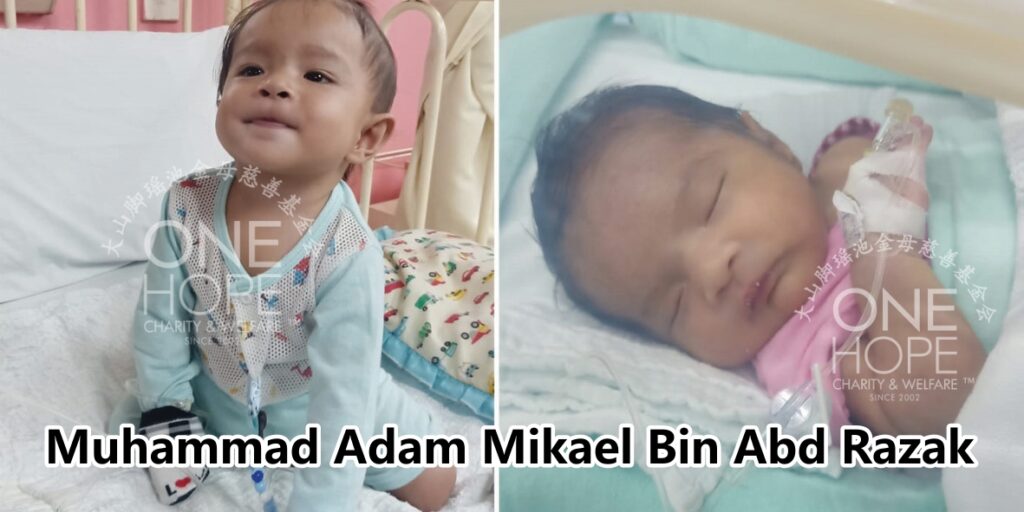 The one-year-old baby boy, Muhammad Adam Mikael Bin Abd Razak from Sungai Petani, Kedah, was diagnosed with Tetralogy of Fallot (TOF) following shortness of breath after birth. At that time, the doctor informed the parents that he could only undergo surgery when he reached 10kg or one year old.

Unexpectedly, it was discovered that there was a drop in his blood oxygen level during a recent follow-up visit. His oxygen level was just 60%, so he needed to be hospitalised and undergo urgent surgery to save his life. The doctor had to refer him to a specialist hospital for the surgery, but the surgical expenses of RM80,000 worried the parents.

【He couldn’t undergo surgery as he had not reached the minimum weight and age. However, he became cyanotic very often. His parents were worried, and they had sleepless nights as they were afraid that their son would die due to hypoxia】

The pregnancy examinations of Muhammad Adam Mikael’s mother showed that everything was normal. However, she was forced to have a caesarean section due to the delayed opening of the cervix. Baby Muhammad Adam Mikael was born on 24 September 2021, weighing 2.25kg.

The next day after his birth, the baby was referred to the general hospital for examination due to shortness of breath. He was diagnosed with Tetralogy of Fallot (TOF), namely pulmonary stenosis, ventricular septal defect (VSD), overriding aorta and right ventricular hypertrophy. The doctor also told the parents that the baby needed to wait until he was one year old, or 10kg, before being allowed surgery.

The sudden bad news shocked the parents, and they were at a loss. They followed the instructions from the doctor and brought the baby for regular follow-up visits. However, in the past year, the baby had breathing difficulty, hypoxia, and cyanosis of the lips and nails due to heart disease when he drinks milk or is active. The symptoms frequently frighten the parents.

Fortunately, the doctor also taught the parents to let the child lie flat and raise his feet to allow blood circulation when he is cyanotic. If his condition worsens, the parents will have to send him for emergency treatment so that he can receive an oxygen supply at the hospital.

Finally, Muhammad Adam Mikael is now one-year-old, but he only weighs 7.9kg. During a recent follow-up visit, the doctor told the parents that the blood oxygen level had dropped to 60%, so he was hospitalised for treatment. He relied on a breathing aid until his condition improved.

Over the past year, Muhammad Adam Mikael’s parents have tried their best to take good care of him. However, they were exhausted and worried when their son could not undergo surgery. They feared that their son would suffer from hypoxia due to their negligence.

Fortunately, the boy has now achieved the requirement to undergo surgery, but they are still short of RM80,000 in surgical expenses.

The boy’s 37-year-old father Abd Razak Bin Romli is a factory operator earning only RM1,500 a month. His 36-year-old mother Hasmilia Norida Binti Zahari works in a bookstore with a monthly salary of RM1,500. The boy is their only child.

After reviewing the case following a home visit, One Hope Charity decided to assist Muhammad Adam Mikael in raising the required medical expenses of RM80,000. The family agreed to fully authorise One Hope Charity to take charge of the fundraising and collect the donations on their behalf. For questions, call One Hope Charity’s hotline at 016-419 2192 or 019-232 2192