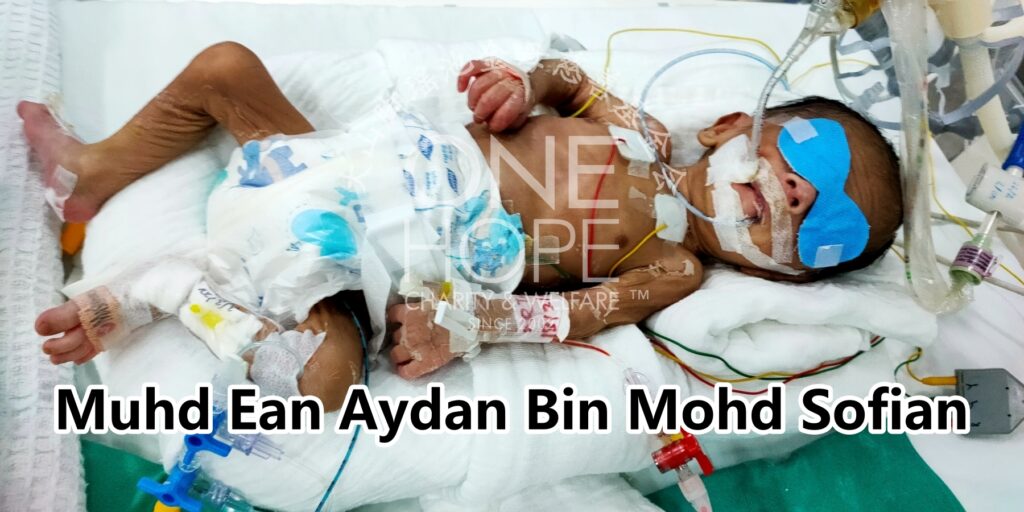 “He is our first child, please help him!”

A Malay couple from Bukit Mertajam, Penang, were looking forward to the arrival of their first child after marriage. Unexpectedly, the baby who arrived a month before the estimated due date is only 1.95kg, and he was diagnosed with serious heart disease. He is temporarily surviving on life support devices in the intensive care unit and urgently needs an emergency heart surgery that cost RM50,000 to survive.

Baby boy Muhd Ean Aydan Bin Mohd Sofian has been born for almost a month. Due to a heart defect, he is still unable to return home and use the baby’s bed that his parents prepared for him. The baby boy can only stay in the hospital and wait for the heart surgery, but his parents cannot afford the surgical fee, so they hope that generous individuals can help them and give them an opportunity to see their child grow up healthily.

His 26-year-old mother Sarina Binti Mohd Yusoff was rushed to the hospital on 10 February after her water broke. The doctor discovered that her blood pressure was low, and the doctor immediately performed an emergency caesarean section to ensure the safety of the baby.

The baby boy was only 1.95kg when he was born. Due to light weight and shortness of breath, the baby was sent to the neonatal intensive care unit immediately. Examination revealed that the baby had severe congenital heart disease and must rely on an oxygen machine to breathe, otherwise, his life may be in danger.

After diagnosis by a paediatric cardiologist, he was found to have coarctation of aorta and large patent ductus arteriosus (PDA), which required surgery to repair, and the surgical fee is amounting to RM50,000.

The mother said that after she married her husband, they looked forward to welcoming their first child after marriage. She never expected that her child would have serious heart problems, which made them very worried. As a mother, she always worried about her child’s condition even in confinement.

The mother has been helping her father to sell vegetables at roadside and night markets since she graduated from secondary school. Her income was unstable. The baby’s 27-year-old father Mohd Sofian Bin Md Husin is an employee of a contractor that contracted the City Council of Penang Island’s lamppost repairing jobs, earning RM1,400 a month. They cannot afford their son’s medical expenses, hence, they approached One Hope Charity for assistance.

After reviewing the case, One Hope Charity decided to help baby Muhd Ean Aydan Bin Mohd Sofian in raising the medical expenses he needed. His family agreed to fully authorise One Hope Charity to take charge of the fundraising and collect the donations from the well-wishers on their behalf.