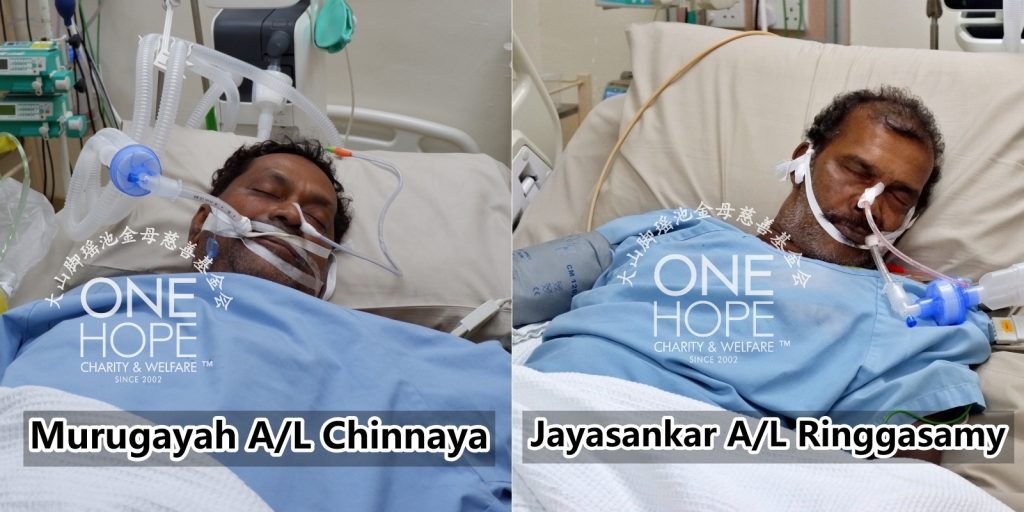 The 2 fathers had been through 2 heart surgery’s and 2 minor stroke. After recovered, they continue their role as the breadwinner of the family. During Father’s Day, both of them suddenly collapsed.

Both of them are 54 years old. Murugayah A/L Chinnaya is a cop. He requires RM60,000 for surgery.

The other patient is a hawker. Jayasankar A/L Ronggasamy requires RM40,000 surgery fees.

【Case 1: A dedicated policeman suddenly suffer from stroke. He needs to undergo 2 surgery to stay alive. The surgery cost RM60,000】

Murugayah, 54, is from Bukit Mertajam. He is from gambling and organised crime unit. In 5am on Father’s Day after he went to toilet, his wife found that he is unconscious on bed. She called ambulance and sent him to hospital. Doctor confirm that he suffers from stroke. After the hospitals in northern Malaysia do not have the equipment for surgery, he is required to transfer to specialist center for surgery to stay alive.

After background check, One Hope Charity had approved his case and allowing him to undergo surgery due to urgent condition. his MRI reports show that he required to undergo second surgery to reduce his brain’s pressure and clearing the blood clot.

Murugayah had been serving as a policeman for 34 years and he is a Sargent. He draws a monthly salary of RM4000z due to hypertension and diabetes, he had mild stroke for 2 times in last 3 years.

His wife Rajisvari A/P Vinayagam is a tamil school teacher. Their only son is 14 years old. They require to bear the expenses of the whole family including their parents.

Murugayah requires RM80,00p for surgery. His wife can only bear RM20,000. The remaining RM60,000 requires the help from public.

【Case 2: Been through 2 heart surgery and still dedicated to raise his family. He requires RM40,000 for surgery】

Jayasankar A/L Tinggasamy is a good father who raised his kids. He suddenly collapsed while riding his bike in 6.30pm on fathers day.

After he collapsed, his neighbour called ambulance and send him to hospital. After checkup, he was diagnosed with stroke and require mechanical thrombectomy surgery.

If he undergo the surgery on time, his chance of recovery is high. The RM50,000 surgery fee is unable to be paid by his family and hence, they came forward to seek help from One Hope Charity.

After we received the case, our team checked on his background and approved his case to allow him to undergo surgery on time. His condition is now stable.

According to his son, Yugengran A/L Jayasankar, his father was diagnosed with heart disease 10 years ago. He was then working as a lorry driver. His company paid for his surgery to implant a pace maker.

Last year, he was required to undergo ballooning surgery. His surgery were paid by his family. After his surgery, his family requested him not to work and he had resign from being a lorry driver. He then sell food in a hawker Center to earn his living.

Jayasankar and his wife, Meniama A/P Muniandy (54, Cleaner) has 3 children. His eldest son is 24 and working as a salesman. He earns RM2000 per month. Their second son is 23 years old and lost his job during MCO. He then found a new job and started work on Father’s Day. Their youngest son is 17 years old and still schooling.

The 2 families agree to allow One Hope Charity to take charge of the fundraising and collecting donations on behalf.