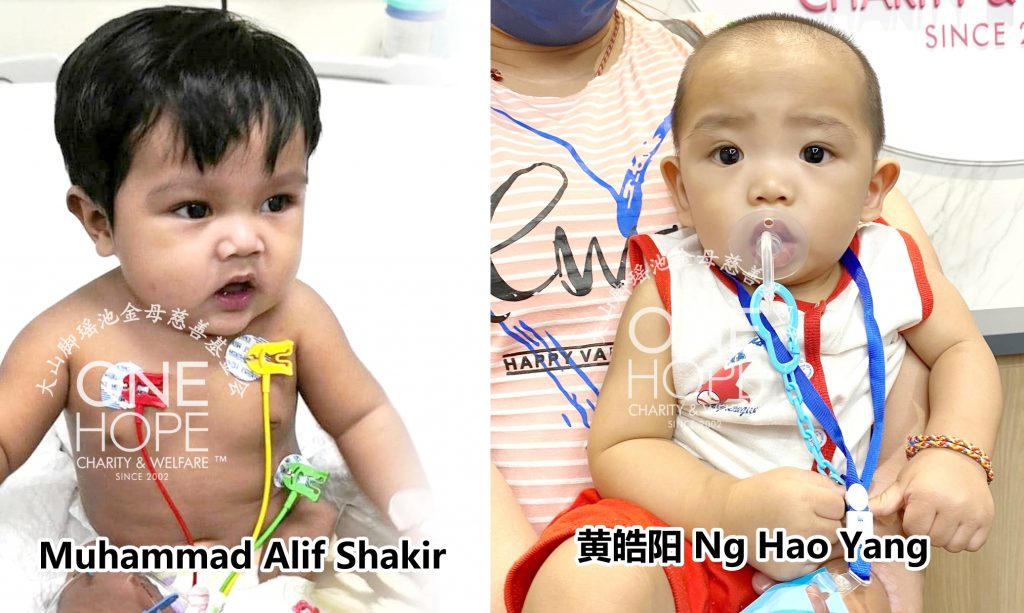 A cold revealed that a 11-month-old baby boy is suffering from heart disease. The baby has not only holes in his heart but also a malformed cardiovascular system. The medicines could no longer control his condition and the boy must undergo a surgery as soon as possible.

Eight-month-old cute little Muhammad Alif Shakir bin Muhammad Shafiq suffers from severe heart disease and his condition was once critical. He always suffered from hypoxia vomiting, so he needs to undergo surgery without any delay.

The two baby boys are not from well-to-do families and their respective parents could not afford the huge amount for surgical fee. Their parents begged the public to extend a helping hand to save their child.

【Case 1: A 11-month-old baby has not only holes in his heart but also a malformed cardiovascular system and needs to undergo a surgery as soon as possible】

11-month-old Ng Hao Yang from Kedah, who was born on August 20 last year, was the firstborn to his family. The delivery process went smoothly, and he was not detected with any heart problem then.

However, when little Hao Yang was four months old, the was down with a cold and did not recover after a long period of time. His parents brought him to a clinic and the doctor found out that his heartbeats were different from the others. Therefore, the doctor referred him to government hospital for further examination.

After getting through detailed examinations at the hospital, it was confirmed that he has holes on both sides of his heart, but at that time, no surgery was needed, and doctor had prescribed some medications for him to control his condition. He also required regular follow-up visits to monitor his health condition.

However, his condition worsened recently, and doctor suggested that he must go for a surgery to treat his congenital heart disease. Little Hao Yang is diagnosed with ventricular septal defect (VSD), atrial septal defect (ASD), aortic stenosis and pulmonic stenosis, and the surgical fee is RM80,000.

His 40-year-old father Ng Beng Han is a flooring installer earning about RM80 a day, but he is not being able to work for months due to the movement control order. His mother Ang Aun Chee, 32, is a clerk with a monthly salary of RM1,900.

【Case 2: An eight-month-old baby boy looks cute with his two round eyes. However, it is unknown to many he is facing a life-threatening heart crisis and his life was once in danger due to heart disease】

Muhammad Alif Shakir from Penang is only eight months old, but he had undergone two heart surgeries. However, the surgeries were just temporary measures, and his condition worsens recently and needed another surgery to save his life.

The news left his parents in shock. Besides having to face the impact of the pandemic, and now, there are more thing for them to worry now – their child’s medical condition and his huge medical expenses.

When his mother was pregnant at 38 weeks, the doctor found out that the oxygen level of the baby had dropped sharply. She had to undergo an emergency cesarean on October 17, 2020. The infant cried at birth, but he suddenly stopped breathing after around half an hour. His whole body turned blue due to hypoxia and the doctor managed to rescue him after some emergency procedures.

After thorough check, it was confirmed that the baby boy’s is suffering from dextrocardia, where his heart points towards the right side of his chest, and he has only one blood vessel. The doctor had to place a heart stent to relieve his condition when he was one month old, and since then, he has to attend regular follow-up visits.

In early July this year, he undergone the cardiovascular dilation surgery, but that was just a temporary solution. The baby boy needs a surgery to repair his heart and the surgical fee is RM75,000.

His 30-year-old father Muhammad Shafiq Bin Md Nasir works as a technician at a hotel, earning RM1,500 a month. His mother Maizurah Binti Mohamad Nasir, who is also 30, is a housewife. The couple also has another two-year-old daughter.

The families agrees to allow One Hope Charity to take charge of the fundraising and at the same time, accumulating the donations from the public. For enquiries, please contact our careline at 016-4192192 or 019-2322192.