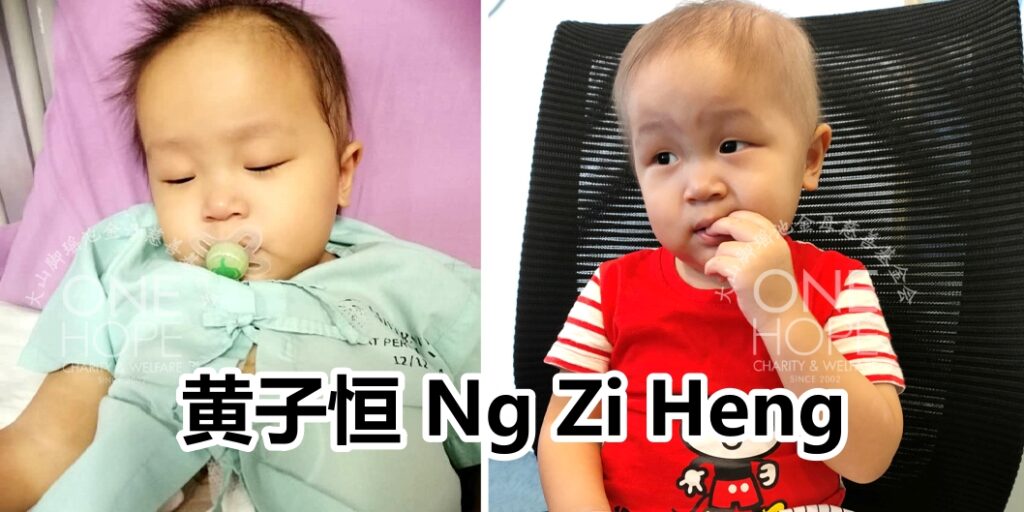 Two-year-old boy Ng Zi Heng, who was given a second chance to survive two years ago, has a relapsed leukaemia and urgently needs public donations of RM130,000 in medical expenses to continue his life.

Zi Heng, who was born in June 2019, had a lump in his abdomen when he was seven weeks old. His parents brought him to the hospital for examination and he was diagnosed with infant acute leukaemia and a gene mutation factor was entrained. At that time, there was no such medical technology in Malaysia for his treatment. Hence, his parents approached One Hope Charity to raise funds for their son’s treatment and successfully collected RM650,000. The boy then received allogeneic hematopoietic stem cell transplantation in Taiwan. The surgery then was successful, and after being closely observed in Taiwan for a period of time, he was allowed to return to Malaysia in good health in 2020. To prevent the recurrence of cancer cells, the boy has his routine follow-up visits and examinations at the government hospital in Malaysia.

Zi Heng’s 38-year-old father Ng Yen Lim, who approached One Hope Charity once again to seek help, said that after returning to Malaysia, Zi Heng’s routine examination report revealed that he was in good health. Unfortunately, the family was tested positive for Covid-19 in July last year. They were put under quarantine in their hometown in Malacca and Zi Heng was temporarily unable to return to Kuala Lumpur for his follow-up visit.

He said that it was until October last year when Zi Heng returned to the government hospital in  Kuala Lumpur for his follow-up visit, the family received the unexpected news – in Zi Heng’s blood test report, the doctor discovered that the cancer cells had recurred, and he must receive treatment again.

He pointed out that Zi Heng started to receive treatment in a government hospital in October last year. In December, his body rejected the chemotherapy. In order to save his life, he needed to use Blinatumomab to resist the cancer cells in Zi Heng’s body. However, the treatment fee costs RM130,000, and the amount worried the family.

【The child’s life will end if they give up on the treatment; if the treatment is given, there is still hope for the child to continue his life】

Once the treatment course starts, Zi Heng must stay in the hospital for 28 days. The entire course must be continued for four consecutive weeks by using a machine to slowly injects the drug into Zi Heng’s body.

Zi Heng is still young, and the treatment gives him a hope of surviving. His family begs the public to help Zi Heng again, so that he can receive the new treatment course while waiting for a bone marrow transplant.

The total cost for little Zi Heng’s Blinatumomab treatment amounting to RM130,000, of which RM60,000 is for the drugs, RM60,000 for bone marrow transplant and RM10,000 for hospitalisation. Zi Heng’s father is an insurance agent with a monthly salary of RM1,500 to RM2,000, and the commission is unstable. His 37-year-old mother Lim Fong Jing does not have a job. After reviewing the case, and the doctor also informed that the treatment plan gives a good chance for little Zi Heng to survive, hence, One Hope Charity decided to launch another fundraising to help Zi Heng’s family, so that the little boy can undergo the new treatment course as soon as possible.