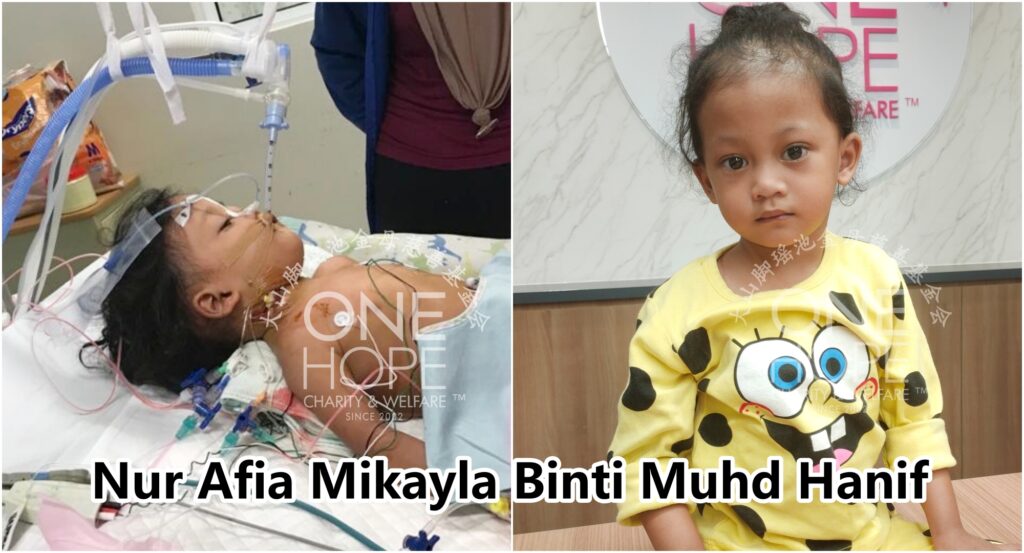 Three-year-old girl Nur Afia Mikayla from Penaga in Penang, has undergone two heart repair surgeries to relieve her heart condition. However, her condition started to deteriorate since two months ago, she not only showed cyanosis of lips and nails, but also asthma and shortness of breath. The risk of surgery had increased by 30%, but if she does not undergo the surgery, her life will be in danger at any time. Her parents are in dilemma but they hope to gather the strength from the public to save their child.

One Hope Charity launched a fundraising to raise RM90,000 so that the girl can undergo her third heart repair surgery in December last year. Unexpectedly, the girl went into a series of health problems. She had to rest for three months after tested positive for Covid-19, and after that, she was unable to undergo the surgery due to frequent fever and cold, so the surgery was postponed for many times.

Two months ago, the girl started to have asthma and cyanosis of her nails and lips. The doctor said that her condition had deteriorated. The risk of surgery had increased by 30%, and the surgical fee also hiked to RM120,000. The parents are worried, and they have no choice but to seek help from One Hope Charity for the second time to raise the shortfall of RM30,000.

【The girl’s condition deteriorates and she needs an emergency surgery. Any delay in surgery will threaten her life】

The girl was born full-term at Seberang Jaya Hospital in 2019. She was found to have a sudden drop in oxygen level in her body three hours after she was born. She was rushed to the intensive care unit and examination revealed that she suffered from cardiovascular stenosis and blood vessels reversal. She had undergone two stent placement surgeries at the hospital and was put under observation for two months before she was allowed to be discharged.

In 2020 at the age of one, she went back for follow-up treatment and the doctor found that her situation was not optimistic. She was referred to a specialist hospital for further examination and she was diagnosed with mesocardiac, congenitally corrected transposition of the great arteries (cTGA) and pulmonary atresia with ventricular septal defect (PA-VSD). She had a surgery in November 2020 to relieve her condition.

Recently, her condition deteriorated again, and the doctor informed that she needs another heart repair surgery, but she is still lack of RM30,000 in medical expenses.

The girl’s 24-year-old father Muhd Hanif bin Montar is a deliveryman with a salary of not more than RM2,000. Her 21-year-old mother Aizatul Melissa bt Abdullah is a housewife.