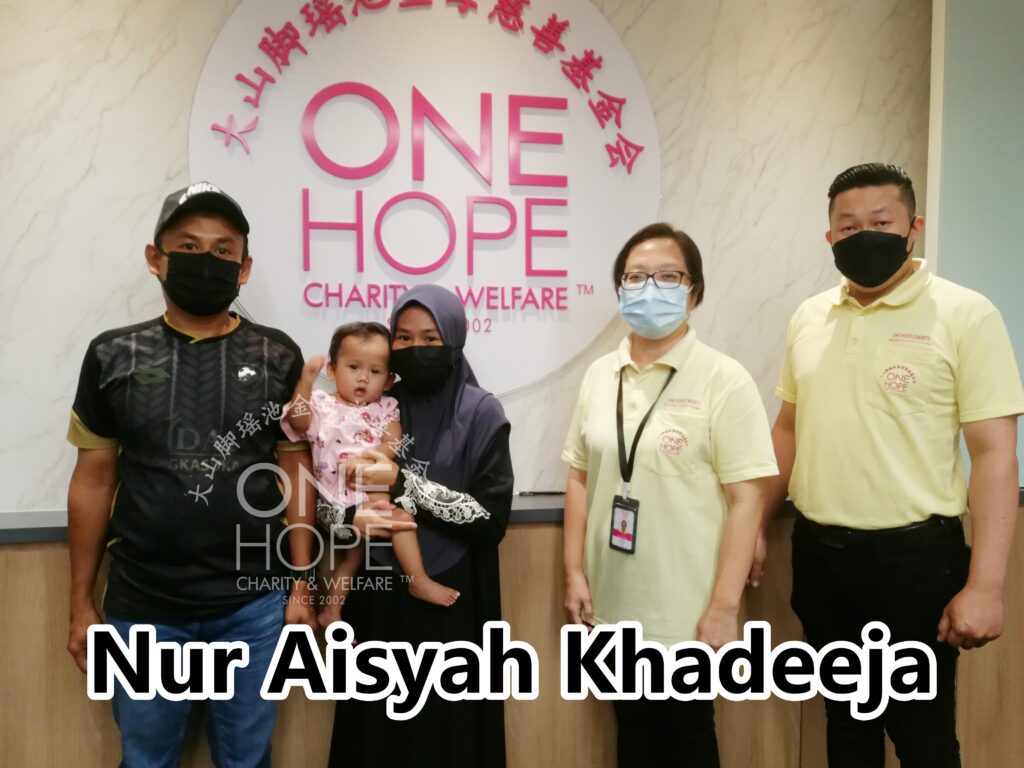 The toddler does not seems to be a baby with univentricular heart from her appearance but the rare heart disease will cause her to suffer from hypoxia at any time. She had already undergone a surgery when she was one month old, and now, she needs another surgery. The one-year-old girl urgently needs RM70,000 to undergo her second lifesaving surgery.

One-year-old girl Nur Aisyah Khadeeja Bt Mohd Syaarani from Sungai Petani in Kedah, has a challenging life. The day after she was born, she was rushed to the intensive care unit due to vomiting and a drop in blood oxygen. Examination revealed that the baby had a rare congenital heart disease. She is a child with univentricular heart and she also suffered from tricuspid atresia. She needs to undergo three heart repair surgeries.

The baby stayed in the intensive care unit for more than a month, and when she weighed 2.5kg at the age of one month old, she was referred to Penang Hospital for a surgery to place a stent in her heart to temporarily relive her condition. After the surgery, she could finally stop relying on a breathing aid, and she was discharged from the hospital. After that, she went for regular follow-up visits at the hospital.

However, the first surgery was only to relive her situation. Her lips will still turn purple due to lack of oxygen in her body when she is too cold or moves excessively.

As the girl grows up, the oxygen supplied to her body becomes insufficient. The doctor informed that she needs to undergo a second surgery of bilateral Glenn Shunt at the age of one, or before 18 months old. The surgery will connects the superior vena cava to the pulmonary artery so that the blood from the upper part of the body flows directly into the pulmonary artery to take blood directly to the lungs. At the same time, the PDA stent will be removed. She will be referred to a specialist hospital for the surgery. The surgery that cost RM70,000 worried her parents.

After an examination by the specialist, the doctor informed that the surgery must be performed within two months to save the little girl’s life. Otherwise, the decrease in oxygen level in her body would be life threatening. The girl needs a total of three surgeries, and this is her second surgery. The third surgery will need to be carried out between the age of four and six years old.

Her mother admitted that the days when her daughter was in the hospital were torturous and disheartening. Fortunately, she met a group of mothers whose child were also ill. They encouraged and cheered each other up, which made her feel relieved and became stronger in facing the condition and treatment of her daughter.

The girl’s 41-tear-old father Mohammad Syaarani Bin Abdul Rashid is a technician with a basic salary of RM1,355. Her 45-year-old mother Mastura Bt Idris was a tailor before marriage, earning about RM500 a month. She became a housewife after marriage. The couple have two more daughters, aged eight and six.

After reviewing the case following a home visit, One Hope Charity decided to assist Nur Aisyah Khadeeja in raising the shortfall of RM70,000 for her surgery fee.