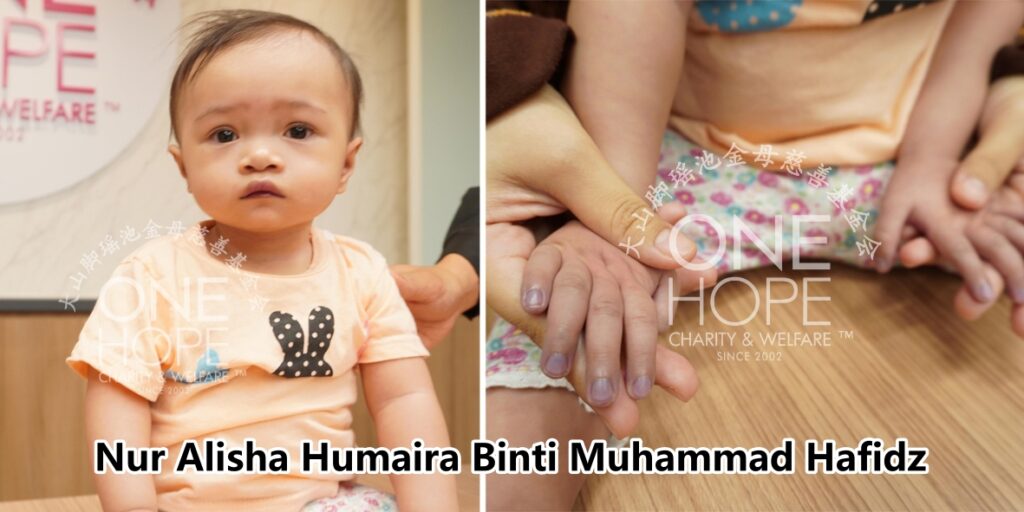 As an ambulance driver, the father works very hard every day to save lives. And now, his one-year-old daughter needs donations from the public due to serious heart disease, and he is begging the public to save his daughter.

Nur Alisha Humaira Binti Muhammad Hafidz from Kedah was diagnosed with congenital heart disease, namely Tetralogy of Fallot (TOF) and pulmonary stenosis (PS) when she was born. She needs to undergo a surgery when she weigh between 7 and 9kg. While waiting for her weight to increase, the parents can only comfort the child, who will turn bluish when she drinks milk or cries excessively, to prevent her from suffocation.

In the past year, the child has been attending her follow-up visits at hospitals in Penang and Kedah. Her body weight now is suitable for the surgery and she has been referred to a specialist hospital for the surgery. However, the huge amount of surgical fee is not something her parents can afford.

Her father is an ambulance driver who often rushes patients to the hospital for emergency treatments. However, his daughter needs a surgery now to save her life and they have no other choice but to ask for help from the public.

【The baby seems to be normal in appearance but there is a time bomb hidden in her body. She needs a heart surgery to save life】

Nur Alisha Humaira was born in Langkawi Hospital. One week later, her whole body turned bluish and she was referred to Penang Hospital for further examination, which later confirmed that she was suffering from Tetralogy of Fallot (TOF), which is a hole in her heart and narrowing of the pulmonary valve, but her condition then was not serious. The parents only had to bring her for regular follow-up visits and monitor her body condition.

In the past year, the parents brought their baby girl to hospitals in Penang and Kedah for her follow-up visits. The doctor told them that when the baby is one year old and weighed between 7 and 9kg, she can undergo the heart surgery. However, in the past year, the baby cried almost every day before she went to bed; and when she drank milk, she suffered from lack of oxygen due to breathing difficulties. Her lips and nails would turn bluish and what the parents could do was to comfort her.

In early October this year, the doctor told them that the hole in her heart is about 6mm in size and cannot be closed by itself. She needs a heart repair surgery which cost RM80,000.

The baby’s 29-year-old father Muhammad Hafidz Bin Ghazali is an ambulance driver at a specialist hospital in Sungai Petani, Kedah, earning RM1,250 a month. His 29-year-old wife Nur Ainina Binti Mahtar was a kindergarten teacher but became a housewife after marriage. Besides having the 1-year-old daughter, the couple has a son, who was born in June this year, and the mother went back to her hometown in Langkawi for confinement.

The father, who is living in Sungai Petani has to travel between Langkawi, Sungai Petani and Penang. He was burdened with the travel expenses and was unable to bear for the surgical fee. He hopes that the public can help her baby girl.

After reviewing the case, One Hope Charity decided to help the girl. Her family also agreed to authorise One Hope Charity to take charge of the fundraising and collect donations from the well-wishers on their behalf.