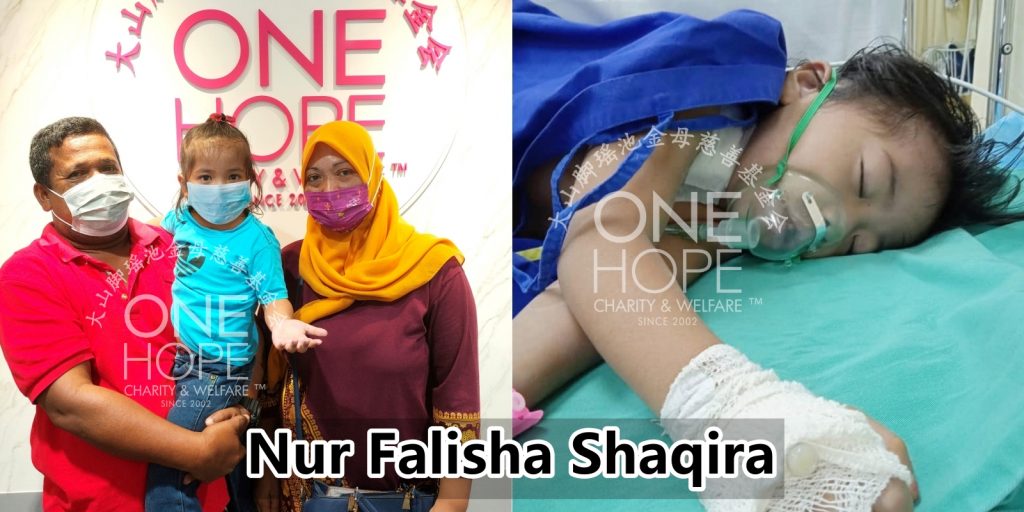 From the surface, she is just a young lively girl, but what’s extraordinary is that her heart is on the right side of her body.

Nur Falisha Shaqira binti Mohd Sukri is four years old. At a young age, she already underwent two heart repair surgeries. Occasionally, her fingers showed signs of cyanosis and her lips discoloured. In an emergency, her mother needs to massage her child’s legs to help her blood circulation.

As she grew older, her small heart and blood vessels could not bear the load much longer due to her rare condition, and needed a third operation to repair the defect. Nur Falisha Shaqira needs RM80,000 for her surgery, and we hope that you can give this girl another chance at living.

Nur Falisha Shaqira was born in Kulim hospital. The doctor said that the newborn has a rare problem in her heart and that her heart is on the right side of her body. She was transferred to the Penang hospital for further treatment. Two weeks after birth, she had a heart stent inside her, followed by a second heart surgery in 2018, when she was only one year old.

Her following clinical visits were done in the general hospital, yet her appointment has been delayed over and over again as they could not afford to seek medical treatment in a specialist hospital. But whenever the girl has asthma or hypoxia, the mother needs to lie her daughter’s body down and raise both her legs up so that her blood can circulate smoothly.

Now, the girl must undergo her third surgery, otherwise she won’t live long. For the past four years, her parents have been taking great care of her. Despite the hardships, they believe it was a test from God and continue to fight for her life.

The father Mohd Sukri bin Mat Jusoh, 43, is a part-time worker with a daily income between RM60 and RM70, while the mother Norshufinar binti Hamid, 41, is a housewife. The family adopted a seven-year-old son and also gave birth to two children, aged four and two.

After reviewing the case, One Hope Charity decided to launch a fundraiser to raise RM80,000 to save the little girl.