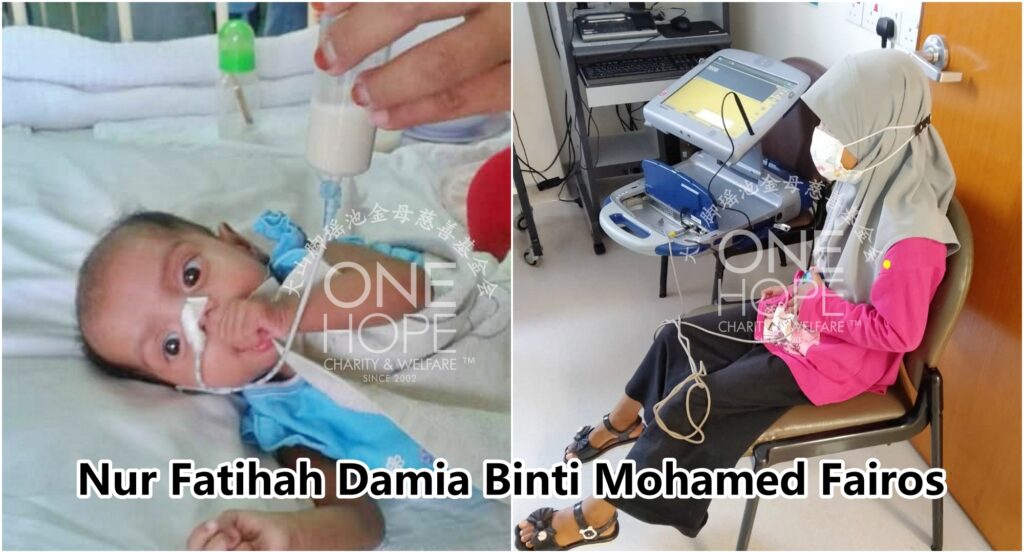 Seven-year-old girl Nur Fatihah Damia Binti Mohamed Fairos who had a hole in the heart, had a heart repair surgery when she was eight months old. She also implanted a pacemaker as her heart was weak. In July this year, she suddenly fainted when she attended the school’s sports day. After being sent to the hospital, it was found that the battery of the pacemaker was low and it needed to be replaced.

This means that the pacemaker may run out of battery at any time, so the battery needs to be replaced as soon as possible to continue her life. However, the battery replacement cost RM25,000, which is an amount that her parent, who works as a rubber tapper, is unable to afford. Therefore, they plead the public for help.

【She was diagnosed with congenital heart disease at birth, and she stayed in the hospital for three months and relied on oxygen aids to breathe】

Seven-year-old girl Nur Fatihah Damia from Manong, Perak, was sent to the incubator for observation due to delayed cry at birth. She was later diagnosed with a hole in the heart, and was confirmed to suffer from ventricular septal defect (VSD), atrial septal defect (ASD) and patent ductus arteriosus (PDA). However, she only weighed 1.8kg at that time, so she needed to wait for her weight to increase to 6kg before she was allowed to undergo a surgery.

She was treated and put under observation in the hospital for three months. She was allowed to be discharged only when she could breathe on her own. When she was eight months old, she finally reached the suitable weight for surgery, so she underwent a heart repair surgery. At the same time, as her heart was weak, she also implanted a pacemaker as her heart was weak. After that, she went for routine follow-up visits at Ipoh Hospital and a specialist hospital once every six months.

The girl is not allowed to take part in intense sports. Although she has been hoping to participate in track and field, but her condition does not allow her to do so. However, she did not suffer from any symptoms for the past seven years, and she managed to grow up safe and sound.

In recent months, the girl often suffered from shortness of breath and her face was pale. She even fainted once. During the follow-up visit at the hospital, the doctor informed that the battery of the pacemaker was almost exhausted and that the battery needed to be replaced through a surgery as soon as possible.

The girl’s 42-year-old father Mohamed Fairos Bin Mohamed Mustafa is a rubber tapper with a monthly salary of RM1,000. Her 39-year-old mother Wahidah Binti Ahmad is a housewife. The couple have nine children, aged between two and 16, and the girl is the eighth child.

After reviewing the case, One Hope Charity decided to assist in raising the medical expenses. The family members agreed to fully authorise One Hope Charity to take charge of the fundraising and collect the donations from the well-wishers on their behalf.