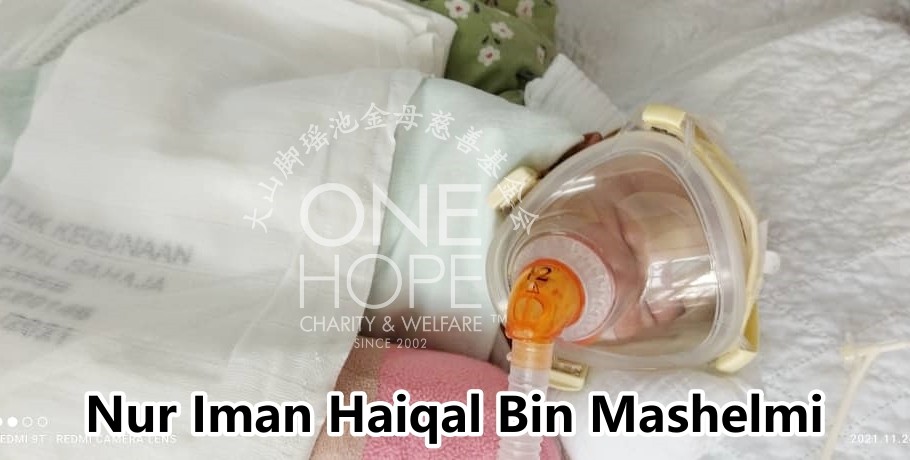 He is just three months old but he has already undergone two surgeries. The baby boy is currently being treated in the intensive care unit and he is relying on a breathing support machine to survive. He needs another surgery to save his life. His parents plead the public to help them in saving their son.

Three-month-old baby boy Nur Iman Haiqal Bin Mashelmi has already undergone two heart surgeries since he was born; and now, he needs his third life-saving surgery. However, his parents are helpless as they can’t afford the RM85,000 surgical fee.

Nur Iman Haiqal is from Penang Island. His mother went for regular check-ups during her pregnancy but she was told that her baby was normal during each check-up. The fetus was not found to have any congenital diseases. The mother gave birth to Nur Iman Haiqal naturally after a full-term pregnancy.

On September 8 this year, after the baby was born, his parents discovered that his face, hands and feet became cyanotic. However, the doctor then said that the child might be cold, which resulted his face, hands and feet turned blue. The doctor reminded the parents to observe their baby’s condition and the baby was allowed to discharge after a few days of hospitalisation.

When the baby boy was two months old, his parents brought him to a clinic for the vaccination. However, when a check on his blood oxygen was conducted, the doctor discovered that the baby’s blood oxygen level dropped to 40%. His condition was critical and was immediately referred to the Penang Hospital. The doctor performed a balloon atrial septostomy (BAS) for him on the same day to stabalise his blood oxygen status.

On November 11, the doctor decided to implant a stent in the baby boy’s heart. However, it was just a temporary measure. After experiencing two heart surgeries, the baby is currently being treated in the neonatal intensive care unit (NICU), and he still needs to wear an oxygen mask to continue survive.

The neonatal cardiologist diagnosed Nur Iman Haiqal with transposition of the great arteries (TGA) and pulmonary atresia. Therefore, he must undergo the surgery in the shortest possible time.

It is a complicated heart surgery costing RM85,000. Seeing their son fighting for his life in the neonatal intensive care unit and relying on breathing aid to survive, the parents are distraught. The family which is not well-to-do, is unable to afford the surgical fee.

The baby’s 40-year-old father Mashelmi Bin Abd Malek was a container driver with a basic salary of RM1,500 a month. After Mashelmi’s mother passed away two years ago, and he had no one to take care of his children. Furthermore, his wife does not possess a driving license. After a discussion, the couple decided that Mashelmi quit his job and became a full-time father, taking care of their children. He is also responsible for driving the family around.

After reviewing the case, One Hope Charity decided to help the baby boy in raising the RM85,000 surgical fee. His family agreed to authorise One Hope Charity to take charge of the fundraising and collect donations from the well-wishers on their behalf.