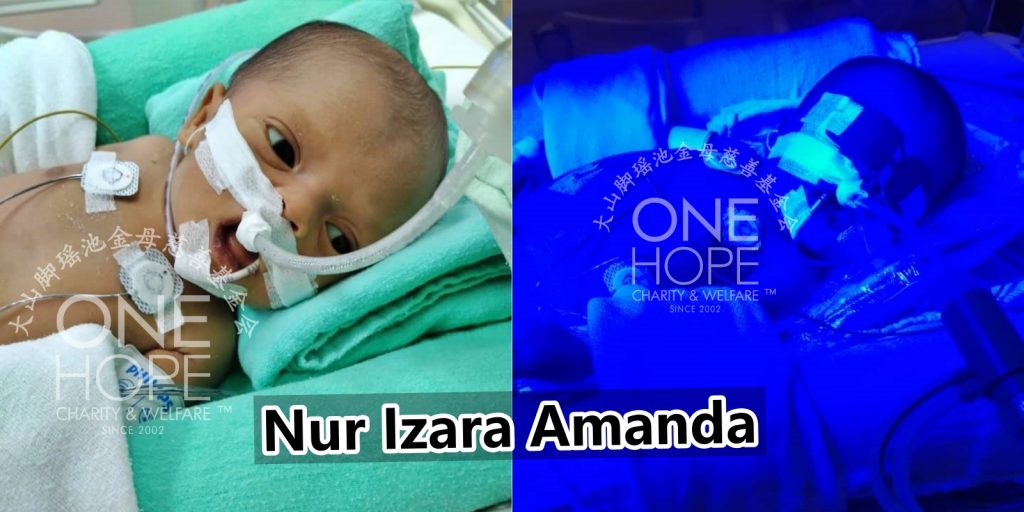 She had a miscarriage twice due to pregnancy with incomplete embryos. She was pregnant again in mid of last year and during her pregnancy, she went for routine checks, and it showed that the baby was normal. She and her husband excitedly waited for the arrival of their baby. However, their happiness did not last long. Their newborn was diagnosed with severe congenital heart disease after having difficulties in breathing, merely two days after she was born. They were so worried about their baby.

Two months old baby girl Nur Izara Amanda bt Muhammad Amirul Hafidh Zuddin from Ipoh in Perak was born on April 7. Both mother and daughter were discharged and returned home. However, the newborn developed fever and had shortness of breath after two days, and her whole body turned blue which put her parents in fear.

The parents rushed her to the hospital immediately. Examinations showed that the baby has a hole in the heart. She also suffered from cardiovascular stenosis and leaky heart valve. She is currently living on a breathing aid in the incubator in the intensive care unit (ICU).

As the short-term treatment she is receiving right now would cause her lungs pressure to rise, which would affect her lung’s function, the doctor had recommended the baby girl to undergo surgery as soon as possible, as a measure to avoid organ failure.

This is a race against time. The baby girl urgently needs RM80,000 for her life. Please help her.

【It was an excitement to look forward to the birth of their child after 10 months, but the congenital heart disease happened on their newborn has left this parents anxious and worried】

Married for three years, the wife had been pregnant twice, but she had a miscarriage for both the pregnancies due to incomplete embryos. When they learnt that the wife was successfully pregnant this time, the couple was very excited and waited eagerly for the arrival of their newborn.

From the pregnancy to delivery, everything seemed fine and normal for the mother and her baby girl, and they were allowed to discharge and returned home happily after two days. However, after two days, the baby developed fever and shortness of breath, and her whole body suddenly turned blue, which frightened her parents. They rushed her to the hospital.

The doctor conducted a detailed examination for the baby girl and found out that she has a hole in the heart, as well as cardiovascular stenosis. The baby girl was admitted to the hospital for treatment. After several weeks of treatments and observation, her condition did not improve but worsened to having leaky heart valve.

The condition of the baby girl is critical, and treatments should not be delayed. Doctor has suggested her to undergo surgery, but the surgical fee amounting to RM80,000 is a huge sum for the couple.

Her father Muhammad Amirul Hafidh Zuddin Bin Yob Ali, 26, is a car mechanic earning RM2,000 a month. His wife Nur Syuhada bt Zainal, 27, is a homemaker and both of them could not afford the medical fee of their child. Hence, they approached One Hope Charity for help.