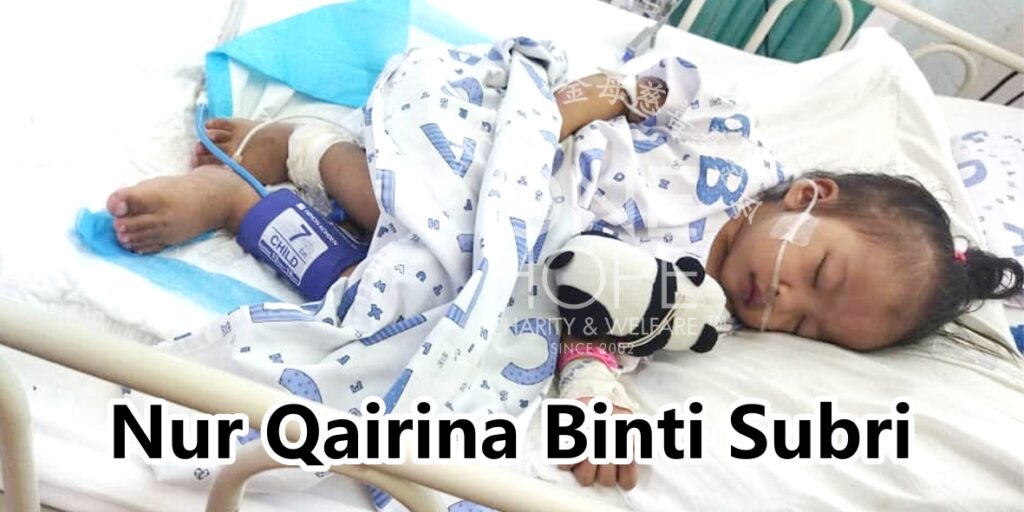 The parents hope to bring a healthy daughter back to their lovely home!

Nur Qairina Bt Subri, a baby with heart disease will become cyanotic whenever she cries or too tired. At this time, the parents will have to put the girl’s hands on her chest and let her curl up to the knees, so that she can have a better blood circulation. However, the girl’s condition became more and more serious after three years, and now, she has been admitted to the hospital for more than a month and relies on a breathing aid to survive.

In order to take better care of her daughter, the mother has stayed in the hospital with her for over a month. The doctor informed her that the girl can only be discharged after the surgery but she was unable to secure a surgery date. The hospital referred her to a specialist hospital for the surgery but the surgery that costs RM55,000 is something that the family could not afford. The parents are worried and they hope that the public can help to save their daughter.

【The baby was born at 33th week of pregnancy and was diagnosed with congenital heart disease. She stayed in the incubator for 46 days before she was allowed to go home, but she was often cyanotic and had to curl her body almost every week to get better oxygen supply】

Nur Qairina Bt Subri from Pulau Langkawi, Kedah, was a premature child. At the 33th week of pregnancy, the mother’s amniotic fluid suddenly ruptured and she was rushed to the hospital for an emergency caesarean section. Nur Qairina weighed only 1.7kg at birth and stayed in the incubator for 46 days.

Two weeks after she was born, the doctor discovered that she had shortness of breath, wheezing and cyanosis. She was brought to the state hospital and Penang Hospital for examinations, and was diagnosed with Tetralogy of Fallot (TOF). She needed to wait until she is 10kg for a surgery.

When the the girl cries or is too tired, her body will turn cyanotic. At first, the parents panicked and would send her to the hospital. Later, the doctor taught the parents to curl her body to the knee with her hands on her chest to get better blood circulation. The girl needs to repeat this action almost every week.

For the past three years, the girl has been frequently in and out of the hospital for regular follow-up visits. About a month ago during a routine visit, the blood oxygen of the girl was found to be too low, and she was admitted again to the hospital. The doctor also discovered that the hole in her heart did not shut and her blood vessels were getting narrowed, resulted in severe hypoxia in the girl. She needed an urgent BT Shunt surgery.

In order to take care of the daughter, the mother accompanied the girl in the hospital for more than a month. It was mentally challenging for the mother and at the same time, she was worried as she was unable to afford the surgical fee. The parents were helpless, hence they approached One Hope Charity for help.

The girl’s 39-year-old father Subri Bin Nyan is a self-employed plumber, earning about RM1,500 a month. Her 36-year-old mother Rusnani Bt Samat is a housewife. The couple has two other daughters, aged 15 and nine.

Due to the girl’s condition, the father has to travel to and from the hospital frequently, which affected his work and income. No one can take care of the two other children so they have to take care of themselves.

After reviewing the case, One Hope Charity decided to assist the her in raising the medical expenses of  RM55,000. The family agreed to fully authorise One Hope Charity to take charge of the fundraising and collect the donations on their behalf. For enquiries, call our hotline at 016-419 2192, 019-232 2192.