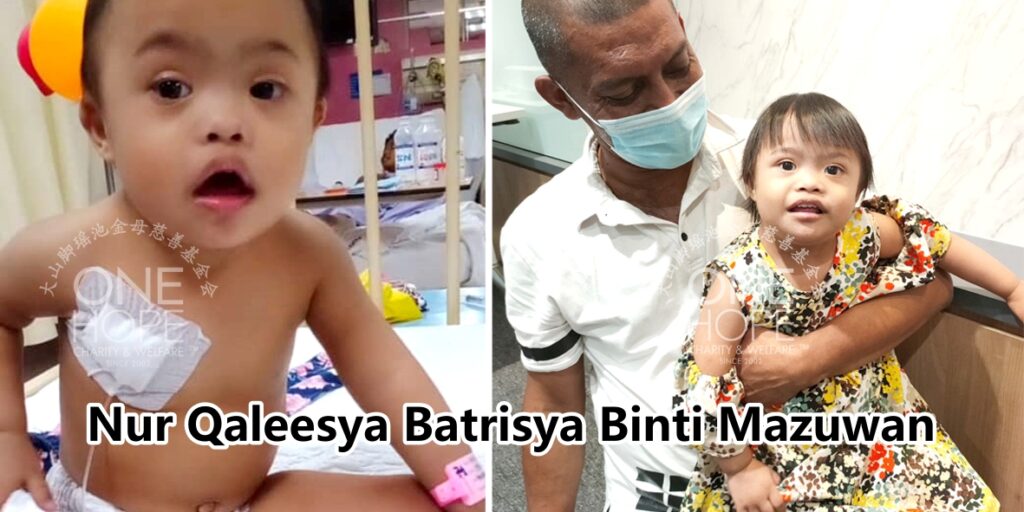 “Even if our daughter is ill, but as her parents, we will not give up on her. As long as there is a ray of hope for survival, we will never give up.”

Nur Qaleesya Batrisya Binti Mazuwan is a special child. She was found to have a swollen liver, gallstones, ovarian tumour and severe congenital heart disease. During a follow-up visit when she was 18 months old, she was found to be suffering from leukaemia. The news depressed her parents and they were distraught over the fate of their child.

However, as long as there is hope for survival, the parents will never give up. The little girl finally passed the six month’s chemotherapy and another half-year observation period, and the cancer cells are cleared. And now, she can focus on the heart surgery, but she is still short of RM80,000 surgical fee. Her parents beg the public for help.

【Although she is sick but she will still find ways to entertain herself and the people around her. During her chemotherapy sessions at the hospital, she danced to the music, filmed TikTok and brought joy to those in the hospital】

Three-year-old Nur Qaleesya Batrisya from Bedong, Kedah, was rushed to the intensive care unit due to a sudden drop in blood oxygen two hours after birth. After a thorough examination, she was found to have a swollen liver, gallstones, hole in the heart, aortic valve stenosis, and tumour in her ovary. When she was less than two months old, she had undergone a surgery to implant stent in her heart to temporarily support her life.

The child then went to the hospital for follow-up visits, and her heart surgery was supposed to be in October 2020. However, when she did a blood test during a follow-up visit, it was found that her blood platelets were low, and she was diagnosed with leukaemia after a thorough examination. She started chemotherapy in November 2020 and after six months of treatment, she completed the chemotherapy in April 2021, and then took six more months to observe her condition and follow-up.

Nearly a year later, her cancer cells have been cleared, and her other problems such as gallstones and ovarian tumour have been cured by itself. And now, the most critical issue for her is the heart problem. Her lips will become cyanotic and she suffers from shortness of breath when she moves too much. The doctor found out that the valve of her heart gradually narrowed, and a surgery that cost RM80,000 is needed as soon as possible.

Her 45-year-old father Mazuwan Bin Mahat was a tour guide that provided services to tourists from Arab. When backpacking and self-guided tours gained its popularity some six years ago, he switched his job and started working in a hypermarket with a basic salary of RM1,412. After deducting the housing and car loans, his income is not sufficient to cover his family’s daily expenses. He lives in debt every month, so he works part-time as a night-shift storekeeper until the early morning for extra income to cover the food expenses.

Her 43-year-old mother Edarozana Bt Md Darus was a clerk before marriage and became a housewife after that. She occasionally sells things online. The couple has three other children – a 15-year-old son, a 12-year-old daughter and an 11-year-old daughter. They are unable to afford their child’s medical expenses, hence, they beg the public for assistance.

After reviewing the case, One Hope Charity decided to help Nur Qaleesya Batrisya in raising the medical expenses she needed. Her family members agreed to authorise One Hope Charity to take charge of the fundraising and collect donations from the public on their behalf.