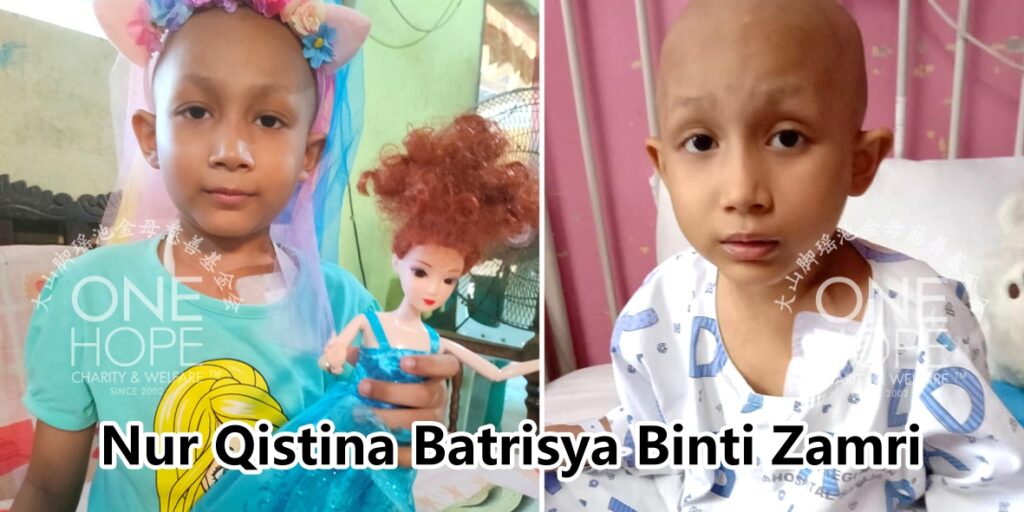 She wants to be pretty and she likes to dress up herself. However, she suffers from leukaemia and she has to face various side effects after undergoing multiple sessions of chemotherapy. Despite her health condition, the girl is still optimistic. She continues to dress up to make herself happy. What she needs now is a chance to continue survive.

Seven-year-old girl Nur Qistina Batrisya Bt Zamri was diagnosed with leukaemia three years ago and she recovered after chemotherapy. When she was preparing to attend primary school early this year, a test revealed that her cancer cell index has rebounded. She needs to undergo chemotherapy before accepting stem cell transplant from her brother.

The girl needs two courses of chemotherapy before the stem cell transplant that cost RM56,840. Her father is rubber tapper and her parents are unable to afford the medical expenses, hence they beg the public for assistance.

【She suffers from carious side effects of chemotherapy such as hair loss and pain, but the seven-year-old girl is strong and optimistic. She continues to dress up to cheer herself up】

Nur Qistina Batrisya from Kuala Ketil in Kedah, had a fever in early April 2019. She also had seven particles on her chin and ears, so her parents brought her Sungai Petani Hospital for examination. The blood test showed that she had abnormal infection, and she showed signs of lymphoma or leukaemia. The hospital referred her to Penang Hospital for detailed examination and bone marrow test, and she was diagnosed with acute lymphoblastic leukaemia (ALL).

The girl’s condition improved after chemotherapy, and bone marrow and blood tests carried out after that also showed that her cancer cell index resumed to normal level, so she stopped all the treatments in 2020.

During a follow-up visit early this year, the blood test report revealed that her cancer cell index had risen to 55% in three weeks. She started six courses of chemotherapy since February and she faced various types of side effects, such as mouth ulcers, stomach ache, archorrhagia and pain. The strong chemotherapy medication made the girl weak and not as active as before.

Unfortunately, the cancer cell index did not decrease but increased to 62%. The current chemotherapy medication is no longer effective and the doctor suggested her to replace the treatment with another type of medication, hoping to control her cancer condition. It was also confirmed that her brother’s bone marrow is suitable for her, and she can be referred to Kuala Lumpur Hospital for bone marrow transplant.

Her 40-year-old father Zamri Bin Ahmad is a rubber tapper, earning about RM800 a month. Her 41-year-old mother Juriah Bt Saad is a housewife. The couple have four other children – a 17-year-old son, a 13-year-old son and a pair of five-year-old twin daughters.

The girl was supposed to start her Year One this year, but she felt sad as she needed to undergo chemotherapy and could not attend school. Her mother comforted her and told her to take a year off and she can resume school next year.

After reviewing the case following a home visit, One Hope Charity decided to help her in raising the medical expenses of RM56,840. Her family agreed to fully authorise One Hope Charity to take charge of the fundraising and collect the donations from the well-wishers on their behalf.