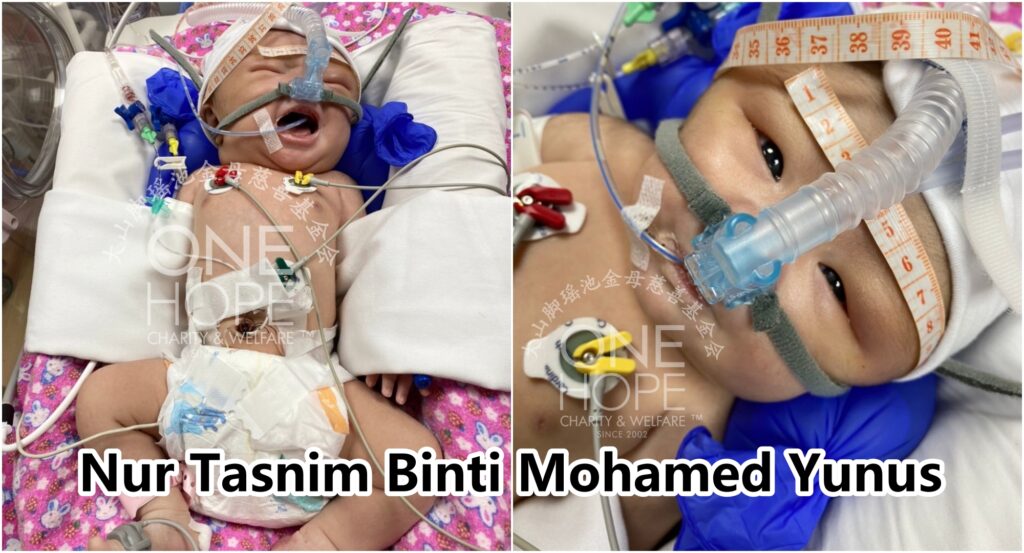 The fetus had heart and lung defects and she even suffocated during the labour. The doctor quickly conducted vacuum extraction to assist the mother in her delivery. The quick rescue managed to save the baby’s life. However, the baby needs to be treated in a special incubator for two weeks due to the sequelae, and the baby is still short of RM40,000 in medical expenses, which worried her parents.

Baby girl Nur Tasnim binti Mohd Yunus from Gopeng, Perak, was born at an obstetrics and gynaecology clinic on 5 April. During the labour, the mother tried her best and was exhausted but she was still unable to give birth to the baby. The doctor also noticed that the baby showed signs of suffocation, so the doctor immediately conducted vacuum extraction to suck the baby out of her mother’s birth canal.

The baby was successfully born but she did not cry. Four hours later, the baby became pale and suffered from hypoxia, and her condition was critical. At that time, the doctor at the clinic advised the parents to transfer her to the hospital as quickly as possible. The baby only survived on a breathing aid during the transfer process.

The government hospital in Ipoh was overcrowded, so the baby girl was forced to be transferred to the only specialist hospital with relevant medical equipment for rescue. After the emergency rescue, the baby’s life was saved, but the parents are helpless as their baby needs to be treated in the intensive care unit for two weeks, and they are still short of RM40,000 to pay for her medical expenses.

【Blood built-up in her brain resulting the back of her skull to swell 3cm. The other organs of her body also showed acidosis so the doctor conducted urgent blood transfusion to rescue her. The baby is temporarily out of danger】

The baby did not cry in the first half an hour after she was born. The doctor rushed to rescue the baby before the doctor could show the mother her child. At that time, the baby had haemorrhage in the subcutaneous tissue of the brain, and she only cried after the first half an hour after her birth. The doctor informed that the child was once suffocated. Although she had been rescued, but she still needed to be put under observation.

Unexpectedly, the baby’s condition deteriorated after four hours. Not only her whole body turned pale, but she also experienced brain swelling and the blood backflow to the brain resulted in ischemia in her other organs and acidosis. If she was not given immediate treatment, all her organs will fail and she will die.

When she was transferred to the specialist hospital, the baby was already in a critical condition. The doctor performed emergency rescue and repeated blood transfusions. The baby relied on a breathing aid to survive. It was later confirmed that she suffered from subaponeurotic haemorrhage with hypovolemic shock.

The doctor told her parents that the baby’s head circumference was 33cm when she was born, but later the head swelled to 36cm. Two days later, the baby’s red blood cells dropped drastically and the doctor carried out another round of blood transfusion. As her brain was damaged, she is expected to be staying in the intensive care unit for at least two weeks for treatment, which cost RM50,000. The parents had earlier paid a sum of amount to the obstetrics and gynaecology clinic, and now, they can only afford RM10,000 by borrowing from their relatives and friend. They are helpless as they are unable to afford the shortfall of RM40,000, hence, they approached One Hope Charity for help.

The baby’s 26-year-old father Mohamed Yunus bin Morat is a disabled person. He injured his spine in a car accident at the age of 12. As a result, the bone in her right leg was underdeveloped. The length of both his legs is different by 7cm. Coupled with the impact on the spine, he is unable to sit and stand for a long time. Despite this, he still insisted on completing a diploma course and started working as a salesman. He later started his own business by selling e-cigarettes. He earns about RM4,000 a month after deducting the costs. Her 25-year-old mother Nurul Atikah bt Khairulzaman is a housewife and they baby is their first child.

After reviewing the case, One Hope Charity decided to help baby Nur Tasnim bt Mohd Yunus in raising the medical expenses she needed.