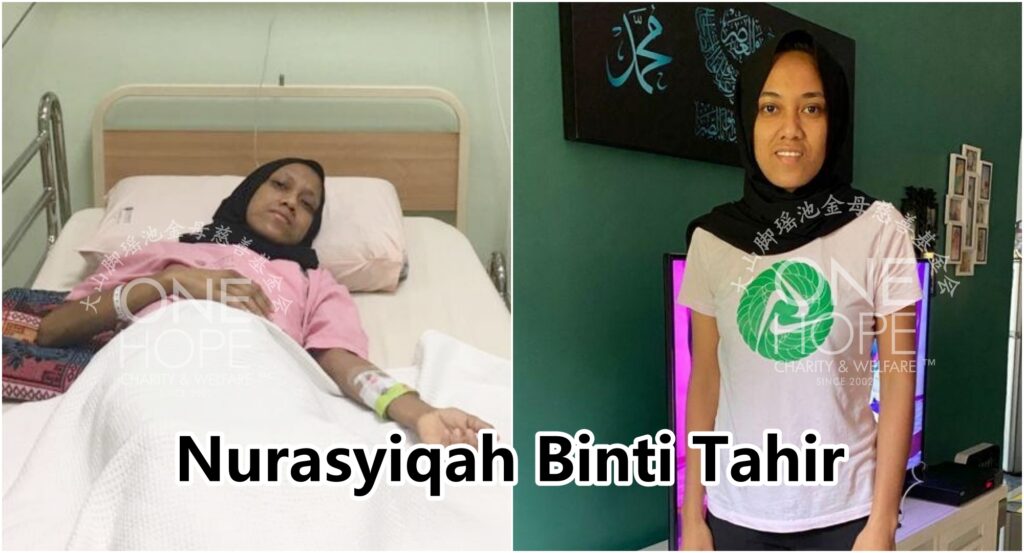 “I need to be strong for the sake of my children. My biggest wish is to take care of them until they grow up. My children need me, so please help me.”

31-year-old Malay woman Nurasyiqah Binti Tahir from Malacca was diagnosed with lymphoma in 2017. Over the years, her condition was unstable. However, for the sake of her children, she remained optimistic even when she faced the up and down of her medical condition. She also exhausted her savings in seeking and receiving medical treatment.

She has been through hard times, and now, she urgently needs RM68,000 to purchase the chemotherapy medication. Her family pleads the well-wishers to help her, so that she can get through this difficult time. Her biggest wish is to regain her health, so that she can take care of her three children, aged three, five and seven.

【The cancer cells once spread to the spine, causing her to lose the ability to move and needed to rely on a wheelchair. However, she can now move after the treatment】

After Nurasyiqah gave birth to her second child, she suddenly suffered from repeated fever in 2017. In addition, there were many red spots and small bumps all over her body. The doctor remove it for the lab test, and she was diagnosed with lymphoma. She exhausted her savings, and she even borrowed money and looked for resources so that she can be treated and cured.

During the period, she had to give up on treatment due to an unexpected pregnancy. Fortunately, the baby was born safe and sound, and the new life gave her another reason to be strong in fighting against cancer.

In late 2020, Nurasyiqah’s condition deteriorated. She was suddenly unable to walk. After examination, the doctor discovered that the cancer cells had spread to her spine and nerves, causing her to lose the ability to walk. She relied on a wheelchair to move around, and she underwent radiotherapy and chemotherapy sessions. The doctor also repeatedly changed her medicines. And now, the doctor finally found an oral chemotherapy medicine that is suitable for her but she needs to undergo six treatments, and each chemotherapy medicine cost RM34,000.

Nurasyiqah’s 32-year-old husband Azarul Fareezal Bin Abu Shaharim is a policeman with a basic salary of about RM1,700. She is a housewife, and the couple has three young children – a seven-year-old son, a five-year-old daughter, and a three-year-old son.

In 2020, her 32-year-old husband Azarul Fareezal applied for the police’s medical fund so that his wife could undergo treatment. While waiting for the approval, he also borrowed RM50,000 from his relatives and friends to pay for his wife’s medical expenses. After receiving treatment, her condition improved and now, she can move freely and resume her normal life, but she needs to take medicines constantly.

Azarul Fareezal said that since his wife was diagnosed with cancer in 2017, she did not complain, but faced it positively. She wanted to be strong for the sake of her children. The family is always her strongest support and they accompanied her through the journey of fighting the cancer. Even when she faces various side effects of chemotherapy such as vomiting, hair loss, nausea and other discomforts, but she will never give up no matter how hard she is.

He is currently applying for the government aid, but the process is time-consuming and tedious, and his wife’s treatment should not be delayed any longer, so he seeks assistance from One Hope Charity to temporarily relieve the urgent need.

After reviewing the case, One Hope Charity decided to assist Nurasyiqah Binti Tahir in raising RM68,000 to pay for the medication fee of the two chemotherapy sessions. The family agreed to fully authorize One Hope Charity to take charge of the fundraising and collect the donations from the well-wishers on their behalf.

The family agrees to allow ONE HOPE CHARITY to take charge of the fundraising and at the same time, accumulate the donations from the public. For inquiries, please contact our careline at 016-4192192 or 019-2322192.