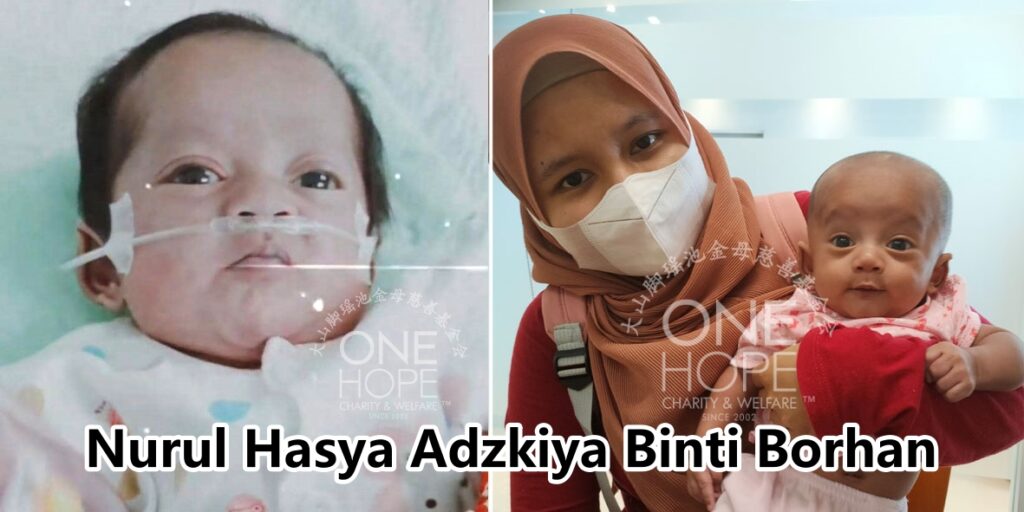 The couple were excited to welcome their first-born – a pair of twins. Unexpectedly, the mother experienced a series of conditions during pregnancy, and she finally waited until the day when the twins were born at full term. The elder sister was discharged from the hospital nine days after birth, but the younger sister was diagnosed with hole in the heart, aortic stenosis and other heart issues. She has undergone a heart surgery to place a stent in the heart to ease her condition before she was one month old, and was discharged after being hospitalised for 75 days.

Four months later, a follow-up examination recently showed that the younger sister’s heart aortic valve failed to expend and she needed a surgery. However, the parents are unable to afford the surgical fee of RM50,000, hence they approached One Hope Charity for help.

【The younger sister may fall ill at any time. The doctor has to teach the parents how to perform newborn cardiopulmonary resuscitation (CPR) so that they can provide first aid to save the baby when needed】

Four months old baby girl Nurul Hasya Adzkiya Bt Borhan from Jitra, Kedah is the younger sister of the twins. Their mother suffered labour contraction at around 5am on 27 February, and was sent to Alor Setar Hospital. However, her cervix was not completely dilated at 3pm, so the doctor decided to perform an emergency caesarean section, worrying that the babies would suffer from suffocation.

The elder sister Nurul Hessa Adzkayra cried after birth and weighed 1.9kg. As for the younger sister Nurul Hasya Adzkiya, she only weighed 1.18kg, and she did not cry. So the duo were sent to the intensive care unit for examination.

The elder sister stayed in the intensive care unit for nine days and was discharged from the hospital in good health. However, the younger sister stayed in the intensive care unit for 75 days. The younger sister was discovered to have heart murmurs on the second day of birth, and her oxygen level dropped drastically. She was referred to the Penang Hospital for thorough examination, and it was revealed that she suffered from Tatralogy of Fallot (TOF). She underwent a stent placement surgery to temporarily relieve her heart disease on 17 March before she was one month old.

After that, the younger sister was discharged and attended regular follow-up visits. The doctor also taught the parents on the method of performing newborn CPR, so that emergency first aid rescue can be performed when the baby has hypoxia or cardiac arrest before the child arrives at the hospital.

The younger sister currently weighs 3.3kg. In a recent follow-up visit, the doctor informed that her blood vessels were not dilated and the oxygen level in her body had dropped sharply. She needed to be referred to a specialist hospital for a Blalock-Taussig Shunt.

Her 28-year-old father Borhan Bin Zolkeffli was a factory operator, with a monthly salary of RM1,200. Her 26-year-old mother Nurul Ain Halimatusaadiah Bt Nasrudin is a special education teacher. She is teaching in a secondary school in Langkawi, with a salary of RM2,391.

As the wife was pregnant with twins, Borhan resigned in December last year and went to Langkawi to accompany his wife. And now, he has become a full-time dad to take care of the younger daughter. Currently, the elder sister is being taken care of by her grandmother.

The expenses after the birth of the twins have become double, and the couple also needs to travel to Alor Setar and Penang Hospital for the baby’s follow-up visits. They are unable to afford her medical and surgical expenses, hence they approached One Hope Charity for help.

After reviewing the case, One Hope Charity decided to help baby Nurul Hasya Adzkiya in raising RM50,000 for her medical expenses. Her family agreed to fully authorise One Hope Charity to take charge of the fundraising and collect the donations from the well-wishers on their behalf.