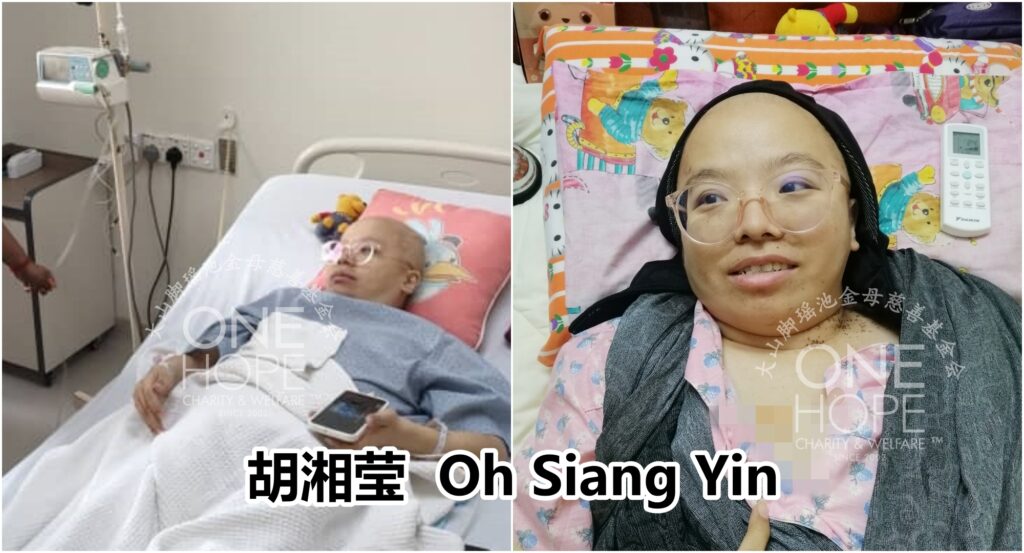 Thirty-one years old is supposed to be where one will shine and excel, but Oh Siang Yin's fate is different. At the age of 31, she must face the hardship of fighting cancer.

She always put a smile on her face. However, many may not know that she has to deal with cancer and face the side effects of chemotherapy, but she chose to be optimistic. She had once lived in desperation when she was diagnosed with cancer. She also lived in fear when she learnt that she was "about to die".

After a cancer diagnosis, 31-year-old Oh Siang Yin from Bukit Mertajam, Penang, found a treatment plan. With her family's support, she finally had the motivation to live. However, Siang Yin and her family struggle as they cannot afford the substantial medical expenses. They hope the public can help them with the shortfall of RM55,000 in medical costs so that she can recover.

She also hopes that she can continue helping others after she recovers. Her perseverance to survive touches many hearts.

【There was a small lump in her breast, but the diagnosis showed that it was non-malignant. Unexpectedly, it became bigger during the three years of lockdown. The breast also started to bleed. Therefore, she went for medical treatment and was diagnosed with terminal breast cancer】

Siang Yin discovered a small lump in her breast in 2019. She went to the hospital for an examination, and the doctor told her it was non-malignant, so she could consider removing it. Unexpectedly, the city was locked down when she was about to undergo surgery.

In 2021, a wound appeared on the lump and started to bleed. At first, Siang Yin cleaned the wound on her own but later discovered that it hurt so much when she touched it. So she decided to see a doctor and was later diagnosed with breast cancer. She underwent five sessions of radiotherapy and chemotherapy, and her condition improved.

In the middle of this year, Siang Yin had severe neck pain. She went to the hospital in August for a test. The doctor confirmed that the cancer cells had spread to the spine. The doctor informed her that her condition was not good and referred her to the hospice ward.

Her family members were unwilling to give up, so they actively sought medical treatment plans for her. Finally, the cancer hospital's doctor suggested she undergo chemotherapy and radiotherapy alternately and receive Zolex injection with hormone-regulating medicines. After nearly three months of treatment, Siang Yin's getting better. She can now remove her neck guard and sit up slowly.

Examinations also revealed that her cancer cell index has gradually decreased. She continues with chemotherapy and physiotherapy. She uses ambulance services to go to the hospital, and the doctor also told her that removing the tumour depends much on her condition.

Siang Yin was a clerk with a monthly salary of RM1,600 before she was ill. She needed to quit her job for treatment. Her mother is a coffee drink promoter in a supermarket with a meagre income. Her boyfriend also stopped working to care for his girlfriend round the clock.

After reviewing the case following a home visit, One Hope Charity decided to assist Oh Siang Yin in raising the shortfall of RM55,000 for her medical expenses. Her family agreed to fully authorise One Hope Charity to take charge of the fundraising and collect donations from the well-wishers on their behalf.