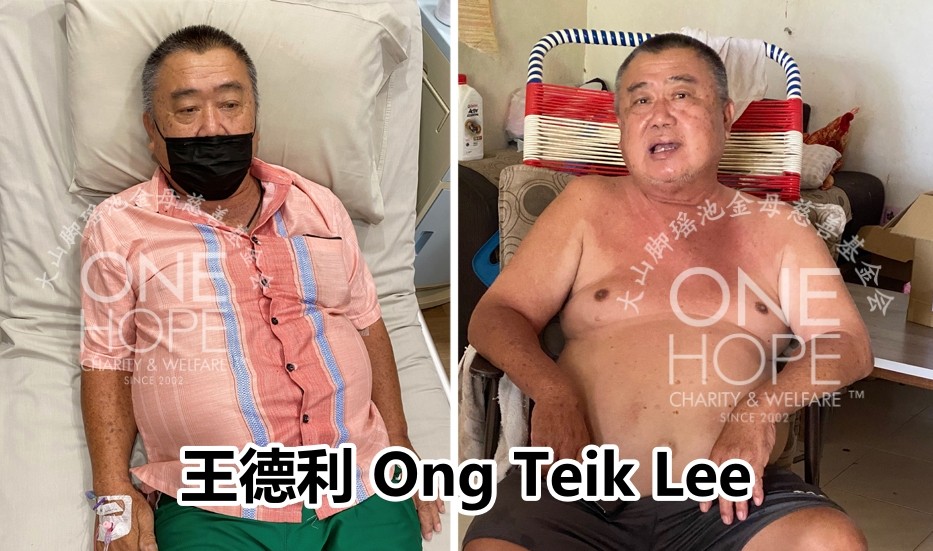 “Please help me this time. If I can survive, I will continue to work and contribute back to the society.”

63-year-old Ong Teik Lee used to own a car repair workshop, but he closed his workshop about 10 years ago after a stroke. After spending all his savings for treatment, he gradually recovered. However, he was diagnosed with blockage in three heart vessels and needed to undergo an urgent surgery, but he can’t afford the RM30,000 surgical fee.

Teik Lee is from Bukit Mertajam in Penang. For the past six months, he always experienced shortness of breath and breathing difficulty. He always felt dizzy and might faint anytime. He wanted to seek for medical treatment but no avail. He was later transferred to Alor Setar for examination and was diagnosed with blockage in three heart vessels. He is in urgent need for a life-saving surgery, but the hospital did not schedule him for the surgery.

For the past few months, he will feel very ill sometimes. He told his friends that if they don’t see him for three days, they must help him to contact his family. In spite of this, he is still trying hard to make sure he survives. Hence, he contacted One Hope Charity for help, and was referred to Penang Hospital for examination before being referred to a specialist hospital for his heart surgery.

【In May last year, his was diagnosed with squamous cell carcinoma. He had completed his treatment and has completely healed. And now, he is in an urgent need to undergo a life-saving heart surgery】

Teik Lee was a car repair workshop owner with six employees. However, he suffered a stroke about a decade ago which forced him to close down the shop. He also spent a lot of money on his treatment after he was discharged from the hospital.

He suffered from squamous cell carcinoma on his middle finger of his right hand since early May last year and has been going for regular follow-up visits. During one of the follow-up visits in the hospital, the doctor discovered that he had shortness of breath and suspected that he was suffering from heart problem, so the doctor advised him to go for a heart check.

In early September this year, he went to seek treatment at a clinic after he suffered from breathing difficulty. The doctor also found out that he has heart problem and referred him to Alor Setar Hospital for a thorough check. After staying in the hospital for five days and underwent an angiogram procedure, it was confirmed that three of his heart vessels were blocked.

He later went to Penang Hospital for medical consultant. As his condition was critical and may be in danger and lost his life anytime, he was referred immediately to a specialist hospital for surgery.

Teik Lee had been relying on his savings after a stroke. After that, he started to take up dishes washing job at a coffee shop to support his cost of living. He is a divorcee, and his 21-year-old son is a foreman. His son does not have stable income and is unable to help him with the medical fee. Hence, he approached One Hope Charity for help.

After reviewing the case, One Hope Charity decided to help Teik Lee. His family agreed to authorise One Hope Charity to take charge of the fundraising and collect donations from the well-wishers on their behalf.