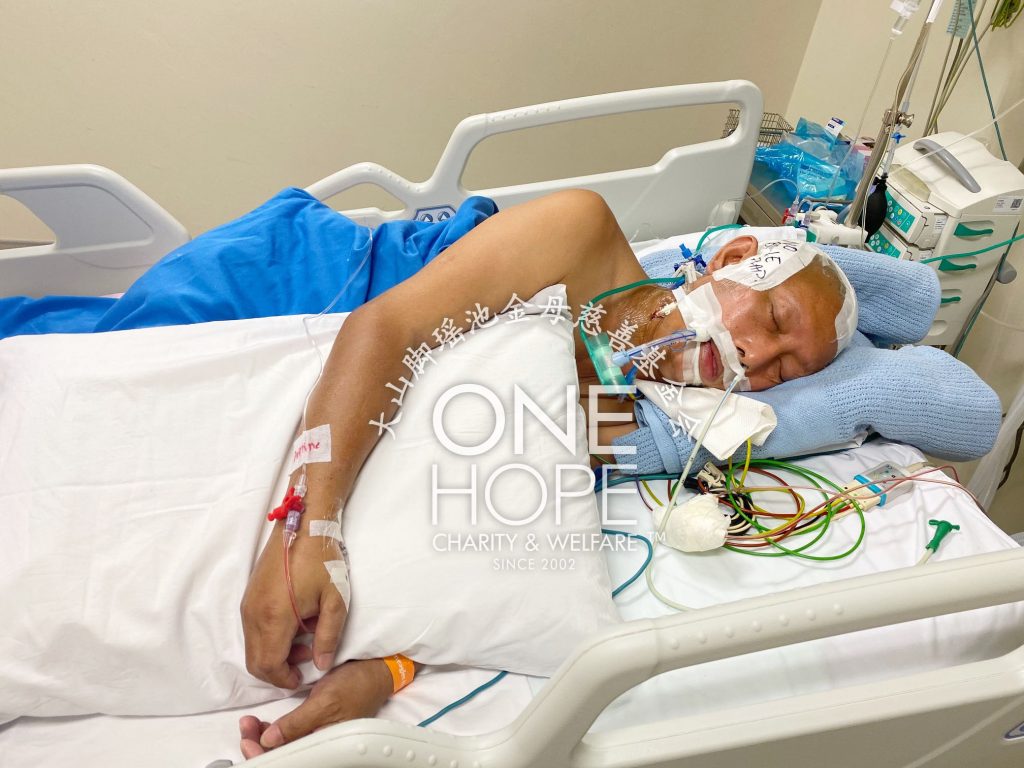 A mother and son had been selling Jawa noodles in a restaurant at Ayer Itam, but the 55-year-old son suddenly fell to the ground when working. After being taken to the hospital for examination, it was found that he had a cerebrovascular burst and needed emergency surgery to save his life.

In a brink of emergency, both the mother and wife were left no choice but to allow him to undergo the surgery. At the same time, they have been preparing nearly tens of thousands of ringgit for the medical expenses. However, the patient needed another surgery for hydrocephalus after his last operation, and the surgery fee inflated to around RM150,000. The mother and wife had even used up their own savings and even for the coffin, but can only bear around RM38,000. With these huge and unbearable medical expenses, they approached One Hope Charity for help.

【A caring, filial man sets up a noodle stall together with his mother, and under the care of his wife. But the sudden stroke has put the whole family in a desperate situation】

On Feb 28, Ooi Chun Phin, 55, was working in the restaurant as usual until he felt weak and fell onto the ground. His mother and other passerbys took him to a nearby clinic. The doctor said that he urgently needs to be sent to a hospital for injection. Without any delay or hesitation, the mother rushed to the hospital with her son to a specialist hospital.

After careful examination, it is found that he is diagnosed with a vascular rupture in the brain, and required immediate surgery to save his life. The surgery fee was RM50,000. The mother in her seventies agreed for him to undergo surgery and had planned to earn the money by any means necessary to save her son. However, after the surgery, the patient had to undergo another surgery due to hydrocephalus after the operation. The doctors needed to remove the fluid accumulating inside his brain. Hence, the medical expenses continue to rise.

To date, Ooi Chun Pin’s has yet to fully recover after the fluid was removed from his brain. He is still relying on breathing aid in the ICU ward and requires to undergo tracheostomy surgery in order to not have to rely on the breathing aid. The medical expenses were inflated up to RM150,000.

His 71-year-old mom and the 46-year-old wife had been trying to collect funds here and there, but only managed to get around RM38,000. Not only are they worried for Chun Pin’s medical condition, but the heavy medical expenses have placed them in a tight spot.

The patient and his mother sell Jawa Mee at the coffee shop near Ayer Itam market, making an earning of around RM2,000 per month. On the other hand, the patient’s wife works in a flower shop, with a monthly income of RM2,550. The two of them had a good life and supported each other, but the sudden stroke has put the family in a difficult situation.

They approach One Hope Charity for help and hope that the patient can be transferred to a government hospital for further treatment once his condition becomes more stable. The subsequent treatment costs would be borne by other family members. The family members planned that once the patient was discharged from the hospital, it will be taken care of by his 84-year-old father and his younger brother, who’s currently unemployed.

After receiving the emergency request from help and conducted the review via home visit, One Hope Charity agreed to take charge of the case and help launch a fundraising event to raise RM130,000, including the subsequent medical treatment expenses.